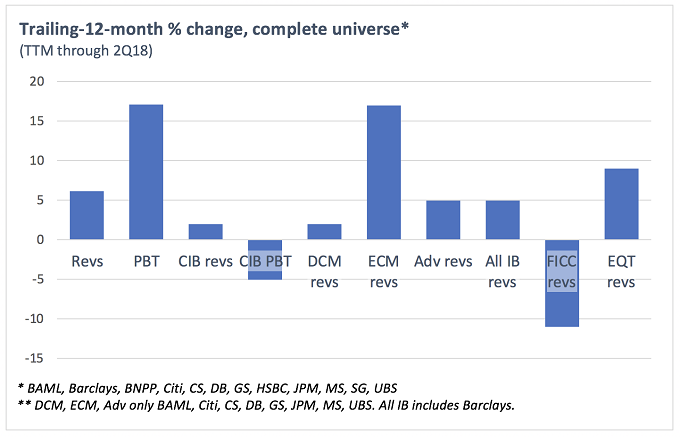 First, a graph. There will be lots of these.

In summary, PBT growth driven by lower costs more than by higher revenues, those costs proving harder to cut in CIB divisions than elsewhere, DCM sort of flat, advisory up a bit, ECM looking great, FICC having a shocker and equities building nicely.

Now for the breakdown – and the usual disclaimers. Numbers are unadjusted wherever possible. Banks’ percentage change figures reflect reporting currency; aggregate changes reflect US dollars. Not all banks report in the same way, or even at all in certain areas (particularly for advisory, ECM and DCM).

Part 2 tomorrow will have DCM, ECM and Advisory. Part 3 on Thursday will look at FICC and Equities.

It didn’t quite match the first quarter of the year, but 2Q18 otherwise saw the highest revenues for our band of 12 since 2015, as the total rose 6% year-on-year to $151 billion. One stat in particular shows that the momentum is good: every bank in the group is showing higher trailing-12-month (TTM) revenues than it posted in the full year 2017, with JPMorgan and Goldman Sachs showing the biggest positive difference. Also worth pulling out is the fact that Bank of America Merrill Lynch, our pick for World’s Best Bank in this year’s Euromoney Awards for Excellence, has clocked up the best first half revenues in its history.

2Q18: The highest year-on-year growth was from Société Générale, at 24%. If that looks startling, it’s worth noting that it was off the bank’s worst performance in years in 2Q17. Goldman’s 19% jump – the second biggest in the pack – is probably the more significant number here: its $9.4 billion of revenues was the highest for the firm since the first quarter of 2015 as it arrested a perilous decline in its FICC business.

With $27.7 billion, top of the pack in absolute terms was JPMorgan, as it was this time last year. Credit Suisse was the smallest again, with $5.6 billion. Morgan Stanley is on a roll: it’s only the second time that the firm has posted revenues of more than $10 billion – the first being in 1Q18.

TTM: Revenues for the 12 banks were up 6% to $588 billion on a 12-month basis. The only fallers were Barclays, BNP Paribas and Deutsche Bank. The highest growth was from HSBC, while the biggest fall was at Deutsche. JPMorgan has become even bigger than the rest. Its TTM revenues of over $105 billion make it nearly 20% bigger than BAML. In FY17, that difference was 15%. Fun fact: in the last 12 months, JPMorgan has more revenues than Barclays, SocGen and Deutsche combined.

Pre-tax profits for our 12 clocked up a better quarter than any other in the last few years, up 14% year-on-year to about $50 billion. Deutsche is showing lower TTM profits than it posted in 2017, but that was to be expected.

More interesting is Barclays, another bank where TTM profits are down from FY17, after a tiny profit in 4Q17 and a loss in 1Q18. But the mantra there is all about how the most recent quarter is the first to be “clean” after various restructuring shenanigans. And that’s not just fluff: its 2Q18 really was its best result in years, and it topped the growth list, nearly tripling its quarterly profits year-on-year.

2Q18: Away from Barclays (see above), it was Credit Suisse that was the second best climber in the quarter, with profits that were slightly down from the first quarter but were the next best it has seen in the last three years. Bear in mind that in 2016 and 2017 it never once managed a quarterly profit of more than $670 million (compared to this quarter’s more than $1 billion) – and it posted big full year losses in 2015 and 2016. The turnaround masterminded by CEO Tidjane Thiam, our pick for Banker of the Year in 2018, is bearing fruit. The only faller in the quarter was Deutsche.

The biggest profit, of $10.5 billion, was at JPMorgan again. Deutsche was the lowest, with $831 million, replacing Credit Suisse.

TTM: Last 12-month PBT for the universe was up 17% year-on-year, to $167 billion. Credit Suisse’s and Deutsche’s prior periods were negative, so by definition they top the list of year-on-year increases. Otherwise the top climber was HSBC, which managed a jump nearly as big as its revenue increase. They were not representative of the pack, though, which topped out at UBS’s 19% jump. BNPP and Barclays (see above again) were down a bit.

CIB divisions are not always comparable between institutions – the universals have their giant corporate banking arms; some firms include smaller commercial banking while others don’t. But however you look at it, the three giants of BAML, JPMorgan and Citi are growing more dominant as the Europeans shrink and fade. In 2Q15, the three clocked up 39% of the universe’s CIB revenues. In 2Q18 it was 45%.

The 12 were up 6% in aggregate for the quarter, to $63 billion, putting it just below 2Q15. No bank is showing TTM revenues below FY17, but BNPP is flat and several others are close. Morgan Stanley, Goldman and JPMorgan are looking the best in comparison.

2Q18: Morgan Stanley goes from strength to strength in its steady climb from the low spot of 4Q15, when it took the axe to its fixed income franchise costs to make it fit for the future. That future is now, and it’s working out nicely. The firm tops the chart of year-on-year increases in CIB revenues, with 20%. Otherwise it’s mostly a single digit show, with Deutsche and BNPP the only fallers. BNPP’s number needs qualifying – it’s off an unusually strong first half last year and would otherwise be the bank’s best result for two years.

The biggest revenues were at JPMorgan, at $9.9bn, while the smallest were at UBS with $2.1bn. This time last year JPMorgan was third behind Citi and BAML – although all three are usually close. UBS was still the smallest business last year, though.

TTM: No one is up hugely on a TTM basis. Revenues for the universe were $240 billion, up 2%, with Morgan Stanley again showing the best momentum, up 9%. At the other end is Deutsche, down 14%. Worth noting is Citi, for its lead in absolute terms: the bank was our pick for World’s Best Investment Bank this year, and its CIB revenues are now the highest on a TTM basis, at $37 billion.

CIB profits didn’t move anything like as much as those at group level for our 12 banks, with an aggregate increase of 5% year-on-year in 2Q18 to about $23 billion. But that was still a promising number – particularly as firms are getting better at cost efficiencies and deploying leverage into higher yielding areas. In fact, the quarterly total is the second highest (after 1Q18) in our dataset back to the start of 2015. Deutsche is joined by BNPP and SocGen in showing weaker momentum, though, with TTM profits below those of FY17.

2Q18: There’s always some suspense in Goldman’s CIB profits, since the firm doesn’t release them when it announces results but waits until its 10-Q filing, which is usually a couple of weeks later. It duly filed on August 2, showing a 33% increase, the highest of the group and well surpassing its revenue growth of 17%. Sure, it’s flattered by an unusually poor period the year before, but it shows the firm is not wasting much time in recasting its FICC franchise and grabbing as much ECM work as possible – of which more later.

Elsewhere, Morgan Stanley looked smart and so did UBS, both on 26%. UBS has quietly posted by far its best half-year result for years and is already only just behind its full year 2017. At the other end of the spectrum is BNPP, although as previously noted, its result is off a very high comparable period. Excluding that, its quarterly CIB profit is its best since 2Q15.

The biggest PBT for the quarter was at JPMorgan, with $4.4 billion, with Deutsche inevitably lagging at the bottom, with just $555 million.

TTM: CIB trailing-12-month profits are the first number so far to have fallen for the group of banks as a whole year-on-year, dropping 5%. But that’s down to a poor 2H17 rather than the first half of 2018 – which has been very strong and was 6% higher than the first half of 2017. Top of the movers is Morgan Stanley, with Deutsche bottom. The French are hurt by a poor first quarter of 2018, particularly at SocGen.