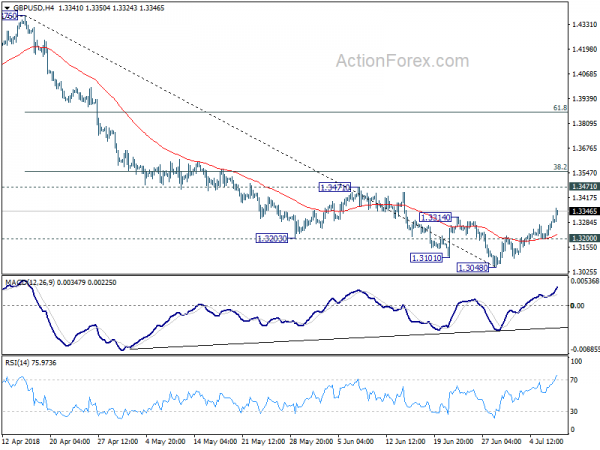 The global stock markets are in positive mood today. Major European indices open higher, following the strengthen in Asian markets. At the time of writing, FTSE is up 0.27%, CAC is up 0.25%. DAX lacks momentum but is still holding on to 12500 handle, up around 0.1%. US futures also point to higher open. Australian Dollar rides on the return of risk appetite, or receding risk aversion, to trade as the strongest one. Sterling overcomes initial volatility and is trading as the second strongest one. The markets seems to be embracing the departure of Brexit Minister David Davis as a positive thing. Euro is following as the third strongest. On the hand, Dollar and Japanese yen are under broad based pressure.

Davis resignation viewed as positive by the markets

It’s generally perceived that after last week’s locked up meeting in the Chequers, UK Prime Minister Theresa May has achieved sort of unity in her cabinet for a “softer Brexit”. The white paper will be formally published on Thursday. In the mean time, May will talk directly to European leaders for support on her new plan.

Brexit Minister David Davis’s resignation today was a shock to the markets. But that on the other hand showed there is clear understanding within the cabinet. That is, consensus was made and one has to take it or leave. Former Minister of State for Housing Dominic Raab is appointed as the new Brexit Minister. The development is so far viewed as positive by the markets.

Davis: May is good PM but the Brexit plan is a dangerous strategy

Ex-Brexit Minister David Davis told BBC Radio that PM Theresa May’s Brexit plan had a “number of weaknesses” and gives away “too much” to the EU. He called that a “dangerous strategy”. And he said he was clear after Friday’s that that he was the “odd man out”.

Nonetheless, Davis also said he “won’t be encouraging people” to mount a leader change in the UK and added that “I like Theresa May, i think she is a good PM”. And he didn’t expect others ministers to follow him to resign. He said “the simple truth is people can only make these decisions of conscience, decisions of principle by themselves, in their own minds,”and you can’t make the decision for somebody else and you can’t offload it on somebody else.”

Eurozone Sentix Investor Confidence rose to 12.1 in July, up from 9.3 and beat expectation of 9.0. Sentix noted in the release that Eurozone expectations may “stabilize slightly” after the sharp fall in June. But that seems more of a “technical counter-movement”. It noted that the Economic Index for Germany had dropped for the sixth time in a row to just 16.2.

Also, the next of of trade dispute between the US and the rest of the world “has been reached and countermeasures by the EU and China are under way. Sentix noted if Trump now targets the European car industry, the “trade dispute could lead to more than a slowdown in economic sentiment.” At the same time, central banks, at the path of stimulus remove, are “unlikely to play a support role”.

Sentix added that the “global environment is also showing more and more signs of an economic slowdown. For Japan, for example, we are recording the sixth consecutive decline in the overall index and economic expectations for Asia ex Japan are slumping by more than 10 points. US economic expectations are also falling to their lowest level since August 2012.”

Also released in European session. Swiss unemployment rate dropped to 2.6% in June. German trade surplus widened to EUR 20.3B in May.

BoJ Governor Haruhiko also said in the meeting of the regional branch manager that “Japan’s economy is expected to continue expanding moderately.” But ultra-loose monetary policy would be maintained until inflation hits target.

Nonetheless, Yasuhiro Yamada, manager of the BOJ’s Osaka branch, warned that “Many companies in the region say (protectionism) is the number one risk. They are worried about the huge uncertainty over the trade outlook.”

China’s foreign currency reserves rose USD 1.5B in June to USD 3.1121T, up 0.05%. The State Administration of Foreign Exchange spokesperson said that the China’s foreign exchange market was “generally stable”. Due to strength in the US Dollar and change in asset pricing, the overall currency reserve rose slightly.

SAFE also noted that since the start of the year, China’s economy has “maintained a steady trend”. But there were “divergence” in global recovery, heightened trade friction, capital out-flow and currency depreciation pressure in emerging markets. Though, China’s cross-border capital flowed remained stable.

GBP/USD’s rebound from 1.3048 short term bottom continues today and reaches as high as 1.3362 so far. Intraday bias stays on the upside for 1.3471 resistance. At this point, we’d strong resistance from 1.3471 to limit upside to finish the corrective rebound. On the downside, below 1.3200 minor support will turn bias to the downside for retesting 1.3048 low.