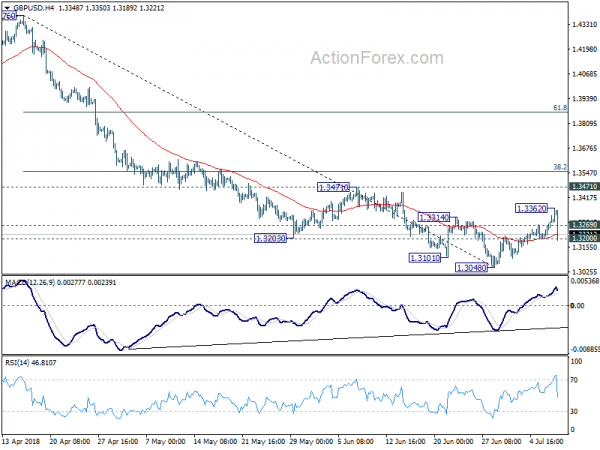 While the reaction to former Brexit Minister David Davis was largely muted, the situation seemed to change drastically after adding former Foreign Minister Boris Johnson. Prime Minister Theresa May wanted to provide certainty to UK businesses with her locked up meeting in the Chequers with cabinet last Friday on a unified Brexit position. But now it turns out that there are more uncertainties with her position weakened drastically.

The disapproval of May’s softer Brexit approach seems to be rather loud today. And May’s own position as PM looks more shaky then ever. It’s speculated that Johnson is preparing to launch a leadership challenge against May. And there are increasing push for a confidence vote on her. Even if May could hang on, the new Brexit White Paper that’s scheduled to be released on Thursday could be dead on arrival.

Sterling’s reaction to Johnson’s resignation suggests that markets are now taking it seriously.

GBP/USD edged her to 1.3362 earlier today but reversed sharply. The breach of 1.3200 minor support now suggests that corrective rise from 1.3048 has completed already. Initial bias is now back on the downside for retesting 1.3048. Break will resume larger down trend from 1.4376. On the upside, above 1.3269 minor support will suggest temporary stabilization and turn bias neutral first. Also even if rebound from 1.3048 manages to resume through 1.3362, as it’s seen as a correction, we’d still expect strong resistance from 1.3471 to limit upside to complete it.

GBP/JPY’s sharp fall also suggests that rebound from 143.76 has completed at 147.60. Intraday bias is turned neutral first with focus back on 145.17 minor support. With 148.10 resistance intact, more decline is in favor. Below 145.17 minor support will argue that the consolidation pattern from 143.18 has completed and should bring retest of this low. Break there will resume larger fall from 156.59.