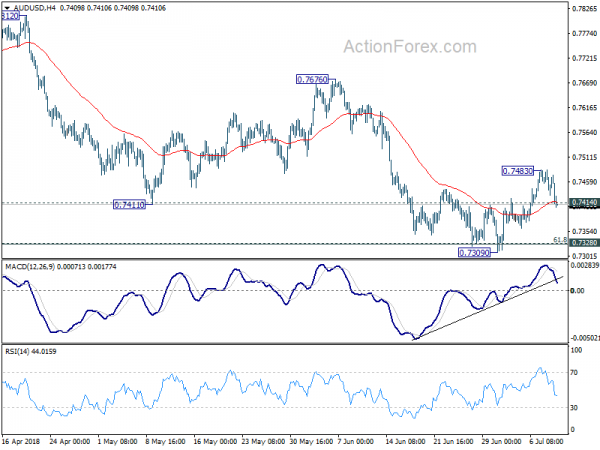 Yen and Dollar are both strong as the US announced to move on with 10% tariffs on another USD 200B in Chinese imports. That could come into effect as soon as in September. Asian Markets are broadly in red. At the time of writing, China Shanghai SSE is down -1.87%, Hong Kong HSI is down -1.44%, Japanese Nikkei is down -0.93% and Singapore Strait Times is down -0.84%. But all these indices are basically off initial low, suggesting that there is no panic selling so far. Commodity currencies are the weakest one with Australian Dollar leading the way down, followed by New Zealand Dollar. Canadian Dollar is the third weakest even though markets are expecting a BoC rate hike today.

Technically, 2800 is an important level for China SSE, currently at 2774. The index defended 2700 last week, which was reasonably close to 2016 low at 2638.3 (a key support as the lowest since 2014). The stage was originally set for stronger rebound to digest the sharp fall from January high as 3587.03. Regaining 2800 before the end of the week will keep investor confidence that it’s till on track for that recovery. But failure to do so will put focus back to key support zone between 2638/2700, which will further weigh down sentiments in Asia.

In the currency markets, AUD?USD’s break of 0.7414 minor support suggests recovery from 0.7309 is completed and deeper fall would be seen back to retest this short term bottom. USD/CAD defended 1.3067 key support earlier this week, which maintains near term bullishness. And focus is back on 1.3159 resistance ahead of BoC. EUR/USD, despite yesterday’s fall, is holding on to 1.1679 minor support. 1.1679 in EUR/USD and 1.3189 in GBP/USD will continue to be in focus to gauge when Dollar is finally completing recent corrective pull back.

US announces 10% tariffs on USD 200B Chinese imports

Trump administration announced the plan to impose tariffs on additional USD 200B of Chinese imports, as follow up action to Section 301 investigation. The list of targeted products is released, including consumer items such as clothing, television components and refrigerators as well as other technology products. There will be 10% tariffs on the products, which could come into effect after public consultations end on August 30. After imposition, the Section 301 tariffs will cover as much as half of Chinese imports to the US.

The US Trade Representative Robert Lighthizer said in a statement that “for over a year, the Trump administration has patiently urged China to stop its unfair practices, open its market, and engage in true market competition.” And, “China has not changed its behavior — behavior that puts the future of the U.S. economy at risk. Rather than address our legitimate concerns, China has begun to retaliate against U.S. products. There is no justification for such action.”

Trump’s actions on China drew heavy criticism from the retail industry. The US Retail Industry Leaders Association issued a statement swiftly and said condemned Trump for breaking his promise to bring “maximum pain on China, minimum pain on consumers”. It said that “consumers, businesses and the American jobs dependent on trade, are left in the crosshairs of an escalating global trade war.” And the group warned that Trump “cannot continue to move the goal post. Unless the Administration finds meaningful solutions, American businesses, families, and jobs are on the losing end of this battle.”

Separately, a spokesperson of the US Chamber of Commerce warned that “tariffs are taxes, plain and simple. Imposing taxes on another $200 billion worth of products will raise the costs of every day goods for American families, farmers, ranchers, workers, and job creators. It will also result in retaliatory tariffs, further hurting American workers.”

China shocked by US actions and opposes to US trade hegemonism

The Chinese Ministry of Commerce said in a statement that it’s “shocked” and find it “totally unacceptable” as the US accelerate the trade war escalation. It warned that the “irrational” action is “hurting China, hurting the world, and hurting itself. Also, China pledged to make “necessary counter measures” and call on the international community to defend against “trade hegemonism”. It will also file a complaint to the WTO again US unilateralist action.

The two-day summit of NATO in Brussels starting today will be a focus as the US displays increasing hostility towards Europe. Ahead of the meeting, NATO Secretary General Jens Stoltenberg noted in a statement that “we expect 8 Allies to spend at least 2 percent of GDP on defence this year, compared to just 3 Allies in 2014.” In additional, he estimated that European Allies and Canada will add an “extra 266 billion US dollar” to defence between now and 2024.

While there were promises to address the spending issue, Trump continued with his provocations as he tweeted that. “The U.S. is spending many times more than any other country in order to protect them. Not fair to the U.S. taxpayer. On top of that we lose $151 Billion on Trade with the European Union. Charge us big Tariffs (& Barriers)!”.

That was followed by European Council President Donald Tusk’s unusually blunt response: “S doesn’t have and won’t have a better ally than EU. We spend on defense much more than Russia and as much as China. I hope you have no doubt this is an investment in our security, which cannot be said with confidence about Russian & Chinese spending :-)”.

But Trump went further sand said “Many countries in NATO, which we are expected to defend, are not only short of their current commitment of 2% (which is low), but are also delinquent for many years in payments that have not been made. Will they reimburse the U.S.?” And, “The European Union makes it impossible for our farmers and workers and companies to do business in Europe (U.S. has a $151 Billion trade deficit), and then they want us to happily defend them through NATO, and nicely pay for it. Just doesn’t work!”

A showdown is expected there in Brussels. And the spats alone will likely occupy most of the air time between Trump and EU. There is unlikely any room for practical talks to avert auto tariffs and EU retaliations.

BoC rate hike widely expected, but would that be a dovish one?

Bank of Canada rate decision is the biggest event for today. BoC is widely expected to rise the policy rate by 25bps to 1.50%. Since the BOC meeting in May, at which the policymakers removed the “cautious” rhetoric, the market has been raising its bet on a July rate hike. As of today, the market has priced in over 90% chance of a 25 bps rate hike at this week’s meeting.

The ongoing uncertainty is future trade relations with the US, including NAFTA renegotiation, and US’ imposition of trade tariff and Canada’s retaliatory measures. We expect BOC to adopt a so-called “dovish tightening” at the upcoming meeting. While announcing to raise the policy rate by +25bps to 1.5%, policymakers would reaffirm the uncertainty of the trade outlook and reiterate that further monetary policy decision would depend on incoming data.

More in BOC Preview – Rate Hike Fully Priced In, Data and Trade with US Continue to Guide Future Path