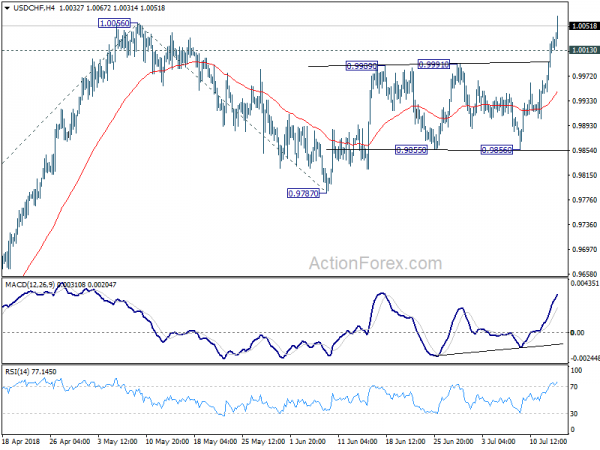 Dollar is set to close as the strongest one for the week, after today’s rally. Some setback is seen after import price index miss but the retreat is so far shallow. Yen is trading as one of the strongest alongside Dollar. But that’s mainly because it’s digesting some of the risk appetite triggered loss this week. Sterling is trading as the the second strongest, after New Zealand Dollar. The Pound appears to be hurt by the risk of losing a US-UK trade deal because of the business friendly softer Brexit plan.

In other markets, Gold breaches 1236.66 key support level and stays soft. There is no noticeable momentum for a rebound yet. WTI continues to stay steadily in tight range above 70 handle. Risk appetite is strong today with FTSE trading up 0.37% at the time of writing, DAX Is up 0.34% and CAC is up 0.38%. US futures, though, point to a flat open. But we’ll see if NASDAQ can extend the record run.

Real-life Trump toned down in front of May

As Trump is meeting UK Prime Minister Theresa May at the Chequers today, he toned down the abbrasive self again, as he used to with others. He said “we really have a very good relationship” and “today we are talking trade and we are talking military.”

Trump also disclosed that he tried to interfere with the relationship between UK and EU. “I would have done it much differently,” Trump told The Sun. “I actually told Theresa May how to do it but she didn’t agree, she didn’t listen to me. . . . I think what is going on is very unfortunate.”

BoE Cunliffe: A little stodginess needed in medium term, but it’s not a stopped approach

BoE Deputy Governor Jon Cunliffe said in a speech today that the current overshoot in inflation, headline CPI at 2.4%, is “entirely due to imported inflationary pressure.”. That has come “primarily from the post referendum depreciation in sterling plus some more recent pressure from the increase in oil prices.” But the inflationary pressure form Sterling is “already passed its peak”.

The key question now is “how much inflation is domestic economic pressures likely to generate over the next couple of years”. Cunliffe noted that “domestic inflation pressures, while strengthening a little are not yet established at levels consistent with inflation at target”. Pay growth has established itself in the range of 2.5-3.0%. But “the latest readings do not signal strongly that pay growth will make the next step to establish itself firmly in 3% territory in line with the May forecast”.

And there remains a case for a little ‘stodginess’ yet in the medium term. Though, he also emphasized that “such an approach is not, however, a stopped approach.”

New Zealand BusinessNZ Performance of Manufacturing Index dropped to 52.8 in June, down from 54.4. BusinessNZ’s executive director for manufacturing Catherine Beard said that the slow-down in expansion was mainly due to ongoing drops in a key sub-index. She pointed out that “production (51.8) experienced another decrease in expansion levels for June, which meant it was down to its lowest point since January 2017.” Nonetheless, “on a positive note, the other key sub-index of New Orders (57.1) remained in healthy territory, which at least should feed through to production levels in the coming months.”

From January to June:

In the bigger picture, rise from 0.9186 is seen as a leg inside the long term range pattern. After drawing support from 55 day EMA, it’s now resuming for 1.0342 key resistance. For now, we’d still cautious on strong resistance from there to limit upside. Meanwhile, break of 0.9787 support is needed to signal completion of the rise. Otherwise, outlook will remain bullish even in case of deep pull back.