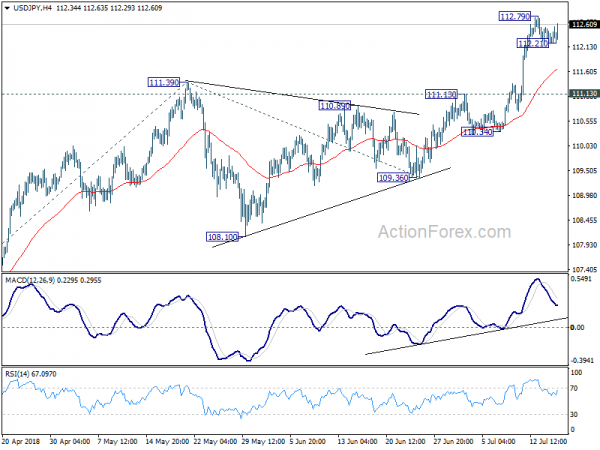 Dollar is regaining some ground as markets await Fed chair Jerome Powell’s Congressional Testimony. But still, New Zealand Dollar is the strongest one today as lifted by inflation data. Swiss Franc trades as the second strongest as European indices are trading broadly in red. There are also speculations that SNB could finally raise interest rate by the end of 2019. Meanwhile, Sterling is trading as the weakest one for today as markets didn’t take the job data positively. Yen follows as the second weakest.

Today will begin Powell’s two-day testimony, starting with Senate Banking Committee. House Financial Services Committee comes tomorrow. Expectation is rather low on the event. Fed’s rate path is clear for the near term, that is two more hikes in 2018. Recent economic data support the path, with solid job market and improving inflation. Powell will most likely reiterate the views as see in the minutes of the June 13 FOMC meeting.

Nonetheless, his views on the topic of flattening or even inverting yield curve might raise some eyebrows. Minneapolis Fed President Neel Kashkari said in an essay released yesterday that ‘This time is different’ are the four most dangerous words, in response to those who tried to talk down flattening yield curve and the link to recession. So, to Powell, it’s this time the same? Or is it different?

European Union and Japan signed an unprecedented free trade agreement in Tokyo today. The signing was delayed from last Wednesday, as Japan Prime Minister Shinzo Abe needed to give more attention to the flood in southwester Japan. It’s nevertheless a huge achievement in real terms by the two power houses after four years of negotiations. To name a few of the key points, it’s estimated that Japan GDP will be boosted by 1% with around 290k jobs created. The 10% import duty on Japan car will be dropped. And, the majority of the EUR 1B duties by European exporters will also be removed.

Abe said today that “while protectionism is spreading in the world, Japan and the European Union will take the lead as flag bearers for free trade.” European Council President Donald Tusk said “we are sending a clear message that we stand together against protectionism.”

Sterling’s initial reaction to today’s job data is rather muted. But markets seemed to make up their mind in delayed selloff. UK jobless claims rose 7.8k in June, above expectation of 2.3k. Average weekly earnings including bonus rose 2.5% 3moy in May, slowed from 2.6% 3moy. Average weekly earnings excluding bonus rose 2.7% 3moy, slowed from 2.8% 3moy. Unemployment rate was unchanged at 4.2% in the 3 months to May, staying a the joint-lowest since 1975. Employment rate rose to record high at 75.7%. UK employment rates (aged 16 to 64 years), seasonally adjusted, January to March 1971 to March to May 2018.

RBA reiterates next move is more likely an increase

RBA minutes of July meeting cleared up some confusions in the market as it stated that “members continued to agree that the next move in the cash rate would more likely be an increase than a decrease.” Still, as the progress of wage growth and inflation will “likely to be gradual, “there was no strong case for a near-term adjustment in monetary policy.” Instead, “the Board assessed that it would be appropriate to hold the cash rate steady and for the Bank to be a source of stability and confidence while this progress unfolds.” Overall, the minutes reaffirmed the tightening bias of the central bank, but the rate hike will only happen at least deep into mid-2019.

On the economy, RBA noted that recent data has been consistent with the central forecast of GDP growth at a bit above 3% over 2018 and 2019. Non-mining business investments had “contributed significantly” to growth in Q1. Public infrastructure investment and business conditions “remained positive”. But consumption “remained a source of uncertainty”. Labor market outlook remain positive for solid growth ahead, with “vacancy rate” risen to historical high. And the conditions will lead to gradual decline in unemployment rate and push up wages.