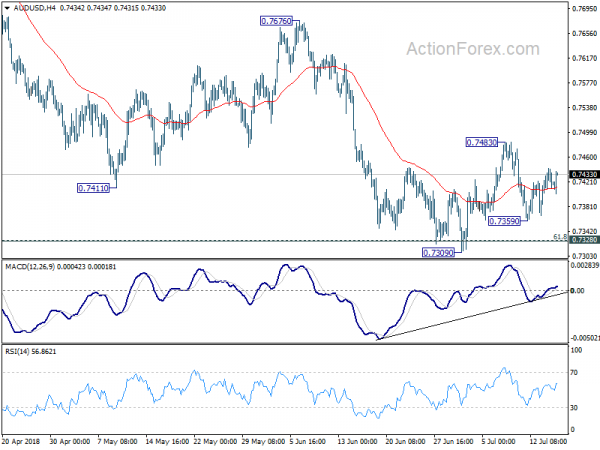 Commodity currencies trade generally higher today. New Zealand Dollar leads the way following improvement in RBNZ’s own preferred core inflation measures. Australian Dollar is also firm after RBA reaffirmed that the next move is likely a hike rather than a cut. Yen continues to trade as the weakest one even though stocks are turning mixed. Dollar follows as the second weakest as recent consolidation continues.

Technically, while Dollar is broadly weak, it’s staying in familiar range against Euro, Sterling, Aussie, Canadian and Yen. It’s just in consolidation mode. Yen is also seen losing downside momentum against Euro and Sterling. The Pound will be a focus today with job data featured. 0.8808 in EUR/GBP is a level to watch.

RBA reiterates next move is more likely an increase

RBA minutes of July meeting cleared up some confusions in the market as it stated that “members continued to agree that the next move in the cash rate would more likely be an increase than a decrease.” Still, as the progress of wage growth and inflation will “likely to be gradual, “there was no strong case for a near-term adjustment in monetary policy.” Instead, “the Board assessed that it would be appropriate to hold the cash rate steady and for the Bank to be a source of stability and confidence while this progress unfolds.” Overall, the minutes reaffirmed the tightening bias of the central bank, but the rate hike will only happen at least deep into mid-2019.

On the economy, RBA noted that recent data has been consistent with the central forecast of GDP growth at a bit above 3% over 2018 and 2019. Non-mining business investments had “contributed significantly” to growth in Q1. Public infrastructure investment and business conditions “remained positive”. But consumption “remained a source of uncertainty”. Labor market outlook remain positive for solid growth ahead, with “vacancy rate” risen to historical high. And the conditions will lead to gradual decline in unemployment rate and push up wages.

Minneapolis Fed Kashkari: ‘This time is different’ are the four most dangerous words

Minneapolis Fed President Neel Kashkari warned of the recession signal from flattening yield curve in a paper. Over the past 2.5 years, the difference between 10 year yield and 2 year yield has dropped 134bps to 25bps today, a 10-year low. He warned that “if the Fed continues raising rates, we risk not only inverting the yield curve, but also moving to a contractionary policy stance and putting the brakes on the economy, which the markets are indicating is at this point unnecessary.”

And he added that “this time is different” are the “four most dangerous words in economics”. And such declaration should be a “warning that history might be about to repeat itself.

UK Prime Minister Theresa May narrowly avoided defeat yesterday on the Brexit Customs Bill in the Commons after conceding to four amendments of the Brexiteers. But the slim margin in vote showed once again the deep divisions between pro-EU Tories and Brexiteers that could heavily undermine May’s position in upcoming negotiations.

Debates will continue today with the Trade Bill going to the Commons. The bill allows the UK government to build new trade relationships with other countries after Brexit. Some pro-EU MPs who support staying in the EU customs union are pushing for some changes in wordings.

IMF: US initiated trade actions as biggest threat, could lower global growth by 0.5% by 2020

IMF released the July update of the World Economic Outlook. Chief Economist Maury Obstfeld said in the the group continued to project global growth of around 3.9% for 2018 and 2019. But “risk of worse outcomes has increased, even for the near term.” In particular, he noted that “risk that current trade tensions escalate further—with adverse effects on confidence, asset prices, and investment—is the greatest near-term threat to global growth.”

He added that the US has ” initiated trade actions affecting a broad group of countries” and “faces retaliation or retaliatory threats from China, the European Union, its NAFTA partners, and Japan, among others.” Based on their modeling, Obstfeld said the trade policy threats could lower global output by around 0.5% by 2020. The US is “especially” vulnerable as it’s the “focus of global retaliation”.

UK employment data will be the main focus today. Canada will release manufacturing sales. US will release industrial production and NAHB housing index.