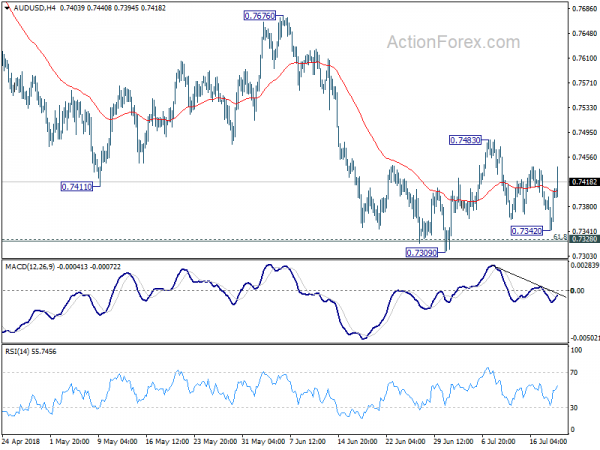 Australian Dollar jumps broadly today after much stronger than expected job data. But upside against Dollar is capped so far. After all, RBA is clear that it’s next move is likely a hike, yet there is no strong case for a near term movement. In rather directionless trading, Yen and Euro follows as the second strongest for today. Meanwhile, New Zealand Dollar is paring inflation data triggered gains and trades broadly lower, followed by Canadian Dollar. Over the week, Sterling remains the weakest one after selloff on Brexit worries and weaker than expected inflation reading. Focus will turn to today’s UK retail sales.

Technically, EUR/AUD’s strong break of 1.5696 minor support could be a sign of near term reverse that’s worth some attention. Dollar’s rally attempt yesterday somewhat failed as there was no follow through buying. USD/CAD’s break of 1.3126 minor resistance originally looked promising but it quickly reversed after hitting 1.3258. More corrective trading is likely in the greenback in near term. Main focus will be on how deep Sterling would fall to.

Australian Dollar jumps as employment data strong on all front

Unemployment rate remained unchanged at 5.4%. But without rounding, it’s actually the at its lowest since November 2012. Labor force participation rate rose 0.2% to 65.7%. Employment to population ratio also rose 0.2% to 62.1%.

Total exports logged a 19th straight month of growth. Rising trade tension with the US is not having much realized impact so far. Exports to China rose 11.1% yoy, to EU rose 9.3% yoy. Meanwhile, exports to US dropped -0.9% yoy.

Japan is still facing impacts from US steel and aluminum tariffs and threats on auto tariffs. The the blockbuster trade deal with EU just signed earlier this week should provide enough optimism to offset those threats.

Overnight, Fed Chair Jerome Powell’s second day of Congressional Testimony, at the House Financial Services Committee, contained no surprise as expected. On inflation, He said that Fed is “just about reached a symmetric 2 percent objective”. And, “from this point forward the risks are roughly balanced” even though he’s still “slightly more worried about lower inflation.” On employment, he said that the US is “close to full employment” but “maybe not quite there yet”. And he added “we need more people who are going to fill these jobs that are going to be coming open.”

Powell also refrained from commenting on the administration’s trade policy directly. But he still noted that “the bottom line is, a more protectionist economy is an economy that’s less competitive, it’s less productive.” And he warned that “you want to be careful to walk along this path because it may not be so easy to get off it,”

European Commissioner for Economic and Financial Affairs Pierre Moscovici warned in a newspaper interview that trade tension between the US and EU would hit the financial markets. He said “an escalation – no matter from which side – would have serious consequences for the economy, including for the financial markets, which would hurt all sides.”

He urged “that’s why we need a gateway to get out of this spiral that ultimately damages the global economy and pulls everyone down with it.”

Switzerland’s Finance Minister Ueli Maurer said yesterday that the Swiss Franc is still overvalued relative to Euro. He noted that “we like more 1.20 but at the moment we have 1.16”. Nonetheless, “we can live with this, I think.”

Maurer sounds he’s still unhappy with the huge balance sheet of SNB. He noted that “of course with all this intervention, we have a big, big balance sheet, but that’s a result of the policy of the last year and the pressing of the Swiss franc and the weakness of the euro.” But overall, Maurer said he believed the central bank and it had “made good policy”.