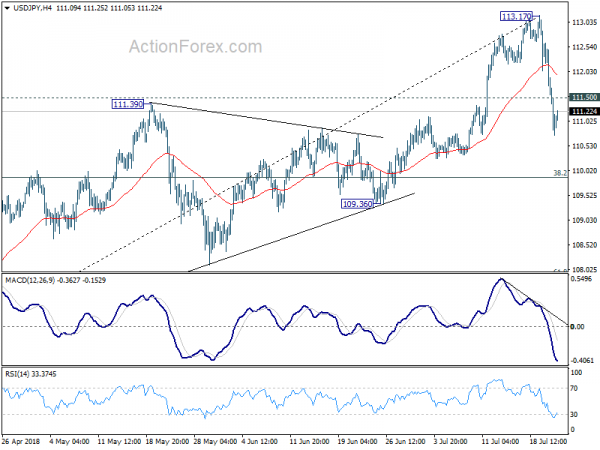 Yen is paring some gain in early US session but remains the strongest one for today, followed by Swiss Franc. Meanwhile, Australian Dollar overtakes Dollar as the weakest one. Euro follows as the second weakest as pressured in crosses. Dollar is trying to recover against other but there is no sustainable buying seen yet. The economic calendar is rather light in the US session. Hence, there shouldn’t be much inspiration from data. Main focus will be on BoE MPC member Ben Broadbent’s comments and markets will be keen to know his view on an August hike. Meanwhile, attention will also be on whether Yen could extend the sharp gains in the past two days.

In other markets, European indices are trading generally lower at the time of writing but loss is limited. FTSE is down -0.16%, DAX down -0.20%. CAC is the biggest sufferer and is down -0.51%. Nikkei closed down sharply by -1.33% earlier today but could be trading to draw support from 55 day EMA. Meanwhile, as Chinese Yuan stabilized after suspected intervention, Chinese stock extended recent rebound. Gold edged higher to 1235 earlier today but struggles to find follow through buying above 1230. WTI crude oil is trading above 69 for the momentum but hasn’t made up its mind to get through 70 handle.

EU Schinas: There are no offers when Juncker visits US

European Commission spokesman Margaritis Schinas said in a news conference today that President Jean-Claude Juncker will not bring a trade offer to the US when he visits Washington on July 25. Schinas said “I do not wish to enter into a discussion about mandates, offers because there are no offers. This is a discussion, it is a dialogue and it is an opportunity to talk and to stay engaged in dialogue.”

This is an echo of the comments by EU Trade Commissioner Cecilia Malmstrom last week. She said that the visit was to “try to establish a good relations, try to see how we can de-escalate the situation, avoiding it going further and see if there is a forum where we can discuss these issues.” She added that “we don’t go there to negotiate anything.”

Bundesbank said in the latest monthly report released today that the German economy is regaining some momentum currently. It noted that “the economy has likely showed better momentum in the spring than at the start of the year.” Nonetheless ” it is unlikely that the high growth rates of the past year will be repeated, manufacturing was once again the key economic driving force.”

China Foreign Ministry spokesman Geng Shuang said in a regular press briefing today that “China does not intend to stimulate exports through the currency competitive devaluation” and added that’s China’s consistent position. He went further to emphasize that the “RMB exchange rate is mainly determined by the market supply and demand.” And for now, “China’s economic fundamentals continue to improve, providing strong support for the RMB exchange rate to remain basically stable.”

10 year yield in Japan jumped as much as six basis points to 0.090%, hitting the highest level since February. It’s also the largest daily rally in nearly two years. The sharp movement prompted an unscheduled operation by BoJ to buy 10 year JGB at a yield of 0.11%. That’s the same level as at last intervention but no bid was tendered.

The movements were based on reports that BoJ is discussing changes to its monetary policy, including the interest-rate targets and stocks-buying techniques. The objective is to make the stimulus program more sustainable. Currently, under the Yield Curve Control framework, BoJ is buying JGBs to keep 10 year yield at around 0%. And the central bank could allow 10 year yield to rise higher to 0.10% to give more flexibility to monetary policy.

G20 pledged to strengthen contribution of trade to the economies

G20 finance ministers and central bankers stepped up their language regarding trade tension in the communique after the meeting in Argentina. The communique noted that “risks over the short and medium term have increased”. And the risks include “financial vulnerabilities, heightened trade and geopolitical tensions, global imbalances, inequality and structurally weak growth, particularly in some advanced economies.” The group pledged to “continue to monitor risks, take action to mitigate them and respond if they materialise.”

The communique also noted that “international trade and investment are important engines of growth, productivity, innovation, job creation and development.” The group reaffirmed the conclusions on trade at the Hamburg Summit and “recognise the need to step up dialogue and actions to mitigate risks and enhance confidence”. And “we are working to strengthen the contribution of trade to our economies.”

USD/JPY recovers mildly after hitting as long as 110.74. It then recovers mildly on oversold condition in 4 hour RSI. But as upside is limited below 111.50 minor resistance. intraday bias remains on the downside for 55 day EMA (now at 110.45) and below. However, as fall from 113.17 is seen as a correction to rise from 104.62, downside, should be contained by 38.2% retracement of 104.62 to 113.17 at 109.90 to bring rebound. On the upside, above 111.50 minor resistance will turn intraday bias neutral first. But break of 113.17 is needed to confirm up trend resumption. Otherwise, more consolidation would be seen with risk of another fall.