Daily Report: Euro and Dollar Mixed ahead of the Juncker-Trump Meeting 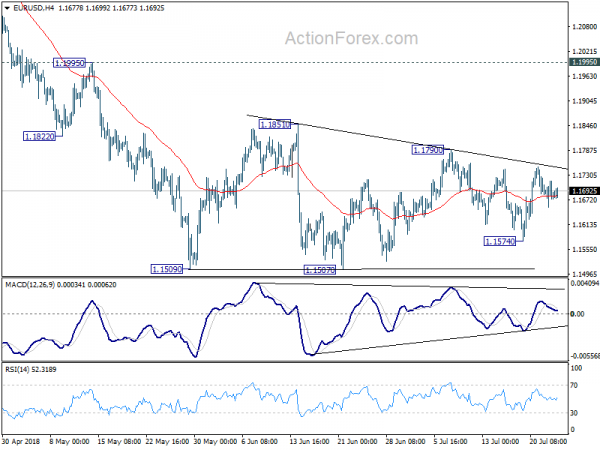 Sterling appears to be lifted by the news that UK Prime Minister Theresa May has taken over Brexit negotiation. That raised the chance of some speedier conclusions as well as more unified position, as least in front of the EU. The pound is trading as the strongest one for today and the week. On the other hand, Australian Dollar is trading as the weakest one for today after a slightly miss in CPI. It’s not a disastrous piece of data but it neither give RBA any reason to pull ahead a rate hike.

Euro and Dollar are mixed as eyes are on the meeting between European Commission European Commission President Jean-Claude Juncker’s meeting with Trump on trade. It’s a highly anticipated event, yet the expectations are low. Trump continued to play victim with he tweets and said the Americans are the “piggy bank” that’s being robbed by others. And he bluffed the EU to drop all tariffs, barriers and subsidies but said “they won’t”. That’s not seen as an attitude for negotiation with sincerity.

On the other hand, it’s clear that Juncker and European Union trade commissioner Cecilia Malmstrom will not bring another offer to the US. It’s just a meeting to “de-escalate the present situation and prevent it from worsening”. Comments from EU Oettinger also suggested that there is no common ground for any breakthrough. So, let’s see how it goes.

EU Oettinger to Trump: Drop your punitive tariffs, and we can talk about all tariff reductions

European Union Budget Commissioner Guenther Oettinger commented regarding EU-US trade relationship, ahead of Juncker’s meeting with Trump. Oettinger said “firstly, our common line is that we expect the existing punitive tariffs to be lifted”, referring the section 232 national security steel and aluminum tariffs. And, “then we are ready to discuss a reduction and restructuring of all tariffs in all sectors.”

He added that “in this way, we want to avoid a further escalation of the trade conflict, and to avoid a trade war/” And, “one could try to untangle the existing tariffs and then … reduce tariffs for various goods and services.” He added that ” would be a negotiation that would be possible in half a year, and which we could start with the U.S. in the autumn.”

Overnight, Trump administration announced to offer up to USD 12B in aid to farmers that are affected by the the US trade war with other countries, notably China. The program included a mix of measures overseen by the USDA, including director payments to soybean producers, distribution assistance and international marketing. Trump said in the farmers will be the “biggest beneficiary” in what he’s doing on trade and ” watch, we are opening up markets, you watch what is going to happen, just be a little patient.”

The program is not generally welcomed by the industry though. Zippy Duvall, president of the American Farm Bureau Federation, the largest American farmer group said, “we cannot overstate the dire consequences that farmers and ranchers are facing in relation to lost export markets … and we will continue to push for a swift and sure end to the trade war.”

American Soybean Association said in a statement that “the announced plan provides only short-term assistance … ASA continues to call for a longer-term strategy to alleviate mounting soybean surpluses and continued low prices, including a plan to remove the harmful tariffs.”

Blake Hurst, a corn and soybean farmer and president of the Missouri Farm Bureau said “the payments will be helpful to farmers facing overdue loans and angry bankers, but are completely insufficient if they mean that tariffs and the trade war will last for the foreseeable future”. “They are a very temporary bandage to a self-inflicted wound.”

IMF warns in its latest 2018 External Sector Report (ESR) that “excess imbalances are increasingly concentrated in advanced economies” that “both deficits and surpluses—pose risks for individual countries, and for the global economy.” Global current account surpluses and deficits “remained relatively unchanged over the past five years” at around 3.25% of global GDP. And 40-50% is concentrated in advanced economies.

Higher-than-desirable current account balances prevail in northern Europe—in countries such as Germany, the Netherlands, and Sweden—as well as in parts of Asia—in economies like China, Korea, and Singapore. Lower-than-desirable balances remain largely concentrated in the United States and the United Kingdom.

IMF also pointed out that “persistence of global imbalances and mounting perceptions of an uneven playing field for trade are fueling protectionist sentiment.” And “these impulses are misguided. It warned that “escalation of protectionist policies would mainly hurt domestic and global growth, without much of an effect on current account imbalances, as this year’s report also finds.”

It urged countries to tackle imbalances together. In particular:

UK PM May takes over Brexit negotiations from now on

Both Australian Dollar and New Zealand Dollar are trading lower today after release of economic data.

Australia CPI rose 0.4% qoq, 2.1% yoy in Q2. The annual rate accelerated from Q1’s 1.9% yoy but missed expectation of 2.2% yoy. RBA trimmed mean CPI was unchanged at 1.9%, inline with expectation. RBA weighted median CPI slowed to 1.9% yoy, down from 2.0% yoy, matched expectation. RBA is very clear with its stance that there is no compelling reason to raise interest rate in near term. And the inflation data certainly won’t alter that position.

EUR/USD continues to be bounded in consolidation from 1.1509 and intraday bias stays neutral. Stronger recovery cannot be ruled out as the consolidation extends. But in that case, upside should be limited by 1.1851 resistance to bring fall resumption eventually. On the downside , firm break of 1.1507 will resume larger down trend through 50% retracement of 1.0339 to 1.2555 at 1.1447.