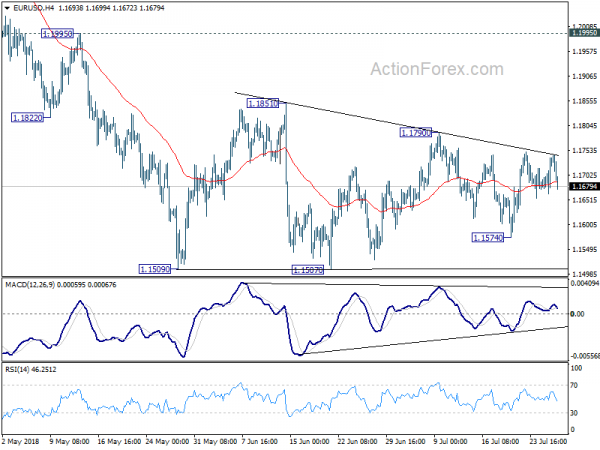 Euro weakens slightly against Dollar after ECB left monetary policy unchanged as widely expected. President Mario Draghi delivered a balanced yet Uninspiring press conference. Fresh buying is seen in Dollar in early US session and the greenback has overtaken Yen as the strongest major currency for today. But it’s to early to call for completion of recent correction in Dollar. For now, Australian Dollar and New Zealand Dollar are trading as the weakest ones.

In other markets, DOW extends this week’s rally in early trading, up over 100pts, on optimism on EU-US trade relationship. German DAX outperforms other European indices on such optimism too. The receding threat of auto tariffs is clearly a blessing to German investors. DAX is trading up 1.47% at the time of writing, CAC up 0.45%. FTSE, on the other hand, is down -0.18%. However, Risk aversion was dominant in Asia though. China Shanghai SSE closed down -0.74%, Hong Kong HSI down -0.48%. Nikkei also lost -0.12%.

ECB Draghi reiterated the policy path, rates to stay at current level at least through 2019 summer

ECB left interest rates unchanged as widely expected. Main refinancing rate is held at 0.00%, marginal lending facility rate at 0.25%, deposit facility rate at -0.40%. In the introductory statement to the press conference, ECB President Mario Draghi reiterated that the asset purchase target will be lowered to EUR 10B per month after September, subject to data confirmation to economic forecasts. The program will end after December. Interest rates are expected state at present levels through the summer of 2019.

In the Q&A section, Draghi acknowledged that the EU-US trade talks this week was a “good sign” but it’s too early to assess the content of the agreement. Regarding question on Trump’s attack on Eurozone’s currency manipulation, Draghi said it’s known that exchange rate isn’t a policy target of the ECB.

Finance Minister Bruno Le Maire urged that “each side, the Europeans and the Americans, must find something in these discussions”, and, “any trade deal must be based on reciprocity”. He also emphasized that agriculture must be excluded from the trade negotiations. To him, Europe could not ease its food safety and environmental norms. Also, he seems to prefer more focus in the negotiation and said “we don’t want to enter into a negotiation a wide-ranging deal.”

German Foreign Minister Heiko Maas welcomed the results even though “this is not yet the result we are aiming for”. He acknowledged that “it has made a positive result in the whole discussion…on free trade or protectionism more likely than before.” Economy Minister Peter Altmaier also expressed his optimism that ” we can get a good result in the coming weeks and months.”

Department for International Trade said in statement that “we welcome the agreement by the U.S. and the EU to work together to reduce barriers to trade and to further increase trade and investment.” And, “we look forward to progress towards the removal of steel and aluminum tariffs and de-escalation of the tit-for-tat action that could harm businesses and jobs on both sides of the Atlantic.”

Yesterday, European Commission President Jean-Claude Juncker’s meeting with US President Donald Trump seemed to have achieved a breakthrough that could avoid a full-blown EU-US trade war. A rather positive joint statement was issued pledging to work towards “zero tariffs, zero non-tariff barriers, and zero subsidies on non-auto industrial goods”. This is taken well generally by both sides.

While the auto tariffs were not mentioned in the joint statement, Juncker later said that the Trump made a “major concession” for holding off on further tariffs, including autos, as long as the negotiations continue. Juncker said he expected Trump to follow through on it. Also, he noted that Trump agreed to reassess the measures in the steel and aluminum sector.

Chinese President Xi Jinping called for joint effort in fighting protectionism at a BRICS summit in South Africa today. He told BRICS leaders that “we must work together … to safeguard the rule-based multilateral trading regime; promote trade and investment, globalization and facilitation; and reject protectionism outright.”

But Xi should be reminded that EU and US have agreed on a joint position. That is, both EU and US agreed to join forces against “unfair global trade practices”. And specifically, they the practices include “intellectual property theft, forced technology transfer, industrial subsidies, distortions created by state owned enterprises, and overcapacity.” They clearly target China and it’s time for Xi to step up reforms.

EUR/USD dips mildly early US session but stays inside range above 1.1507/9. Intraday bias remains neutral for the moment. Stronger recovery cannot be ruled out as the consolidation from 1.1509 extends. But in that case, upside should be limited by 1.1851 resistance to bring fall resumption eventually. On the downside , firm break of 1.1507 will resume larger down trend through 50% retracement of 1.0339 to 1.2555 at 1.1447.