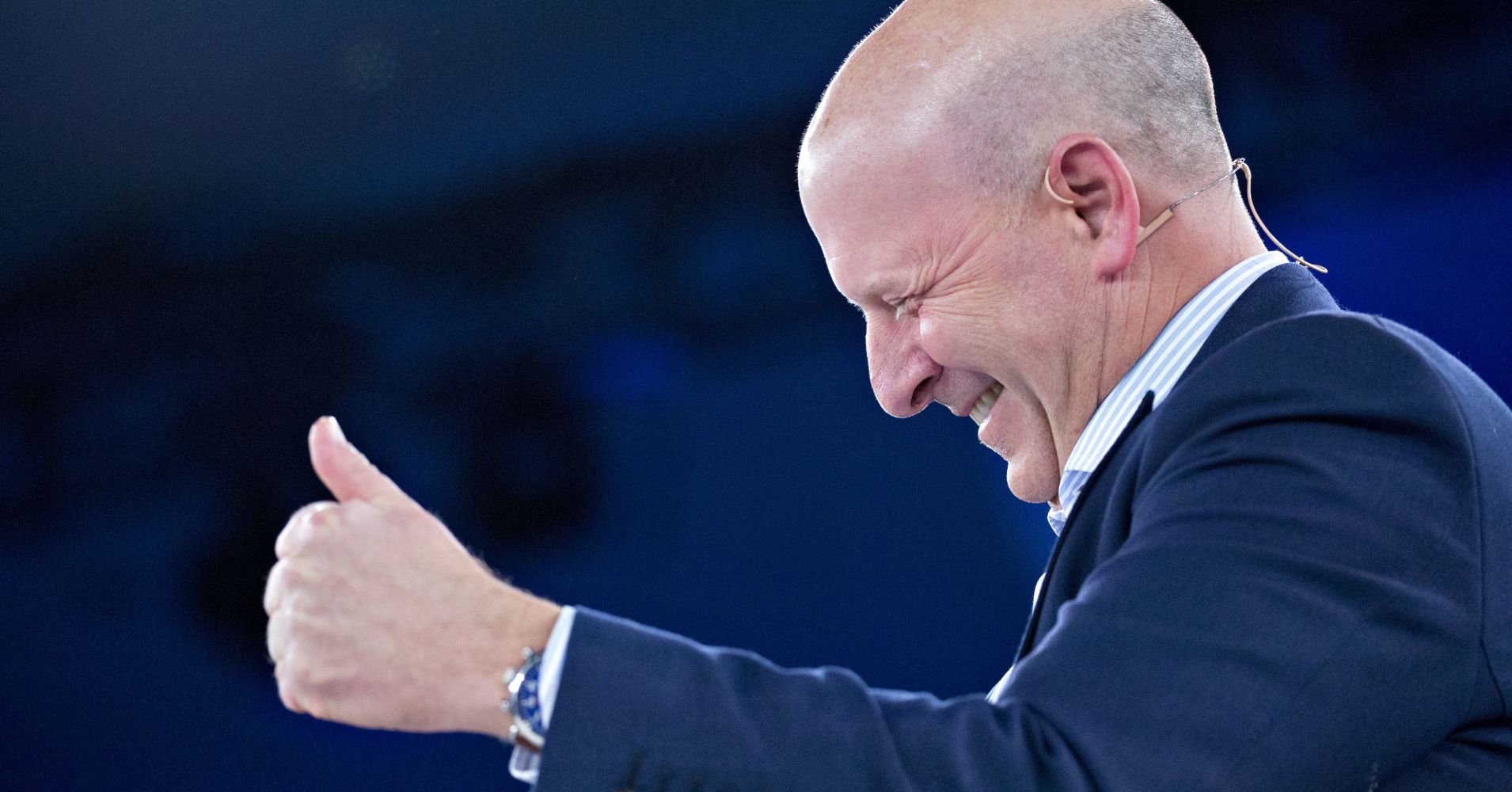 Goldman Sachs’ next chief executive officer and chairman, David Solomon, often talks about his personal interests, including an unusual side gig as a dance club disc jockey. Now, he wants his leaders to open up.

Solomon, 56, was asked about his hobby at a recent conference for clients and executives, according to Brian Levine, a Goldman partner and co-head of global equities trading. Last week, Solomon was formally named successor to longtime CEO Lloyd Blankfein, taking over on Oct. 1.

“David is very aware that we’ve got to be more open,” Levine said in an interview. To help foster connections with employees and clients, Solomon said that “leaders today have to be more vulnerable, they have to put themselves out there a lot more than they probably are comfortable doing,” said Levine.

Solomon’s push for openness embodies a shift that is occurring throughout the 149-year-old investment bank. Housed in an imposing steel-and-glass tower on Manhattan’s West Side whose unmarked entrance was recently watched by four hulking security guards, the bank emerged from the financial crisis with a reputation as an insular trading juggernaut. Before regulations restricted the practice, Goldman was perhaps Wall Street’s most successful proprietary trading house — but the fact that it was making bets with its own money left some clients wondering if the firm always had their best interests at heart.

To succeed in a world where volatile trading revenue is seen as less desirable than steady fee-generating businesses, Solomon will have to transform Goldman into a friendlier financial firm that touches — and wins the trust — of many more ordinary consumers and corporations.

The pivot is a more delicate change than one undergone by other institutions under more immediate duress, from Wells Fargo to Facebook to Uber, which have been forced to adapt in the face of crippling scandals. Instead, Goldman and its new leader need to prove it can develop nascent sources of revenue and shed more of its legacy as a private partnership to attract customers and employees. Goldman shares have fallen about 7 percent this year through Thursday, the worst performance of the six biggest U.S. banks.

Blankfein has acknowledged that the company’s secrecy — it rarely had advertisements and didn’t even put its name on its headquarters — helped create a void that outsiders filled with unflattering narratives. After making lucrative bets against the U.S. housing market a decade ago, it was labeled a “vampire squid” by Rolling Stone magazine. The company’s track record of producing government officials, including two Treasury secretaries in the past decade, has helped fuel conspiracy theories about the bank’s connections.

“In general we never publicized what we did anywhere,” Blankfein said in a 2016 interview. “After the crisis, we realized that we didn’t communicate enough with the public to let them know who we were and what our contribution was to society.”

Solomon, who joined Goldman in 1999, was one of the architects of a plan unveiled in September to boost revenue by $5 billion by broadening its client base beyond hedge funds and asset managers, finding growth in smaller markets and pushing into retail products.

In April, the firm acquired a personal finance start-up called Clarity Money. The company’s app, which will serve as the gateway to all of Goldman’s digital finance products, has positioned itself as an unbiased consumer advocate. It helps its 1 million users save money by securing discounts on services or cancelling unnecessary subscriptions. Under the Marcus brand, Goldman currently offers deposits and personal loans but will eventually offer a full suite of products, from wealth management to mortgages and life insurance.

“We’ve got your back,” are the words sprawled on a 40-foot column advertising Clarity Money in the bank’s headquarters.

Goldman began its first advertising campaign aimed at consumers in 2016, an effort they ramped up this year, along with an aggressive direct-mail effort. And the bank now regularly posts videos and podcasts of executive interviews and tweets photos showing glimpses of life at the firm, including a shot Thursday commemorating Shark Week.

The cultural shift includes more transparency on financial targets. Analysts have voiced frustration with the lack of information Goldman offers on its various businesses. Under Solomon, the bank is considering hosting its first-ever Investor Day next year, according to people with knowledge of the plans. At similar events held by competitors, firms typically disclose multiyear financial targets, giving analysts the chance to hold management accountable.

Solomon is attempting to modernize the firm in other ways. Days after Solomon’s promotion was announced, the bank said three women were joining its management committee, nearly doubling female representation in the powerful group, according to a memo.

“People want to work at an organization that’s diverse, that’s open, that has all different kinds of people, that is very accepting,” Solomon said in an October podcast.

More broadly, the firm has opened its executive ranks to outsiders at a pace not seen since the New York-based bank went public in 1999. It hired 15 executives at the most senior rank of partner in the past year, a trend that will continue, according to The Wall Street Journal.

Levine, who joined Goldman in 1994 and has steadily climbed the ranks of the firm’s equities division, said Solomon has helped managers begin to loosen a historically buttoned-up culture. “If you’re a leader it’s easy to be authoritarian and to tell everyone, ‘This is the way it is,'” Levine said. “It’s a lot harder to share information, get feedback and have an open dialogue.”

Levine, 47, said he posts “fairly aggressively” to internal social media-like platforms to help foster an atmosphere that’s more welcoming to millennial employees, who are known for constant sharing of their personal lives. He also organizes an annual fundraiser for a Harlem nonprofit that allows hundreds of Goldman employees to compete in a whiffle ball tournament.

Events like that create a “social environment, it enables people to blend their outside life with their inside life,” Levine said. “You see in surveys of millennials, they say that’s what they want at work.”

The news coverage of Solomon’s hobby caught him off guard when headlines emerged last year, he said, according to a transcript of a May conference. But Solomon eventually decided that sharing more of his personal life with subordinates makes him more approachable.

In the 2017 podcast, Solomon said he was a music fan for decades, owning more than 1,000 vinyl records in college. When digital streaming allowed broader exposure to different genres, Solomon realized he enjoyed electronic dance music, or EDM.

Solomon has since embraced the spotlight, releasing an EDM single called “Don’t Stop” in June under his stage name D-Sol. He has 465,337 monthly listeners on Spotify. He’s also been spotted performing before crowds in venues from Brooklyn’s Williamsburg to the Hamptons, according to news reports.

“It’s something I’m really passionate about,” Solomon said in the podcast. “If you can’t find a way to have passions and pursue those passions and mix them into your professional life and your personal life, it’s just harder to have the energy to keep on doing this.”

Solomon may be uniquely suited for the new Goldman. Where Blankfein is known for a quick wit, Solomon is more likely to come off as disarmingly earnest. The day after a ceremony where he was formally introduced by Blankfein as his successor, Solomon spoke to a roomful of the bank’s interns, expressing wonder that he would soon be running the place.

“When Lloyd called me up at the stage, I was pretty emotional about it, it really affected me,” Solomon said. “I was shaking.”