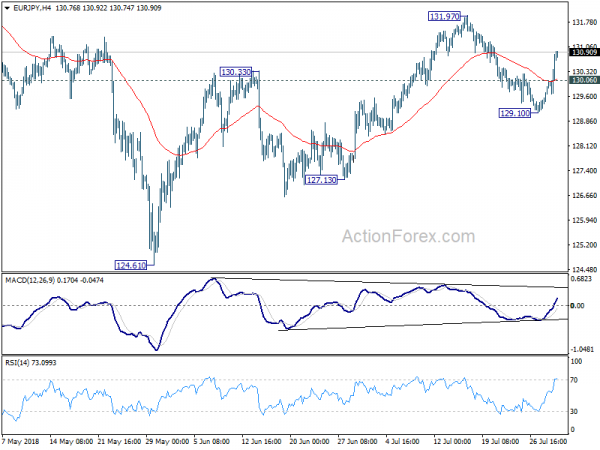 Euro emerges as a strong one today after a number of volatility triggering events. Upside surprise in Eurozone inflation is a key factor lifting the common currency higher. Australian Dollar is also strong, competing with Euro for the biggest gainer today. Meanwhile, stronger than expected GDP data lifted Canadian Dollar, which reversed earlier selloff. On the other hand, Yen is clearly the weakest after BoJ Governor Haruhiko Kuroda made himself very clear that there will not be early stimulus exit. Dollar is also weak, except versus Yen and Kiwi after lackluster data from the US.

In other markets, Japanese 10 year JGB yield was knocked down to close at 0.048, after hitting a day high at 0.115. The theme of JGB yield pulling Yen higher should be over now. US 10 year yield also suffers mildly and is down at 2.95. Asian stocks were mixed today, with Nikkei reversing earlier losses to close up 0.04%. China Shanghai SSE closed up 0.26%. Singapore Strait Times closed up 0.38%. But Hong Kong HSI closed down -0.52%. FTSE is up 0.71% at the time of writing but DAX is down -0.23%. CAC is up 0.19%. Tech stock is a major focus in US session after the steep selloff in NASDAQ in the past two days.

Technically, both EUR/JPY and GBP/JPY should have reversed recent decline already. With less confidence, USD/JPY is possibly bottomed out too. While Euro is strong, EUR/USD is held well below 1.1790 near term resistance. EUR/GBP is held below 0.8957 resistance. Thus, more is needed for Euro to convince us of its momentum. USD/CAD’s focus is back at 1.2993. But for now, recent fall in USD/CAD from 1.3385 is seen as a correction. We’d reckon limited downside potential even if there is a next fall.

Eurozone all-item CPI accelerated to 2.1% in July, up from 2.1% yoy and beat expectation of 2.0% yoy. That’s also the highest level since 2012. Core CPI also accelerated to 1.1%, up from 0.9% yoy and beat expectation of 1.0% yoy. ECB is clear with its path for stopping the asset purchase program. And it’s clear with the forward guidance of keeping interest rates unchanged through summer of 2019. The language, though, is intentionally kept ambiguous as ECB wanted to strike the balance between precision and flexibility. While a month of inflation data won’t trigger ECB to pull ahead the first hike, it certainly reduces the chance of delaying it.

Initial post BoJ weakness in Yen was limited today. But free selling was prompted after BoJ Governor Haruhiko Kuroda delivered very clear message at the press conference. A key to note is that under the strengthened framework, BoJ will now allow yields to move between -0.1% and +0.1%. And Kuroda emphasized that “we do not intend this change to lead to a rise in interest rate levels.” He added that the 0.2% range will “improve functions in the government bond market, which had been deteriorating” and “help make our easy-policy more sustainable”.

On forward guidance, Kuroda said it’s for strengthening the “commitment to achieve our 2 percent inflation target”. And, “we’ve adopted this to ensure market trust in our policy as we will be maintaining our massive stimulus longer than initially expected.” Kuroda pointed to “some speculation” that BoJ will seek an “early exit”. And he hoped this can “dispel such speculation”.

Additionally, he also admitted that it takes “longer than expected” for inflation to pick up. Hence, “achievement of our target will be beyond our (three-year) forecast timeframe”. And he also emphasized that “Under our yield curve control (YCC), real interest rates will fall even if nominal rates are steady as long as inflation expectations heighten.” But there is no need for additional easing for now.

The official China PMI manufacturing dropped -0.3 to 51.2 in July, below expectation of 51.3. Official PMI services dropped -1.0 to 54.0, missed expectation of 55.0. Analyst Zhang Liqun noted in the release that despite the slight decline in the PMI index, “steady growth of the economy remained unchanged”. However, “short term downward pressure has emerged”.

Looking at the details, eight of the sub-indices declined in the month. They include production, new order, purchase volume, import, purchase price, ex-factory price, suppliers delivery, production and operation expectation, New export orders, was unchanged but in contraction region at 49.8. The data set is seen by some as the first sign of impact from increasing trade tension with the US.

New Zealand ANZ business confidence index dropped to -45 in July, down -5 pts. That’s the lowest level since May 2008. Own activity index dropped -5 pts to 4, lowest since May 2009. Sub-indicators were weak across the board, and retail is the least
confident sector.

ANZ noted in the release that “this economy feels increasingly late in the cycle”. While fiscal stimulus and strong terms of trade will support growth, “sustained low business confidence increases the risk that firms will delay investment and hiring decisions”. “The Road ahead is looking less assured, and risks of a stall have increased.

In the bigger picture, for now, medium outlook remains cautiously bullish. the three wave structure of the fall from 137.49 to 124.61 argues that it’s a correction. Also, 124.08 key resistance turned support was defended. Break of 133.47 resistance will affirm the bullish case that rise from 109.03 (2016 low) is still in progress for another high above 137.49. And this will remain the favored case as long as 127.13 support holds.