Yen Spikes Lower after BoJ, But No Follow Through Selling Yet 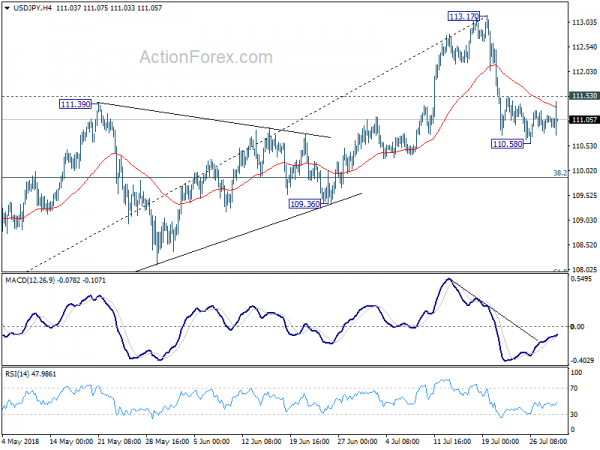 Yen spikes lower broadly after BoJ announced to strengthen the framework for continuous powerful easing. But at this point, there is no follow through selling seen yet. Instead, of raising the target on 10 year JGB yields, BoJ simply allow flexibility to move it in move directions of up and down. Also, it added forward guidance that interest rates will stay extremely low for an extended period of time. 10 year JGB yields drops sharply from day high at 0.115 and breaches 0.07. Nikkei, on the other hand, cheers the announcement and reversed earlier loss, up 0.13% at the time of writing.

Staying in the currency markets, while Yen is weak, Canadian Dollar is even worse today on report that Canada is rejected from the US-Mexico NAFTA talk in an unusual move. Australian Dollar is showing some strength. Euro and Swiss Franc follow as the second and third strongest. But the common currency will face the tests of Eurozone GDP and CPI in European session. Dollar is mixed for today as markets await a string of economic data from the US, including consumer confidence and PCE inflation.

Technically, while Yen spikes lower, USD/JPY is held below 111.53 minor resistance, and thus, maintains near term bearishness. GBP/JPY is also held below 146.51 minor resistance. EUR/JPY breaches equivalent resistance at 130.25 but lacks follow through buying so far. USD/CAD breaches 1.3092 but also lacks follow through buying. Overall, there is no “committed” direction in the markets yet.

Yen is sold off sharply after BoJ announced the “Strengthening the Framework for Continuous Powerful Monetary Easing“.

On Yield Curve Control framework BoJ voted 7-2 on the following decision. Firstly, short term interest rate target is held unchanged at -0.1%. Secondly, 10 year JGB yield target is maintained at around 0%. But, “yields may move upward and downward to some extent mainly depending on developments in economic activity and prices”. The annual pace of monetary expansion is kept at around JPY 80T. BoJ also noted that “in case of a rapid increase in the yields, the Bank will purchase JGBs promptly and appropriately”.

Y Harada and G Kataoka dissented the above decision. Harada said allowing long term yields to move upward and downward was to some extent “too ambiguous”. Kataoka continued his push to broaden the target to JGB of 10-years and longer.

BoJ also added forward guidance on interest rate. It said “the Bank intends to maintain the current extremely low levels of short- and long-term interest rates for an extended period of time, taking into account uncertainties regarding economic activity and prices including the effects of the consumption tax hike scheduled to take place in October 2019.”

BoJ: Growth to slow in 2019/20, inflation expectations lagging behind

In the latest Outlook for Economic Activity and Prices, BoJ said the economy is “likely to continue growing at a pace above its potential in fiscal 2018”. For fiscal 2019 through fiscal 2020, the expanding trend is expected to continue, “partly supported by external demand”, but pace will “decelerate” due to “cyclical slowdown in business fixed investment” and the impact of planned sales tax hike.

Year-on-year ex-food CPI stayed positive but continued to show “relatively weak developments”. And, rise in medium- to long-term inflation expectations has been “lagging behind”. BoJ noted that’s because “the mindset and behavior based on the assumption that wages and prices will not increase easily have been deeply entrenched”. But inflation is still expected to increase gradually towards 2% target, “although it will take more time than expected”.

Canadian Dollar drops sharply on a report by the National Post that it’s rejected from the senior level NAFTA talks between the US and Mexico, which will be held later this week. Quoting unnamed source, the report noted that the request by Canadian Foreign Affairs Minister Chrystia Freeland to join the meeting was ignore or spurned outright by US Trade Representative Robert Lighthizer. And Lighthizer is planning not to involve Canada unless the latter make some major concessions.

Separately, it’s reported that the US and Mexico will hold ministerial-level NAFTA trade talks on Thursday in Washington. According to a Mexican source quoted by Reuters, there will be “technical meetings probably until Wednesday and a ministerial meeting on Thursday.”

The official China PMI manufacturing dropped -0.3 to 51.2 in July, below expectation of 51.3. Official PMI services dropped -1.0 to 54.0, missed expectation of 55.0. Analyst Zhang Liqun noted in the release that despite the slight decline in the PMI index, “steady growth of the economy remained unchanged”. However, “short term downward pressure has emerged”.

Looking at the details, eight of the sub-indices declined in the month. They include production, new order, purchase volume, import, purchase price, ex-factory price, suppliers delivery, production and operation expectation, New export orders, was unchanged but in contraction region at 49.8. The data set is seen by some as the first sign of impact from increasing trade tension with the US.

New Zealand ANZ business confidence index dropped to -45 in July, down -5 pts. That’s the lowest level since May 2008. Own activity index dropped -5 pts to 4, lowest since May 2009. Sub-indicators were weak across the board, and retail is the least
confident sector.

ANZ noted in the release that “this economy feels increasingly late in the cycle”. While fiscal stimulus and strong terms of trade will support growth, “sustained low business confidence increases the risk that firms will delay investment and hiring decisions”. “The Road ahead is looking less assured, and risks of a stall have increased.