By one measure, stocks are as pricey as they were during the dotcom bubble: ‘Scariest chart in our database’ 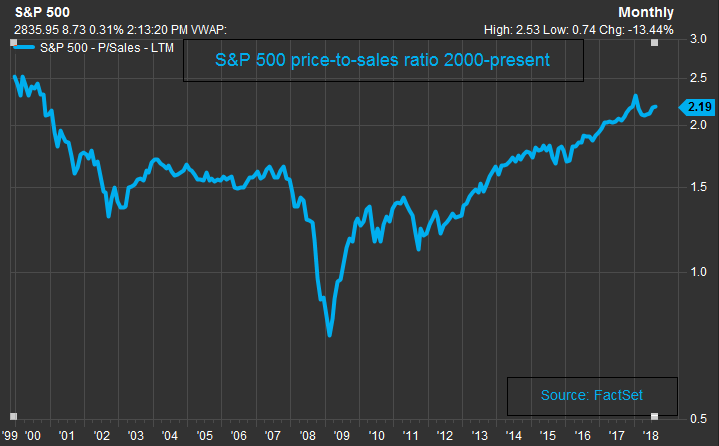 By one measure, stocks are as pricey as they were before the dotcom bubble burst, and that should give investors pause moving forward, according to Doug Ramsey of The Leuthold Group.

“For the last year, we have labeled the S&P 500 Price/Sales ratio—which has returned to its Y2K bubble levels—the ‘scariest chart in our database,'” Ramsey wrote. “Recall that the initial visit to present levels was followed by the S&P 500’s first-ever negative total return decade.”

The price-to-sales ratio is not the most popular valuation metric on Wall Street but it may be one that is least likely to be manipulated. Most professional investors look at the price-to-earnings ratio, which measures a company’s price against its profit. However, some experts argue earnings can be manipulated through different friendly accounting practices.

Equity valuations rose sharply during the dotcom bubble as investors poured money into several nonprofitable internet companies. Once the bubble burst, many of these companies folded and the stock market lost half of its value as all of them plummeted in value. This year, the S&P 500 is up more than 6 percent and reached an all-time high in late January.

But Ramsey said the overvaluation today may be worse than during the bubble, noting the median S&P 500 price-to-sales