Week Ahead – UK and Japan Next to Report GDP Figures; RBA and RBNZ Rate Decisions Eyed 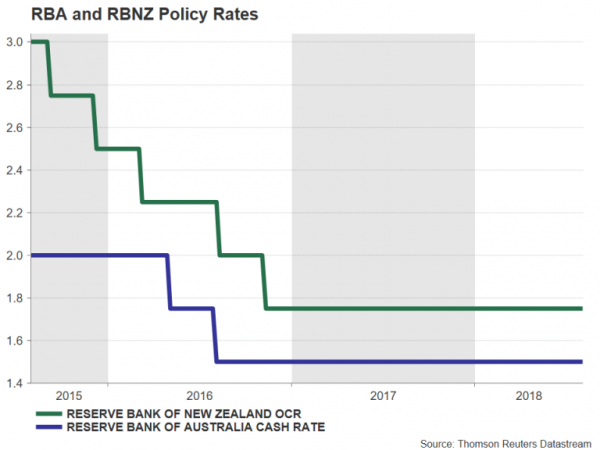 There will be a continuation of the central bank and Q2 GDP theme in the next seven days as interest rate decisions will be awaited out of Australia and New Zealand, while the United Kingdom and Japan will publish growth figures. Monthly data on trade balance and industrial output will also be in focus, along with Canadian employment and US inflation numbers.

It will be the turn of the Reserve Bank of Australia and the Reserve Bank of New Zealand to set monetary policy, following decisions from other major central banks in the past two weeks. The RBA will be the first to hold its monetary policy meeting on Tuesday, with no change in rates anticipated. Although recent data from Australia have been fairly strong, there’s been no change in market expectations of how soon the RBA will raise its cash rate. Investors are not presently fully pricing a rate increase until November 2019 and the RBA is not expected to shift from its neutral stance anytime soon as inflation only moved into the Bank’s target band of 2-3% in the second quarter and wage growth remains subdued.

While the RBA will probably maintain its rosy outlook for growth, this is unlikely to provide much support to the Australian dollar, which has been under pressure this week from intensifying Sino-US trade tensions. Nevertheless, aussie traders should be on the standby next week as, apart from the RBA announcement, the Governor Philip Lowe will be taking to the podium on Wednesday, while on Friday, the Bank will publish its quarterly outlook report. In terms of data, June housing finance numbers should be watched on Wednesday.

Across the Tasman Sea, the RBNZ decision on Thursday is not expected to generate much excitement either as it too is anticipated to keep rates unchanged. However, while both the RBA and RBNZ have been bound to a neutral mode since 2016, there’s been a bit of divergence recently, with the New Zealand economy showing some unexpected weakness. The RBNZ has even said the next move in rates could be down, though for now, the broad consensus for the next move is an increase. The kiwi could be headed back towards the two-year low of $0.6686 it hit in July if the Governor Adrian Orr maintains a somewhat downbeat view of the economy in his statement, and more importantly, if the Bank lowers its economic forecasts in its quarterly monetary policy statement due the same day.

China’s exports to slow in July

Exports from China had maintained strong growth in June, rising by 11.2% year-on-year. However, the figure was skewed as exporters were front-loading shipments before the $34 billion of US tariffs came into force in July. A mild slowdown is therefore expected in July to 10% when the trade numbers are released on Wednesday. A weaker reading could upset an already fragile Chinese equity market, as well as broader global risk sentiment, as it would suggest US tariffs are hurting demand for Chinese goods. Also out of China next week are the latest producer and consumer price indicators on Thursday.

Japan will have a relatively busy week with the spotlight being on the first reading of second quarter GDP growth due at the end of the week. Ahead of that though, household spending and earnings numbers will be looked at on Tuesday. Recent household spending figures have been dreadful, falling during every month of 2018 so far except in January. A turnaround of 1.7% month-on-month is expected in June, which would raise hopes that the pick-up in growth that is currently underway would be sustainable. Wage growth data due the same day could also send positive signals about the economy and the outlook for consumer spending if they maintain the recent uptrend in June. On Thursday, machinery orders for Jun