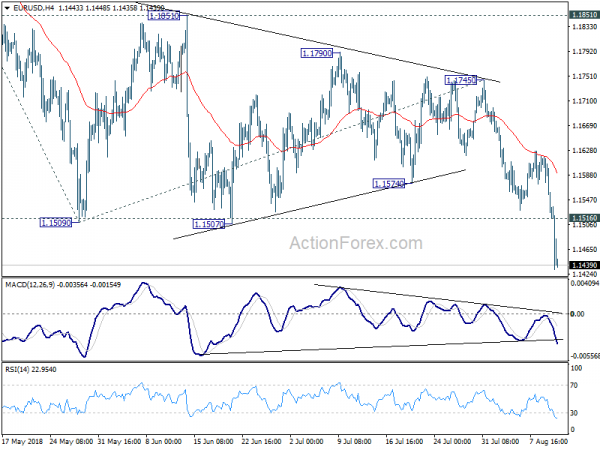 Dollar, Yen and Swiss Franc are trading as the strongest ones today as supported by solid safe haven flow. The free fall in Turkish Lira raised concerns of contagion to Eurozone financial system. Such worries sends the Euro broadly lower, even though Australian Dollar performs even worse. Crisis speech of Turkish President Erdogan doesn’t ease the worries a little bit. Euro remains generally weak and is vulnerable to deeper fall. Adding to that, Dollar is also firm after stronger than expected core inflation reading. Canadian Dollar is supported by stellar job data. Sterling, however, gets not support on a mixed batch of data.

Technically, USD/CHF and USD/JPY are both bounded in tight range for the moment. It’s so far uncertain which one of USD, JPY and CHF will win the race for the near term. Similarly, USD/CAD is also staying in tight range below 1.3119 temporary top. But the bullish outlook in USD/CAD is relatively clearer than USD/JPY and USD/CHF. Elsewhere in the forex markets, the stories are already very clearly written in the charts. It’s just a matter whether the fast moving pairs will take a breath before weekly close. The more interesting development could be in treasury yield. 10 year yield is pressing 2.9 handle as bonds are boosted by flight to safety

Turkish President Tayyip Erdogan delivers a crisis speech the Lira extends recent free fall on US sanctions. Erdogan urges again the Turks to reach for their foreign exchange savings, and exchange dollar and gold for Lira. He said this is the most effective response to the west. And he named the economic attack against Turkey is due to “small differences of opinion” with certain powers”. He condemned that such attacks damaged their relationship with Turkey to a point where it’s impossible to repair. In short, Erdogan showed no sign of backing down.

Suggested reading on Turkey: Erdogan is to Blame For Turkish Lira’s Free Fall

The free fall in Turkish Lira is seen as a factors that heavily weighing on Euro today. It’s reported that ECB officials are increasingly worried about contagion from Turkey, due to the deep tie with Eurozone financial system.

According to Bank for International Settlements data, Spanish banks are are owed USD 83.3B by Turkish borrowers; French lenders are owed USD 38.4B; and banks in Italy are owed USD 17B. Meanwhile, the Financial Times noted that Spain’s BBVA, Italy’s UniCredit, and France’s BNP Paribas could be particularly impacted by the ongoing depreciation of the lira.

It’s seen that a complete banking crisis in Turkey will inevitably have huge impact on Eurozone banks, and even trigger credit crunch. Though, such a worst case scenario is seen as unlikely so far.