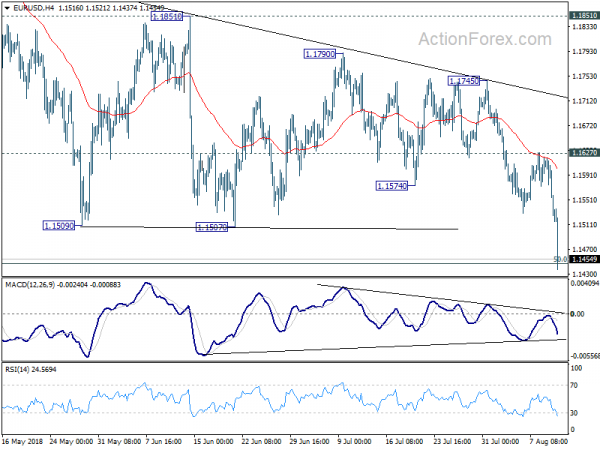 The focus in the forex market shifts just before weekly close. Selloff in Euro has clearly intensified, in particular with EUR/USD finally breaking through 1.5 support level. The development also drags down Australian Dollar as both are now trading as the weakest ones. That could partly be attributed to Fed dove Evan’s hawkish turn that lifted the Dollar. On the other hand, Yen is also capitalizing on the shift in focuses, with a little from stronger than expected GDP too. Meanwhile, Sterling and New Zealand Dollar, while staying weak, are relatively resilient as they have suffered enough selling earlier this week already. The upcoming economic calendar features UK GDP and productions, Canada employment and US CPI. More volatility is like guaranteed.

Technically, EUR/USD’s strong break of 1.1507 key support finally marks the end of the consolidation patter that started back in May. The down trend from February high at 1.2555 has resumed. Based on current momentum, it’s heading to 1.1186 long term fibonacci level. EUR/JPY and EUR/CHF are on course for 124.61 and 1.1366 low respectively, as expected. The point of interest right now, is whether AUD/USD will take out 0.7309 to resume the medium term down trend too.

The known dove Chicago Fed President Charles Evans started to turn hawkish in his comments to reports yesterday. Evans said the the economy is “extremely strong” and it’s “really a very good period of time” for both the economy and monetary policy setting. And Fed funds rate might eventually enter into “somewhat restrictive” area as economy strengthens while inflation stays above target.

He also noted that “inflation has moved up to 2 percent essentially”. There is “good reason to expect we will stay in that area.” Also, if inflation continues to be “on the order of 2, 2.2”, that “suggests only a modest amount of restrictiveness above our neutral rate might be called for in 2020.” And, “it would not surprise me at all if we make a judgment to move to a somewhat restrictive setting.” He cited it could be roughly 0.5% above his neutral rate of 2.75%.

Evans also downplayed the impact of Trump’s trade policy. He said “you size up the tariffs, the increases in input costs … and you find that while it sounds like a big number … the actual effect on industry output and GDP is still measured in a few tenths”of a percentage point. And, “the magnitude still seems to be relatively small, uncertain, against a context where the economy is very strong and we have just added quite a lot of fiscal stimulus.”

The Japanese Yen appears to be lifted by stronger than expected GDP data today. Japan economy grew 0.5% qoq, 1.9% annualized in Q2. That’s way stronger than expectation of 0.3% qoq, 1.4% annualized. It’s also a strong rebound from prior quarter’s -0.2% qoq, -0.6% annualized contraction. Q1 was an unexpected interruption in the best run in the economy since 1980s. In Q2, GDP deflator rose 0.1% yoy, also beat expectation of -0.2% yoy fall.

Private consumption, which accounts for 60% of the economy, grew an impressive 0.7%. The solid growth could be an indication of finally a changing “social mood” in the country. And people are more willing to spend based on the expectation that wages will eventually rise. Getting out of such “social mood” is important for Japan to beat the persistent trend of sluggish low inflation. Such development should be very welcomed by BoJ Meanwhile, Capital expenditure rose 1.3%, strongest since Q4 2016.

Japan’s Economy Minister Toshimitsu Motegi started trade talks with US Trade Representative Robert Lighthizer yesterday. After hours of meeting, Motegi said “we had a frank exchange of views and deepened mutual understanding.” He declined to reveal what were discussed and added that he would “say what I can after the first round of talks end”.

But Motegi reiterated Japan’s position that multilateral framework is the best way to address trade issues. The country is insisting to avoid a bilateral free-trade agreement. Instead, Japan would like to pull the US back into TPP, the Trans-Pacific Partnership.

The USTR later said that “ambassador Lighthizer and Minister Motegi had a thorough and constructive exchange of views on all bilateral trade issues.” And, “they understand each other’s conditions for further discussions and plan to move forward with additional talks.”

The RBA Statement on Monetary Policy revealed nothing new give then Governor Philip Lowe had delivered an update in a speech earlier this week. In the SoMP, RBA, reiterated that “higher interest rates are likely to be appropriate at some point, if the economy continues to evolve as expected.” That is, the next move is “up not down”. But, Given the gradual nature of the improvement, however, the Board does not see a strong case to adjust the cash rate in the near term.

RBA’s new economic forecasts appear to be largely unchanged from the May SoMP.

Also released down under, New Zealand BusinessNZ manufacturing PMI dropped to 51.2 in July, down from 52.8.

The Swiss government announced today that they recommend business to continue to pursue ties despite US sanctions. Fabian Maienfisch of the State Secretariat for Economic Affairs said that “U.S. decisions on sanctions do not affect the legal situation in Switzerland with regard to Iran.” He added that “Switzerland regrets that the sanctions situation in relation to Iran is again deteriorating.” He added that while the government cannot dictate responses from businesses, it “recommends that companies pursue their commercial relations with Iran and inform themselves about the situation”.

The economic calendar is rather busy today. UK Q2 GDP is a major focus. Productions and trade balance will also be released. Later in the day, Canada job data and US CPI will be released. All these data could be market moving.