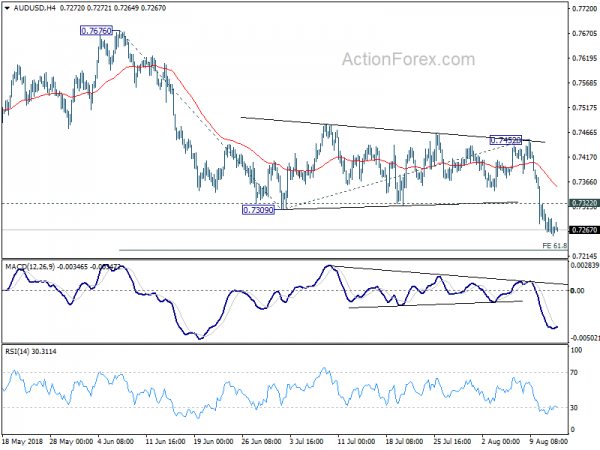 The forex markets are rather steady today. Turkish turmoil seemed to have passed its climax for the near term. Swiss Franc and Yen are trading lower as that part of risk aversion receded. Meanwhile, New Zealand, Canadian and Australian Dollar are generally higher, together with Sterling. Though, it remains to be seen if stock market selloff will extend for reasons other than Turkey. Meanwhile, we want to point out the relatively shallow retreat in Dollar against Euro, Sterling and Aussie so far. Gold’s medium term down trend has just resumed and is set to take on 1190. They could be indications that Dollar might take over the driving seat from Yen in the next move.

Technically, Yen crosses should have turned into near term consolidations, with risk of stronger recovery. The same applies for Swiss Franc crosses too. USD/CHF and USD/JPY will be two pairs to watch today. Break of 0.9984 in USD/CHF and 111.17 in USD/JPY will indicate near term strength in Dollar against the two safe-haven currencies. And that could prompt stronger rally in Dollar against others as the greenback regains control.

Australia NAB business conditions dropped -2pts to 14 in July. Business confidence rose 1pt to 7. Alan Oster, NAB Group Chief Economist noted in the release that the business conditions index “has now fallen considerably since April”. But business conditions remain “above average”, suggesting “favourable conditions have continued to persist through the middle of 2018”. The weakness in profitability and trading conditions was partially offset by improvement in employment.

Overall, the survey results were broadly in line with NAB’s outlook. Business sector looks “relatively healthy”. Growth in employment will reduce spare capacity gradually. And that should bring in a “rise in wage and a more general lift in inflation”. However, trends in forward indicators will be watched, which may be signaling slowdown.

Weaker than expected data show further cool down in China

In particular, fixed asset investment growth was the slowest on record since early 1996. That suggested weakening business confidence that could be hurt by rising trade tensions with the US, as well as China’s own deleveraging policy. Weak retail sales highlights the difficulty of shift focus to domestic consumption for growth momentum, in case of a full-blown trade war.