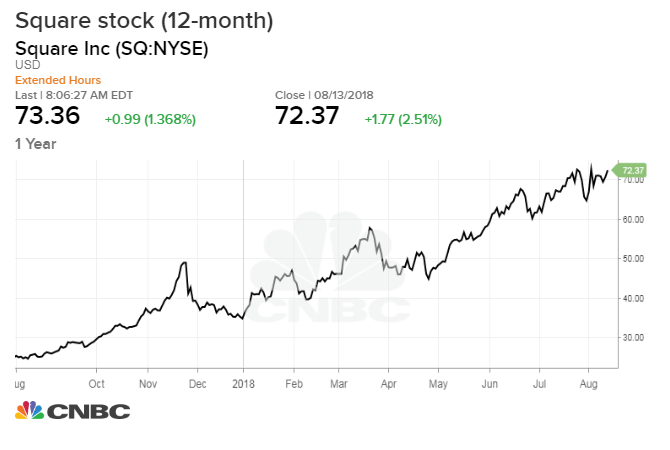 Cumulative downloads of Square’s Cash app have surpassed those of Paypal’s Venmo for the first time after a monster July, according to data from Sensor Tower and Nomura Instinet.

Cumulative downloads for the Cash App now total 33.5 million, exceeding Venmo’s 32.9 million for the first time ever, after Square’s service grew three times faster than its competitor from PayPal in July, the data showed.

The No. 1 position should boost Square’s shares, Nomura Instinet analyst Dan Dolev told clients Tuesday, with the popular application set to contribute as much as $30 million to $40 million (or 2 percent to 3 percent) of adjusted net revenues in 2018, he estimates.

“If the Cash App continues to grow rapidly, the business could reach or even exceed $100 million in sales by 2020, even without deeper active user penetration,” Dolev said in a note to clients Tuesday. “With impressive user growth and ongoing decoupling from Bitcoin, we believe Square’s monetization efforts are increasingly bearing fruit.”

The analyst raised his revenue estimates for the payments company and adjusted his 12-month target higher to $86, implying 18.8 percent upside over the next year; Dolev has a buy rating on shares of Square.

Venmo and Square Cash provider users with access to their financial system, allowing customers to electronically send, store and spend money between peers. Square chief financial officer Sarah Friar told investors during the company’s latest earnings call that she was happy to report that Cash App is consistently a top-30 app in the App Store.

In June 2018, Cash App customers spent $250 million with Cash Card, nearly tripling since December 2017 and representing $3 billion on an annualized basis, according to the company’s second-quarter release. In the second quarter of 2018 in the U.S., it was the number-one finance app and on average a top-30 free app in the App Store, the company added.

Dolev also reemphasized his thesis that Square is “more than just a bitcoin play,” highlighting Cash App’s success despite a recent slowdown in downloads of cryptocurrency platform Coinbase and depressed coin prices.

Shares of Jack Dorsey’s company spiked in November after a company spokesperson told CNBC that it was testing support for bitcoin trading through its payment app, hoping to capitalize from the then-feverish fascination with the cryptocurrency.

The price of bitcoin has dropped more than 50 percent from highs seen last December nearly $20,000; the asset was last seen trading at $6,021 Tuesday morning.