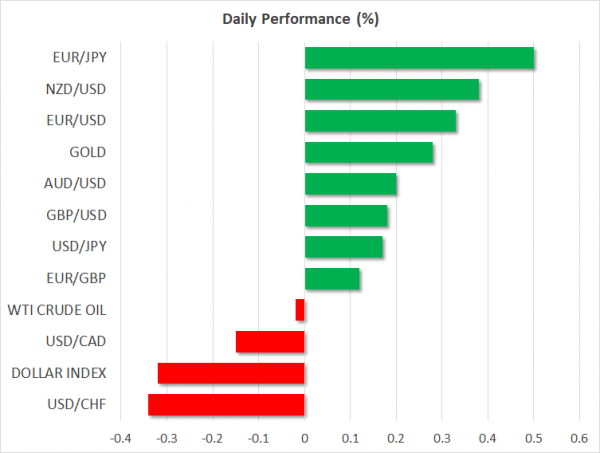 FOREX: The dollar index continued to trade lower early in the European session, weighed by comments made by the US President late on Tuesday who said that he is “not thrilled” about the central bank’s decision to raise interest rates this year as his administration is making efforts to reduce trade deficit and higher interest rates combined with a stronger dollar would limit export growth. He also accused China and the Eurozone of manipulating their currencies; the response from the Chinese side was mild, with the PBOC expressing hopes the US and China could communicate on the issue and that the yuan will not be used as a weapon to mitigate the impact from import tariffs. German officials, though, supported that the bloc is not manipulating its currency. The dollar index hovered around 95.50 (-0.41%), near the two-week low of 95.44 it reached earlier today, whereas dollar/yen managed to remain in the green, inching up to 110.24 (+0.16%). Euro/dollar held onto gains, changing hands at 1.1515, slightly below today’s two-week high of 1.1543 (+0.40%). Pound/dollar was also in bullish mode at 1.2815 (+0.15%) ahead of the resumption of Brexit talks today. Euro/pound stood at 0.8982 (+0.13%). In Switzerland, the Swiss National Bank was said to deliver its first rate hike in Q3 2019 according to a Bloomberg survey compared to Q4 2019 estimated previously, sending dollar/franc down to a one-month low of 0.9864. In the antipodean space, aussie/dollar remained on the upside at 0.7352 (+0.20%), shrugging off Prime Minister’s narrower than anticipated leadership win and the relatively dovish RBA meeting minutes released earlier in the day. Kiwi/dollar was also stronger at 0.6663 (+0.38%) before the release of global dairy prices. Dollar/loonie was down at 1.3028 (-0.15%), while dollar/lira strengthened further to 6.12 (+0.85%).

STOCKS: Excluding the UK’s FTSE 100 which was weaker by 0.17%, European stocks were rising at 1040 GMT. The pan-European STOXX 600 and the blue-chip Euro STOXX 50 were up by 0.34% and 0.31% respectively, with technology stocks leading the gains and basic materials underperforming. The German DAX 30 climbed by 0.72%, the French CAC 40 rose by 0.79%, while the Italian FTSE MIB continued to recover on Tuesday, surging by 1.47%; on Friday, the index dropped to the lowest since April 2017. US futures tracking the S&P 500, Dow Jones and Nasdaq 100 were all in positive territory, pointing to a higher open today.

COMMODITIES: Oil prices were on the rise early in the European session, with WTI crude crawling up to $66.98/barrel (+0.83%) and Brent moving up to $72.36/barrel (+0.21%), as reports stated that US supplies of heating oil and diesel are expected to tighten in the coming months. In other news, while renewed US sanctions against Iran (the third largest OPEC producer) and demands from Washington for Iranian oil buyers to cut their imports have already slashed operations in the region, China (Iran’s biggest oil customer) insists on maintaining its Iranian oil purchases. In precious metals, gold was looking set to close the day in positive territory for the third consecutive day, last seen at $1,1193.80/ounce (+0.31%).

Tuesday is relatively quiet in terms of economic releases, leaving potential trade headlines to move the markets as trade discussions between the US and China are expected to take place in Washington on Wednesday and Thursday.

The Turkish-related turmoil will remain in focus as Trump mentioned that the US will not make any concessions to Turkey in order to secure the freedom of the detained pastor, which suggests that an immediate resolution of the stand-off between the two nations may be distant.

As for Brexit, the UK’s negotiator Dominic Raab will be meeting with his EU counterpart Michel Barnier in Brussels. Meanwhile, UK ministers are unveiling their plans for a no-deal Brexit to show Britain is prepared in case talks collapse with no agreement. It is worth mentioning that the deadline for an agreement is in October and a lack of positive developments could be perceived as negative for the currency.

Looking at the calendar, Canadian wholesale trade data for the month of June are scheduled for release at 1230 GMT. Also, in New Zealand, global dairy prices published at a tentative time today after the conclusion of the bi-weekly milk auction will be of most importance before retail sales figures come into view at 2245 GMT. Quarter-on-quarter, retail sales are forecasted to expand by 0.4% for the second quarter, above the 0.1% growth recorded previously.

In energy markets, investors will look forward to the API weekly report due