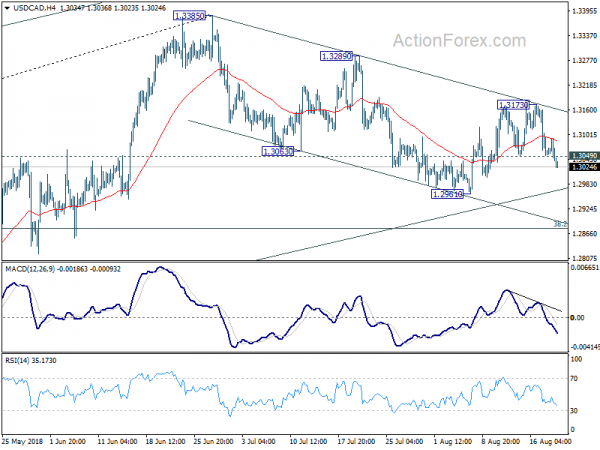 Dollar weakens broadly overnight on Trump’s attack on Fed’s policy. It started after Bloomberg reported that Trump lamented Fed chair Jerome Powell for not being the “cheap-money” chair he expected. Then Trump reiterated his comments that he’s “not thrilled” with interest rate hikes in Reuters interview. But this time, Trump hid the fact that rate moves at Fed were collective decision. And he embedded a lie in his language by blaming Powell for “his” raising of interest rates. The comments sent Dollar sharply lower, and the greenback extends decline in against all other major currencies.

Technically, while Dollar is weak, EUR/USD and AUD/USD are far from structural resistance at 1.1745 and 0.7452 respectively. Thus, these two pairs are staying bearish. However, USD/JPY’s fall now puts 109.36 key support in focus and break will indicate medium term reversal. Similarly, USD/CAD’s decline also put 1.2916 support in focus and break will raise the chance of medium term reversal too. If happens, weakness in USD/JPY and USD/CAD could be early signal of more Dollar selloff ahead.

Dollar stays generally weak in Asian session and extends Monday’s selloff, on Trump’s attack on Fed. In a Reuters interview, Trump reiterated his comments last month that “I’m not thrilled with his raising of interest rates, no. I’m not thrilled,” referring to Fed Chair Jerome Powell.

He complained the the US is not getting any support from the Fed during his negotiation with other countries. Trump noted, “we’re negotiating very powerfully and strongly with other nations. We’re going to win. But during this period of time I should be given some help by the Fed. The other countries are accommodated.”

Trump also fingered pointed at Eurozone and China for currency manipulation to give them an advantage over the US on trade. He said . “I think China’s manipulating their currency, absolutely. And I think the euro is being manipulated also.”

On trade dispute with China, Trump said he had “no time frame” for ending it. While the Chinese delegation is arriving the US soon, Trump said he did not “anticipate much” from the discussions.

He emphasized that the resolution will “take time” because “China’s done too well for too long, and they’ve become spoiled. They dealt with people that, frankly, didn’t know what they were doing, to allow us to get into this position.”

Mark Sobel, a former top US Treasury Official criticized Trump’s remark regarding Chinese currency manipulation as “woefully wide of the mark”. And, Trump’s focus on bilateral balances as “silly”. And, to suspect a country of currency manipulation, there are criteria of “material ‘excessive’ current account surplus, an undervalued currency, and ample and rising reserves”.

In an article titled “Trump wide of mark on ‘manipulation‘”, Sobel point to facts that “China’s current account surplus is falling to under 1% of GDP. The renminbi, hit by capital outflows between early 2015 and the end of 2016, rose sharply against the dollar up to April 2018. The renminbi trade-weighted index rose too. Since then, the renminbi has fallen on both measures, but the depreciation reflects the dollar’s strength across the board. There is little evidence of more than scant Chinese foreign exchange market intervention.”

He noted “a currency manipulating country should have a significant current account surplus”. And, “the US Treasury in its foreign exchange reports uses a 3% of GDP threshold.” While a currency manipulating country might also have an “undervalued currency” one should “look at a country’s real effective exchange rate, not its bilateral dollar rate.” Additionally, the country may intervene heavily in the markets, “buying dollars to hold its currency down, resulting in an increase in its foreign reserve holdings.” But there might be “good reasons” to do so such as building up of reserves. There are many useful gauges of reserve adequacy to examine – reserves/GDP; reserves/short-term maturing debt; reserves/imports.

Sobel also completed that “a focus on bilateral balances is silly, even if the US Treasury is required to do so by statute and the president seems obsessed with them. Such an emphasis neglects to consider that certain countries specialize in certain goods and hold comparative advantage in such spheres.”

Atlanta Fed President Raphael Bostic said that Fed is doing well on inflation now, and the economy doesn’t need as much stimulus as it had before. Also, GDP is strong and unemployment is “very, very low” historically”. This part seems to be a bit h