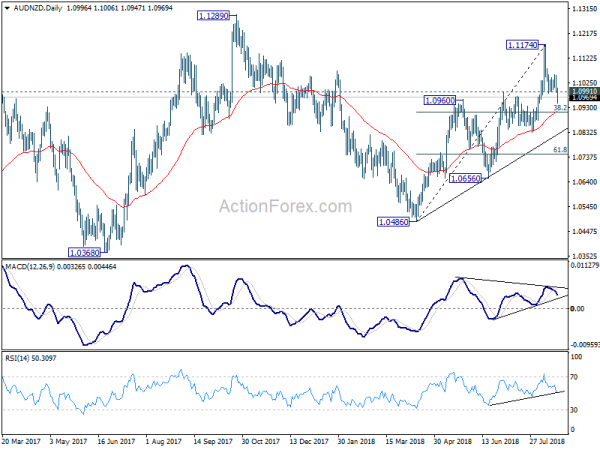 Dollar and Yen remains the weakest one for the week. While sell-off slows a little bit in Asian session, there is no sign of bottoming yet. Dollar is apparently still weighed down by Trump’s comments on Fed policy. On the other hand, Yen is pressured by solid risk appetite. S&P 500 hit new record high at 2873.23 last week. While it couldn’t hold on to the gains and closed just up 0.21% at 2862.96, upside momentum remains firm. For today, New Zealand Dollar is trading as the strongest one as boosted by strong retail sales. Sterling follow as second as supported by positive outcome of Brexit negotiation.

Technically, Australian’s weakness is a point to note and watch today. AUD/NZD’s break of 1.0991 support is a clear sign of weakness. EUR/AUD also broke 1.5725 resistance overnight to resume the rebound from 1.5578. And, AUD/USD also starts to lose upside momentum as seen in 4 hour MACD. We might see the Australian Dollar turns weaker today.

Raab said they had “positive” discussions and UK reaffirmed the commitment regarding Irish border. Raab said there are still “some significant issues to overcome”. Both agreed the need to “step up the intensity” during the final phase of the negotiations. Raab also emphasized that “if we have that ambition, that pragmatism and that energy on both sides, I’m confident we can reach that agreement by October.”  Regarding no-deal Brexit, Raab said “some of these hair-raising scare stories are far from true””

Both sides will meet again in Brussels next week.

Dallas Fed President Robert Kaplan said in an essay released yesterday that he estimation of the neutral real interest rate is in a “broad range around 0.50-0.75 percent”. And translated to nominal rate, that’s “roughly 2.50-2.75 percent”. That is, with fed funds rate at 1.75-2.00%, it would take approximately “three or four” more 25bps rate hike to reach the neutral level.

On monetary policy, he believed that Fed should “gradually” raise Fed funds rate until this neutral level. And for now, he would be “inclined to step back and assess the outlook for the economy and look at a range of other factors”. Those factors include “levels and shape of the Treasury yield curve”, before further action.

There’s clearly divergence in the emphasis of the views of Fed policy markets. Chicago Fed President Charles Evans said two weeks ago that fed fund rates might eventually enter into “somewhat restrictive” area, at roughly 0.50% above 2.75% neutral rate. Kaplan didn’t show objection to this idea but he emphasized to pause and look before acting.

On the other hand, Atlanta Fed President Raphael Bostic pledged earlier this week that he won’t vote for anything that knowingly inverts yield curve. But Kaplan said he supports raising rate to neutral before looking at the yield curve.

Mexico and the US postponed a high level NAFTA meeting to Wednesday (originally scheduled for Tuesday yesterday). Politico quoted unnamed sources saying that the two sides are targeting to formally announce an agreement on Thursday. And after that Canada would be allowed to rejoin the negotiations.

However, as of now, there is not clear message that a deal is reached between Mexico an the US. A US Trade Representative spokesman said “there is no deal on NAFTA. There are major issues outstanding.” Mexico also denied the “handshake” deal with the US. Meanwhile, Canadian government also said it received no notification of an imminent NAFTA deal.

Eyes will stay on the postponed meeting between Mexican Economy Minister Ildefonso Guajardo and US Trade Representative Robert Lighthizer today.

US Commerce Secretary Wilbur Ross said yesterday that the timeline for auto tariffs investigation is postponed. Ross originally said the report will be published some time in August. But he told WSJ