Dollar Modestly Down Ahead Of US-Chinese Trade Talks And FOMC Minutes, Oil Advances 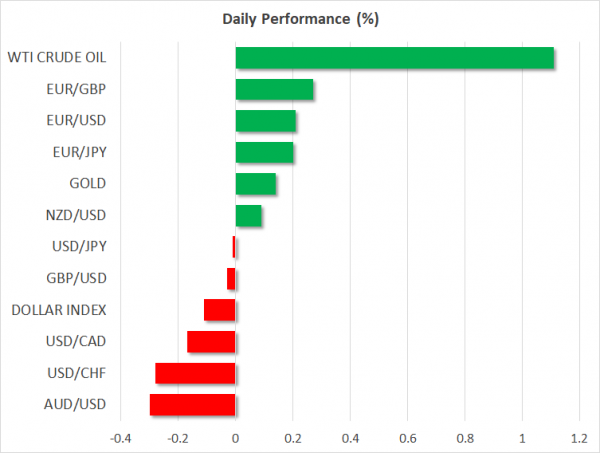 FOREX: Both dollar/yen and the dollar index, which gauges the dollar’s strength versus six major currencies were not much changed, fluctuating around 110.40 (-0.02%) and 95.14 (-0.12%) respectively before the widely expected trade talks between China and the US begin later today. Meanwhile, there’s a political noise in the US as two former associates to the US president were declared to be guilty of financial crimes on Tuesday. Yet, the markets largely ignored the news. FOMC meeting minutes due later today could bring volatility to the markets. Euro/dollar stretched slightly up to 1.1597 (+0.24%), while pound/dollar consolidated gains at 1.2895 on hopes the EU and the UK could secure a Brexit agreement by October’s EU summit. The antipodean currencies were mixed, with kiwi/dollar steady at 0.6692 and aussie/dollar down at 0.7351 (-0.26%). The commodity-linked loonie was slightly stronger, with dollar/loonie at 1.3011 (-0.18%) ahead of retail sales readings out of Canada, while the Mexican peso was erasing gains made after sources stated that the US and Mexico are close to agreeing on NAFTA terms. Dollar/lira changed hands higher at 6.08 (+0.56%) after dropping to a one-week low of 5.66 on Thursday.

STOCKS: At 1000 GMT, the pan-European STOXX 600 and the blue-chip Euro STOXX were marginally weaker. The German DAX and the Italian FTSE MIB were steady, while the British FTSE 100 was also moving sideways. The French CAC 40 climbed by 0.16%. In the US, futures tracking the S&P 500, Nasdaq 100 and Dow Jones were pointing to a negative open. Recall that during Tuesday’s session S&P 500 registered an intra-day record high.

COMMODITIES: WTI crude continued to gain during the early European session, surging to $66.54/barrel (+1.06%) after the API weekly oil report indicated a downfall in US crude oil inventories instead of a buildup as analysts predicted. Concerns over the US-Iranian relations and a potential shortfall in Iranian supply due to renewed US sanctions were also supportive of prices. The London-based Brent was higher at $73.55 (+1.27%), looking set to finish the day in the green for the fifth straight time. In precious metals, gold maintained the positive momentum recorded in the previous three days, edging up to $1.197/ounce (+0.11%).

Apart from US-Chinese talks, investors will keep a close eye on the FOMC minutes due at 1800 GMT as well. In the latest meeting, the Committee decided to leave interest rates steady as was widely anticipated, while it made a small change to the accompanying statement; policymakers mentioned that economic activity has been rising at a “strong” rate, instead of a “solid” rate as was included in the previous statement. The Committee also kept the door open for two more rate increases by the end of the year. If the minutes reflect deep worries by policymakers on trade, this could pressure the dollar. On the other hand, if policymakers appear surprisingly more optimistic about the economy despite trade risks, the greenback could go higher.

As for trade talks, Chinese and US low-level officials will be meeting in Washington today, with traders waiting for negotiations to bring a breakthrough in the US-Sino relations.

Any Brexit developments will be of importance to investors following yesterday’s talks in Brussels which appeared somewhat positive after UK’s Brexit negotiator, Dominic Raab, said the UK is still confident it can reach an