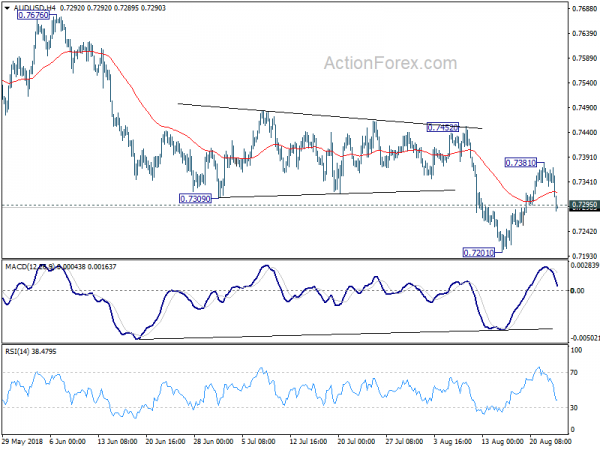 Political turmoil in Australia takes the headline over from the US as the Aussie dives broadly today. While two former aides of Trump are likely going to jail soon, special prosecutor Robert Mueller’s investigation will take long to complete. However, Australia could have the seventh Prime Minister in a decade in a matter of weeks, or even days. Meanwhile, the greenback is now trying to pare back its earlier loss as another round of tariffs on China kicks in. The low-level trade talks in Washington are not expected to yield any result. FOMC minutes released overnight indicated Fed is on course for September hike, which is Dollar positive too.

Meanwhile, New Zealand Dollar is back under pressure as its recovery faded, Euro follow s the third weakest for today together with Sterling. Eurozone PMIs and ECB meeting accounts will be watched today. Swiss Franc, on the other hand, is trading as the second strongest for today, next to Dollar.

The minutes of the July 31-August 1 FOMC minutes revealed nothing that the markets didn’t know. Fed is going to raise the fed fund rate again in September, by 25bps to 2.00-2.25%. The minutes noted that “, any participants suggested that if incoming data continued to support their current economic outlook, it would likely soon be appropriate to take another step in removing policy accommodation.”

Stimulus remove is going to continue gradually as “participants generally expected that further gradual increases in the target range for the federal funds rate would be consistent with a sustained expansion of economic activity, strong labor market conditions, and inflation near the Committee’s symmetric 2 percent objective over the medium term.”

Risks for economic forecasts are “balanced”. On the upside, ” household spending and business investment could expand faster over the next few years than the staff projected, supported in part by the tax cuts enacted last year”. On the downside, “trade policies could move in a direction that would have significant negative effects on economic growth”

Flattening of yield curve is a concern among some policy makers. “Several participants cited statistical evidence for the United States that inversions of the yield curve have often preceded recessions”. But, “other participants emphasized that inferri