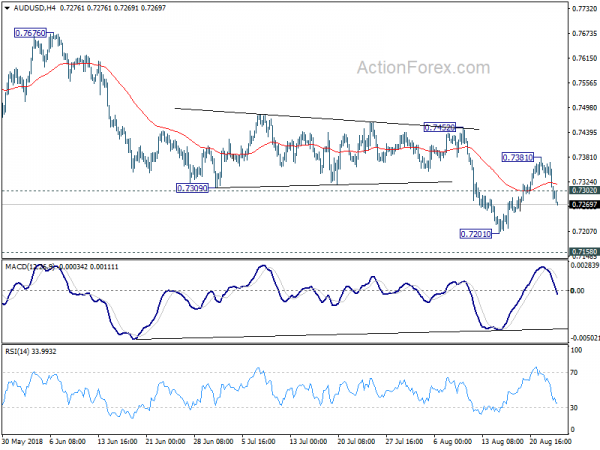 Dollar is still trading as the strongest for today even though the rebound looks a bit unconvincing. In particular, the greenback is effectively just range bound against against European majors. And in fact, it’s taking turn to be the strongest with Swiss Franc. Meanwhile, Australian Dollar remains the weakest one, followed by New Zealand Dollar. The Aussie is weighed down by its own political turmoil. There is a high chance Prime Minister Malcolm Turnbull would be ousted as soon as tomorrow. And it’s uncertain who of Treasurer Scott Morrison, former Home Affairs Minister Peter Dutton, or Foreign Affairs Minister Julie Bishop would get enough vote for party leadership and the top job.

In other markets, European indices are trading nearly flat today, “flipping” between gains and losses in very tight range. China’s Shanghai SSE rose 0.37% to close at 2724.62 as new rounds of tariffs from US and China takes effect. Hong Kong HSI dropped -0.49%. Nikkei rose 0.22% and Singapore Strait Times rose 1.56%. Gold breached 1187.40 minor support earlier today but refuses to give in so far.

Technically, weakness of Australian Dollar will remain a main theme in the US session. EUR/AUD just took out 1.5888 resistance to resume the rally from June’s low at 1.5271. It’s heading to 1.6 handle and will very likely challenge 1.6189 resistance in near term. Meanwhile, 1.1493 minor support and EUR/USD and 1.2811 minor support in GBP/USD will be watched to confirm if Dollar is really completing this week’s pull back.

In a brief statement, the Chinese Ministry of Commerce said “China resolutely opposes this, and will continue to take necessary countermeasures.” And, “at the same time, to safeguard free trade and multilateral systems, and defend its own lawful interests, China will file suit regarding these tariff measures under the WTO dispute resolution mechanism.”

In the accounts of July monetary policy meeting, ECB noted that “members considered that the risks surrounding the euro area growth outlook could still be assessed as broadly balanced”. Though, there are uncertainties related to global factors “notably the threat of protectionism.”. Also, “risk of persistent heightened financial market volatility also continued to warrant monitoring.”

On inflation, there was “broad agreement” on chief economist Peter Praet’s assessment. Annual HICP inflation rose to 2.0% in June. And, “on the basis of current futures prices for oil, annual rates of headline inflation were likely to hover around the current level for the remainder of the year”. Muted underlying inflation “had been increasing from earlier lows”. Also, there was “increasing support” for domestic cost pressures from “ongoing strengthening in wage growth”. Beside, “members broadly shared the view that uncertainties surrounding the inflation outlook had been receding.”

Regarding communications, “members widely expressed satisfaction that the communication of the June monetary policy decisions had been well understood by financial markets.” And, the “enhanced forward guidance on the future path of policy rates had been effective in aligning market views”. That is, ECB interest rates would remain at current levels “at least through the summer of 2019”. It “struck an appropriate balance” between precision and flexibility and “was remarked that the Governing Council’s expectation was probabilistic in nature.”

Bundesbank Weidmann: Get the normalization ball rolling without undue delay

Bundesbank President Jens Weidmann warned today that ECB must not delay monetary policy normalization. He said, it’s ” time to begin exiting the very expansionary monetary policy and the non-standard measures, especially considering their possible side effects.” And, such normalization process would “take place only gradually over the next few years.” That “exactly why it has been so important to actually get the ball rolling without undue delay.”

Weidmann added that ECB’s projection of 1.7% headline inflation for 2020 is “br