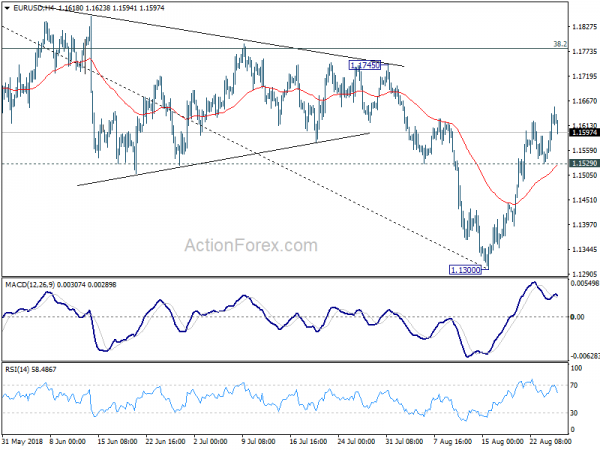 Risk appetite was rather strong in Asian session today. Nikkei closed up 0.88% at 22799.64. At the time of writing, Hong Kong HSI is up 2.05%, China Shanghai SSE is up 1.70% and Singapore Strait Times is up 0.63%. The rally in stocks is partly due to record close in NASDAQ and S&P 500 on Friday. Also, the markets responded positively to the PBoC’s measures to pause Yuan’s decline. In short, China’s central bank reintroduced measures that acts counter-cyclical to market forces to keep Yuan from falling too quickly. Yuan hit the highest level in more than two weeks earlier today but there is no follow through buying.

The currency markets are mixed though. Yen is trading as the strongest one despite strong rally in equities. Canadian Dollar follows as the second strongest. Meanwhile, Dollar regains some ground and is trading as the third strongest. Euro, on the other hand, is paring back some of the last week’s gains. Australian and New Zealand Dollar follow as the second weakest. Though, it should be noted that except USD/JPY and CAD/CHF, all major pairs are bounded in Friday’s range, indicating lack of clear direction.

Technically, dollar index should be in medium term correction now. More upside is in favor in EUR/USD as long as 1.1529 minor support holds. Similarly, more decline is expected in USD/CHF as long as 0.9889 minor resistance holds. But the greenback is staying in established range against Sterling, Australian and Canadian Dollar. It’s yet to be seen which side the Dollar is taking. Meanwhile, today’s retreat in USD/JPY is putting focus back to 110.74 support and break will invalidate near term bullishness.

Japanese Prime Minister Shinzo Abe declared his candidacy for leadership of the Liberal Democratic Party on Sunday. The party leadership contest will be held on September 20, as a two horse race between Abe and former defence chief Shigeru Ishiba.

The re-election should be an easy win for Abe as he’s got support from give of the LDP’s seven intraparty factions, which encompass around 70% of its members. A win will give Abe another three year term and he’s then on track to become the country’s longest-serving Prime Minister.

Abe told a press conference that “I have decided to lead Japan as the LDP leader and the prime minister for three more years, and with this determination, I will run for the leadership election next month.” He added that “as we prepare to welcome a historic turning point, what kind of country we want to create will be a contentious issue,” and, “I am determined to steer Japan in a new era.”

Mexico and US in final hours of bilateral NAFTA talks

The bilateral US-Mexico NAFTA talk is still dragging on. But Mexican Economy Minister Ildefonso Guajardo said on Sunday that “we’re practically in the final hours of this negotiation.” Nonetheless, at a lunch break of the meeting, Guajardo said he cannot declare victory yet.

Trump also expressed optimism as he tweeted that “A big Trade Agreement with Mexico could be happening soon!” And, “Our relationship with Mexico is getting closer by the hour. Some really good people within both the new and old government, and all working closely together”.

Canada is expected to return to the supposed trilateral talks after the US and Mexico complete their negotiations. The three way talks will run well into September and possibly beyond. The US Congress needs 90 days notice to vote on a new NAFTA. The final approval of the deal on Mexico side will be on Lopez Obrador’s hands, as he’s due to take office on December 1.

US PCE, Canada GDP and China PMIs to watch in a slow week

Looking ahead, this last week of August is relatively light. US PCE is a major focus. Fed Chair Jerome Powell was clear in his speech that “if the strong growth in income and jobs continues” further rate hikes are appropriate. But that was in the context of no acceleration in inflation above 2%. With no sign of slowdown in the job market, the key to Fed’s path beyond neutral rate lies in when and whether inflation will pick up.

Canada GDP is another focus. For now, we’re still leaning towards an October BoC hike but there are speculations of a September hike. We’ll see if GDP supports which one. China’s PMIs will probably reveal how businesses are affected by the escalating trade war with the US.