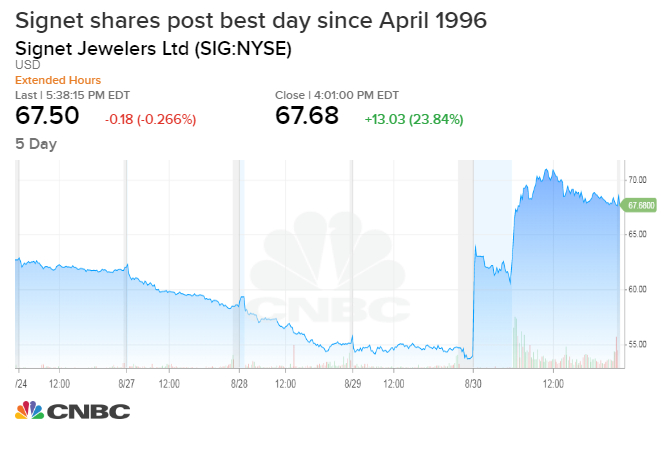 Shares of Signet surged more than 20 percent Thursday after the jewelry retailer reported better-than-expected results and boosted its full-year outlook.

Signet — the owner of Kay Jewelers, Zales and Jared jewelry stores — reported earnings that were more than double estimates and posted revenue well above forecasts, including a 1.7 percent increase in sales at stores open for at least 12 months. Sales at Zales rose 7.1 percent while sales at the Bermuda-based retailer’s Piercing Pagoda brand jumped 11.5 percent.

Those results sent Signet’s stock surging, with it posting its best day in more than two decades, dating to April 1996. The stock traded as high as $71.07, its highest intraday level since November 2017.

Signet’s bullish sales report comes in the wake of a surprise uptick in retail sales last month. Retail sales in the U.S. jumped a half percent last month, and 6.4 percent from a year ago.

Here’s what the jewelry retailer reported for the second quarter compared with what Wall Street analysts polled by Thomson Reuters expected:

Signet’s performance was buoyed by double-digit sales growth from from its e-commerce websites and strong revenue in North America. Signet has now beat sales expectations for three consecutive quarters.

The strong results come at a moment of transition for the jewelry retailer. The company said CFO Michele Santana is planning to leave in 2019 after a successor has been appointed.

This past March, Signet also announced a three-year restructuring plan that included significant investments in e-commerce and digital marketing. CEO Virginia Drosos said that this past quarter brought “signs of stabilization” in the company’s sales but did caution that the company remains cautious on its outlook amid the rollout of a new sales initiative heading into the end of the year.

“We are still early in our transformation plan and continue to expect the vast majority of our operating profit to be generated in the fourth quarter while we have seen some improvement in the first half; we recognize there is still a lot of work ahead to deliver a successful holiday season,” Drosos said on the earnings conference call. “We feel good about our holiday preparations, but recognize that we are making multiple changes in our business this holiday, including branding, product assortment and value equation.

Signet’s upbeat report comes as shares of its peers have lagged in recent days. Tiffany initially surged after reporting better-than-expected results on Tuesday due to strong demand in the Americas and China, but closed up just 1 percent. The stock also fell more than 4 percent on Wednesday.

Before Thursday’s earnings report, shares of Signet had fallen more than 3 percent this year as of Wednesday’s close.