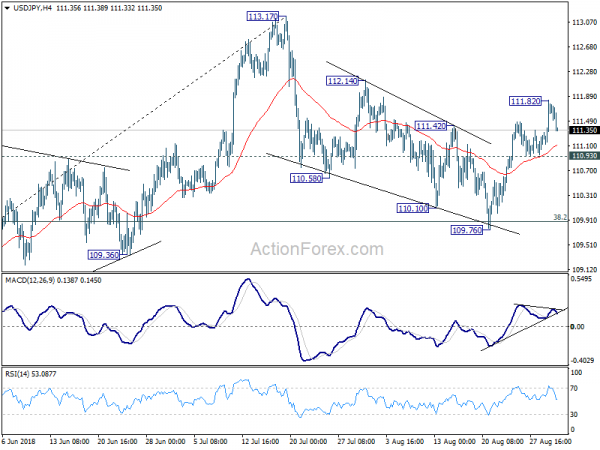 Yen regains some ground today as global markets, except US, are back in risk averse mode. Another day of selloff in the Turkish Lira is a reason for the selloff in European stocks. USD/TRY hits as high as 6.839 today and is currently up 4.76 %, 7.00 handle is within touching distance. Weakness in Chinese stocks and Asia is another factors weighing down sentiments. The US is making progress in trade negotiations with Mexico, Canada and the EU. But China as an outsider to the allies is left behind. Swiss Franc is following as the second strongest for today, Dollar as the third strongest.

Commodity currencies are generally under pressured. New Zealand Dollar was sold off earlier today on terribly bad business confidence data. Canadian Dollar also suffers some selling after Q2 GDP miss. USD/CAD surges on the back on contrasts in US and Canadian Dollar. However, it should be emphasized that 2.9% annualized growth is never a bad number for Canada. BoC is going to hike again, just a matter of September or October. And both Trump and Canadian Prime Minister Justin Trudeau expressed optimism that a trade deal can be concluded this week. So, we’d suggest not to be too bearish on Canadian Dollar.

In other markets, major European indices are all in red, with FTSE down -0.76%, DAX down -0.74% and CAC down -0.57%. EU showed friendly hands to UK on Brexit negotiation. It also indicated that auto tariffs can be scrapped if US does the same. But these positive factors are seemingly not enough to offset worries over Turkey. Earlier today Nikkei closed up 0.09%, Hong Kong HSI down -0.89%, China Shanghai SSE down -1.14% and Singapore Strait Times down -0.56%. Gold continues to trade in tight range above 1200 handle as consolidation extends.

Canada data was slightly less impressive. GDP rose 0.0% mom in June versus expectation of 0.2% mom. For Q2, GDP grew 2.9% annualized, slightly below expectation of 3.0%. Exports was the main driver to Q2’s growth, up 2.9%. Consumer spending growth also rose 0.6%. However, there was deceleration in business investments, contraction in inventories and imports. The set of data doesn’t add any additional reason for BoC to hike in September instead of October.

EU Trade Commissioner for Trade Cecilia Malmström told the European Parliament’s trade committee that they are willing to scrap auto tariffs in the negotiation with the US. She noted “we said that we are ready from the EU side to go to zero tariffs on all industrial goods, of course if the U.S. does the same, so it would be on a reciprocal basis.”

And, “we are willing to bring down even our car tariffs down to zero … if the U.S. does the same,” she said, adding that “it would be good for us economically, and for them.”

But she also emphasized that it’s not about “restarting TTIP” but aiming for “a more limited trade agreement.” And more importantly, “agriculture would not be in the agreement, nor public procurement as it looks to today.”

Eurostats noted that “the decrease in the euro-area sentiment indicator resulted from a marked deterioration of confidence among consumers and a milder decrease in the services sector, which were only partly offset by increases in the retail trade and construction sectors.” Meanwhile, “confidence in the industry sector remained broadly stable”.

Business climate indicator dropped to 1.22, down from 1.29 and missed expectation of 1.25.

EU Barnier: Irish border the most sensitive point but a solution is possible

EU chief Brexit negotiator Michel Barnier talked to German broadcaster Deutschlandfunk with a more neutral tone on Brexit today. He said that EU should be prepared for every outcome, and “that includes the no-deal scenario”. He also mentioned that the issue of Irish border was the “most sensitive point” of the negotiations. But he also noted that it is “possible” to have a solution.

Barnier said yesterday that the EU is “prepared to offer Britain a partnership such as there never has been with any other third country.” That’s taken as a sign of commitment to a deal.

Separately, it’s reported that EU officials are considering an unscheduled summit in November to conclude Brexit negotiations. It’s actually not news as the October summit is too tight while December one is too late to finalize all the parliamentary approvals.

Suggested reading on Brexit: The Real Meaning of “No Deal” Brexit

Swiss KOF dropped to 100.3, growth to hover around 10 year average

Swiss KOF Economic Barometer dropped 1.4 pts to 100.3 in August, below expectation of 101.2. KOF noted that it “pints to a level that is only marginally above its long-term average.” And, “in the near future Swiss growth should hover around its average over the last ten years.”

Also, it’s noted that “the strongest contributions to this negative result come from manufacturing, followed by the indicators from the exporting sector.” On the other hand, “the indicators related to private consumption give a positive signal. “. Financial and construction sectors were practically unchanged.

New Zealand ANZ business confidence tumbled by a further -5 pts in August to -50. Meanwhile, Activity Outlook was unchanged at 3.8. ANZ noted that “manufacturing is now the least confident sector – likely a lagged impact from construction sector woes”. On the other hand, The services sector is the most optimistic. Also “activity sub-indicators remain weak” and “threat to near-term activity is real.”

It’s a “particularly sharp turnaround” in the manufacturing sector from being the most optimistic in April, to the most pessimistic in August. Manufacturers’ export expectations are holding up. Thus, “this weakness is an echo of construction sector pessimism”. Employment intentions “continue to ease” and are weakest in “agriculture and construction sectors”. And, “it seems increasingly inevitable that wariness amongst firms will have real impacts, in the near term at least, as investment and employment decisions are deferred.”

USD/JPY retreats notably after hitting 111.82 and with 4 hour MACD crossed below signa line, intraday bias is turned neutral first. We’re holding on to the bullish case as long as 110.93 minor support holds. That is, correction from 113.17 should have completed at 109.76 already. On the upside, above 111.82 will target 112.14 resistance first. Break there should bring retest of 113.17 high. On the downside, however, break of 110.93 minor support will dampen the bullish case and turn focus back to 109.76 instead.