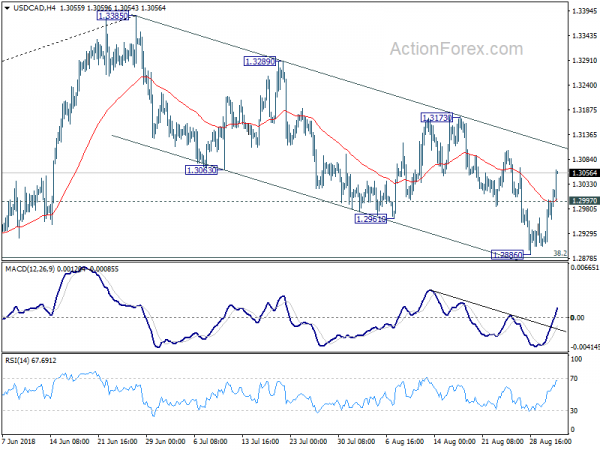 Trade war is back into the spot light today, sparkled by Trump’s Bloomberg interview with hostile comments on EU and China. Investor sentiments are clearly weighed down. At the time of writing, FTSE is down -0.58%, DAX down -0.75% and CAC down -1.04%. That followed broad based selling in Asian, with HK HSI down -0.98%, Shanghai SSE down -0.46%. Nikkei, though, was resilient and closed just down -0.02%.

Naturally, Yen and Swiss Franc are the strongest ones today on risk aversion. Dollar follows as the third strongest one, as it’s always stronger when trade tensions rises. Commodity currencies are broadly pressured with steep selling seen in Canadian Dollar in early US session.

Let’s not forget that today’s the the dead for Canada-US trade talk that Trump unilaterally, forcefully imposed. Words from officials have been positive on the talks up till yesterday. But a news report emerged today saying that the negotiations have turned sour. And a deal couldn’t be met by the end of the day. Let’s see.

Trump’s hostile rhetorics against the EU seem to have draw strong reactions from the latter. European Commission President Jean-Claude Juncker points to the “ceasefire agreement” with Trump made just a month ago, and said he hoped Trump will refrain from imposing auto tariffs. However, Juncker warned that the EU won’t let others dictate its own trade policies. And, if Trump violates the deal impose auto tariffs, the EU will “also do that”.

ECB Governing Council member Olli Rehn also urged Trump to stop the “regrettable” trade war rhetoric. And he warned that US exit from the WTO could damage international order. And he hit on Trump’s ungrounded claims and said ECB is certainly not manipulating the Euro. Rehn also defended China and said the Yuan is weaker because of trade war threat.

Another ECB Governing Council member Ewald Nowotny also said “the economic policy of the United States is currently one of the substantial risks to the global economy.” And he warned that unpredictable trade and economic policy, biased rulings in U.S. courts and the dominant role of the Dollar were bad for Europe. He added that there was an increasing interest for Europe “to free oneself from a one-sided dominance.”

In a Bloomberg interview, Trump rejected EU’s offer to scrap auto tariffs on cars if US does the same. He said “it’s not good enough” and added that “Their consumer habits are to buy their cars, not to buy our cars.” He also added that EU is “almost as bad as China, just smaller.”

UK Brexit Minister Dominic Raab and EU chief negotiator Michel Barnier are going to have a marathon six-hour session today. Raab said that he was “stubbornly optimistic” to reach a deal with the EU. He added that “valuable progress” was made but there is clearly “more work to do. And, he is “confident, if not more confident, now that a Brexit deal can be reached”.