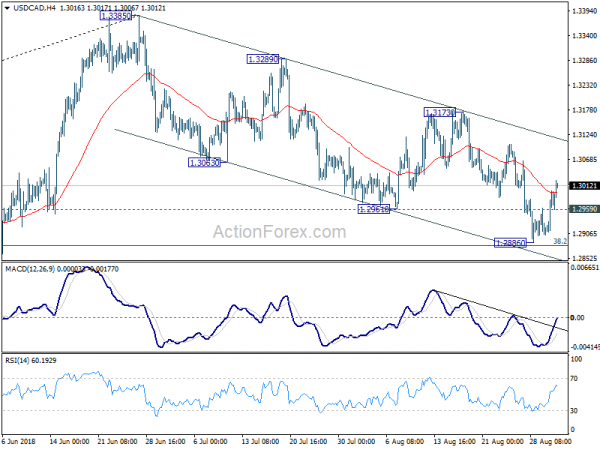 Canadian Dollar is trading as the weakest one for today, followed by New Zealand Dollar and then Australian Dollar. Asian stocks are under pressured broadly, following the pull back in US equities overnight. Investors seemed to be bother by the worsening tensions between US and China. Trade is definitely a concern as Trump sounded like he’s in not in the mood to back down in a Bloomberg interview. On the other hand, Swiss Franc is the strongest one so far, followed by Euro and then Sterling. Dollar is mixed.

While Australian and New Zealand Dollar have the own problems, the situation for Canadian Dollar is different. The 2.9% growth in Q2 GDP, while a miss, was certainly impressive. The trade negotiation between US and Canada is in progress even though there is no apparent breakthrough as the Friday deadline looms. But it should be remembered that the talks restarted on Tuesday right after US and Mexico made a deal. It’s tremendous for for Canada within a very short period of time. A deal, be it called NAFTA or something else, is still on track to be agreed. BoC is expected to hike again this year, and September or October doesn’t make a big difference. Hence, the Loonie’s weakness is likely temporary.

In other markets, Nikkei closed slightly lower by 0.02% at 22865.15. It still cannot find the needed momentum to get through 23050 key resistance. At the time of writing, China Shanghai SSE is down -0.32%, Hong Kong HSI down -0.99%, Singapore Strait Times is down -0.32%. Overnight, DOW lost -0.53%, S&P 500 declined -0.44% and NASDAQ dropped -0.26%. But it should be reminded that the decline in Asian stocks is result of loss of momentum in corrective rebound. The decline in US stocks is healthy retreat in an up trend. They’re vastly different. Gold breaches 1200 handle briefly but quickly recovered. Near term outlook in Gold stays bullish for another rise through 1214.

Trump complained in a Bloomberg interview that China is trying to devalue it’s currency, and his administration is studying whether to name China as a currency manipulator. Additionally, he’s looking into the “formula” for deciding who’s doing currency manipulation. Separately, it’s reported that Trump is ready to impose 25% tariffs on USD 200B in Chinese goods as soon as public hearing ends next week. And he told Bloomberg that, “we are a much stronger country,” and “nobody’s waiting us out. Our country is stronger than it’s ever been financially.”

At the same time, the People’s Bank of China set the reference rate stronger than estimates for 17 days in a row, to slow the Yuan’s decline. The currency’s fixing was 0.1% stronger than the average forecast in a Bloomberg survey. It’s a consensus among traders and analysts that the market doesn’t want to bet against PBoC for now, as the central bank and the government are ready to deploy further “manipulative” policies to support Yuan’s exchange rate and stabilize it.

Trump rejected EU’s offer to scrap auto tariffs on cars if US does the same. He said “it’s not good enough” and added that “Their consumer habits are to buy their cars, not to buy our cars.” He also added that EU is “almost as bad as China, just smaller.” European Commission President Jean-Claude Juncker responded today by warning that if US raise auto tariffs, EU will do the same.

European Trade Commissioner Cecilia Malmstrom told the European parliament yesterday that “we are willing to bring down even our car tariffs down to zero … if the U.S. does the same.” Nonetheless Malmstrom also expressed that “we do not agree with their methods of imposing massively billions of tariffs on China, as they have also done with Turkey. We do not share U.S. view that trade wars are good and easy to win.”

Canada Freeland: No agreement yet and trade talk with US to continue on Friday

Canadian Foreign Affairs Minister Chrystia Freeland had four meetings with US Trade Representative Robert Lighthizer yesterday, yet there was no conclusion in