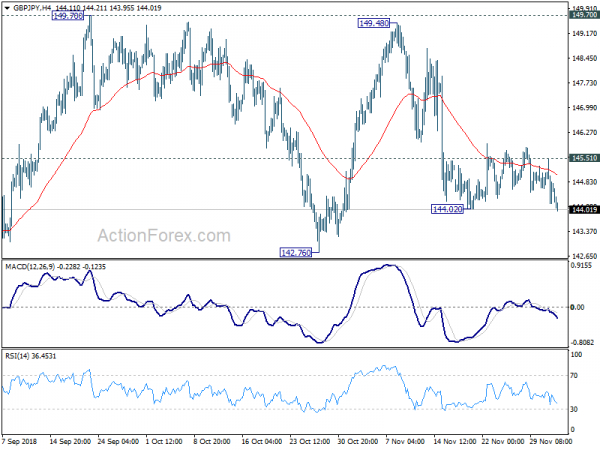 Yen jumps broadly today as Asian stocks weaken, moving past the positive catalyst of US-China trade truce quickly. Nikkei closed down -2.39%, more than enough to reverse Monday’s 1.00% gain. Additionally, 10 year JGB yield is down is down -0.010 at 0.073, comparing to October’s high at 0.162. There is notably some safe haven flows happening in Japan. Staying in the currency markets, New Zealand Dollar and Euro follow as the next strongest. Australian Dollar is mixed after RBA stands pat. Dollar is the weakest one, as also pressured by falling US yields. Canadian Dollar and Sterling are the next weakest.

Technically, Sterling’s weakness is worth most notice. GBP/USD breached 1.2725 yesterday and that’s a sign of near term bearishness. GBP/JPY is now kissing 114.02 support while EUR/GBP is also heading to 0.8939 resistance. Break of these levels will align Sterling’s bearish outlook in different pairs and we’d still more broad based selloff in the pound then. USD/JPY’s break of 113.18 suggests that fall from 114.03 is resuming towards 112.30 support next. Otherwise, major pairs are generally range bound.

The White House has confirmed that Trade Representative Robert Lighthizer will lead the new round of trade talks with China, taking over from Treasury Secretary Steven Mnuchin. This is an important indication that both sides (well mainly China), are ready to put promises into words and then actions. Lighthizer is the only one who knows how to work out a trade agreement. Without him, it’s just high level “talks”.

White House trade adviser Peter Navarro said that Lighthizer is “the toughest negotiator we’ve ever had at the USTR and he’s going to go chapter and verse and get tariffs down, non-tariff barriers down and end all these structural practices that prevent market access.”

Separately, White House economic advisor Larry Kudlow said China is going to work on the reforms promised “immediately”. Kudlow acknowledged that “The history here with China promises is not very good. And we know that.” However, Kudlow also said “President Xi has never been this involved”, which is a positive development to him. And he added, “we expect those tariffs to fall to zero.”

Kudlow, Mnuchin and Lighthizer held private meetings in Argentina with China’s Vice Premier Liu He. Kudlow said Liu promised that China will act quick on the commitments. And Kudlow added, “They cannot slow walk this, stall this, meander this. Their word: ‘immediately.’”

Fed chair Jerome Powell said in a speech that Fed has made “great deal of progress towards” a “strong economy and sound financial system”. He pointed to unemployment rate at 3.7% and strong job creation. And there are others signs of strength beyond the labor market. He noted the decline in financial hardship, wage gains, increased household wealth, and elevated consumer confidence.

However Powell also pointed to some “longer-term challenges”. Those include slow growth in wages for lower-income workers. Also, it’s unclear if recent pick up in productivity is a sustainable trend. And, aging population is limiting labor supply growth and potential growth. Decline in economic mobility also reflects the difficulty faced by lower-income Americans in moving up the economic ladder.

In a statement released today, the Eurogroup said Italy’s 2019 Draft Budget Plan (DBP) was breaking EU rules and urged Italy to rectify it.

It said “The Eurogroup recalls that in its opinion issued on 23 October 2018 the Commission identified a particularly serious non-compliance with the recommendation addressed to Italy by the Council on 13 July 2018 and requested a revised DBP. Italy submitted a revised DBP on 13 November, on which the Commission issued another opinion on 21 November, confirming the existence of a particularly serious non-compliance with the Council recommendation.”

Also, the Eurogroup noted that five member states’ DBP are “deemed to be at risk of non-compliance with the SGP”, including Belgium, France, Portugal, Slovenia and Spain.

Australian Dollar trades mildly firmer against dollar after RBA left cash rate unchanged at 1.50%. But it’s overall steady and mixed as reaction to RBA is rather muted. In short, RBA maintained that fall in unemployment rate will eventually lift inflation to target. But again, the central bank expected the progress to be “gradual”, implying that there is no urgency to lift interest rate any time soon.

On the economy, the central scenario for GDP growth is to average around 3.5% in 2018 and 2019. Then it would slow to 2020 due to slower growth in export of resources. Outlook for labor market remains “positive”. Improvement in the economy should see “some further lift in wages growth” over time, gradually. CPI is expected to pick up over the next couple of years gradually to. And, the central scenario if for inflation to be at 2.25% in 2019 and a bit higher in 2020.

GBP/JPY dips to 143.95 so far today and breach of 144.02 suggests fall resumption. Intraday bias is turned back to the downside for 142.76 support first. Break there will extend the decline from 149.48 to 139.29/47 key support zone. On the upside, break of 145.51 resistance is needed to indicate short term bottoming. Otherwise, outlook will remain cautiously bearish even in case of recovery.