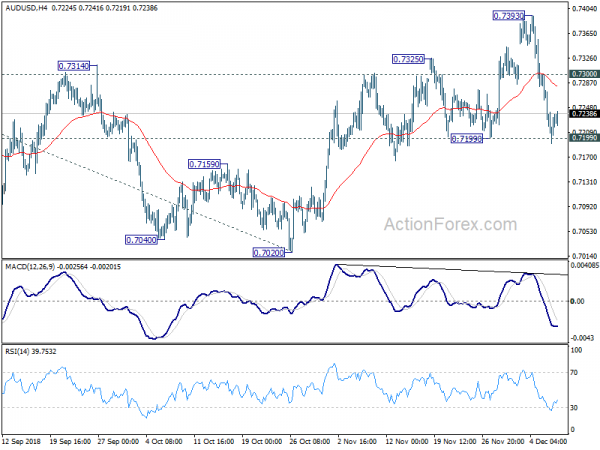 In the currency markets, Yen is trading as the weakest one for today, followed by Sterling and the Canadian. New Zealand Dollar is the strongest one for today, followed by Swiss Franc and then Australian. But for the week, Swiss Franc and Yen are overwhelmingly the strongest ones. Australian and Canadian are the weakest. The weekly picture is unlikely to change at close. Though, US non-farm payroll has the prospects to lift Dollar from the third weakest for the week to something better.

Technically, EUR/USD and GBP/USD are still bounded in familiar range. USD/CHF breached 0.9908 support overnight but recovered quickly. USD/JPY also breached 112.30 but then recovered. USD/JPY is indeed recovering further in Asian session. Thus, overall, there is no clear weakness in Dollar yet. Traders are just cautious ahead of NFP. Australian Dollar is digesting this week’s sharp losses. AUD/USD recovers after touching 0.7199. EUR/AUD retreats after touching 1.5871. These two levels will remain the focus for today.

Fed Powell: Some communities yet to feel full benefits of strong economy

Fed Chair Jerome Powell said in a speech yesterday that “by many national-level measures, our labor market is very strong.” However, he also noted that “aggregate statistics can mask important variations between different demographic and income groups, as well as significant regional differences.” He pointed to statistics indicating unemployment rates in some persistently poor rural counties remain much higher than the national figures.

And, “while the economy is strong overall, we recognize that some communities have yet to feel the full benefits of the ongoing expansion.” Fed is “conducting research, collaborating with communities, and assessing financial regulations so that our nation’s current prosperity will benefit small towns and cities alike.”

Fed Williams: Tariff is a negative for jobs

New York Fed John Williams said in a forum yesterday that the Trump’s tariff war with other countries have “relatively small effect on the economy. But they created higher uncertainty for businesses.

Williams said “at least so far the tariffs that have been put in place, by the United States and other countries, when you roll that up into a $20-trillion economy it doesn’t have a big effect overall on economic growth or inflation”. And, the “much more important and larger” effect is higher uncertainty for businesses. As companies put off investments due to the uncertainties, “that’s a negative for jobs in the short run…and a factor that slows the economy relative to what it could be.”

BoC Governor Stephen Poloz admitted yesterday that “data released since our October Monetary Policy Report have been on the disappointing side “. And, “the economy has less momentum going into the fourth quarter than we believed it would.”

Also, regarding recent oil price slump, Poloz added “it is already clear that a painful adjustment is developing for Western Canada and there will be a meaningful impact on the Canadian macroeconomy.”

The comments echo BoC’s cautious statement earlier this week and solidify the chance for BoC to pause its rate hikes if things don’t improve.

BoJ Governor Haruhiko Kuroda told the parliament today that “the economy is sustaining its momentum for achieving our 2 percent target. But that momentum lacks strength, so we will carefully watch developments.” For now, though, Kuroda added ” I don’t see the need to