Stocks could be set up for another violent week of selling 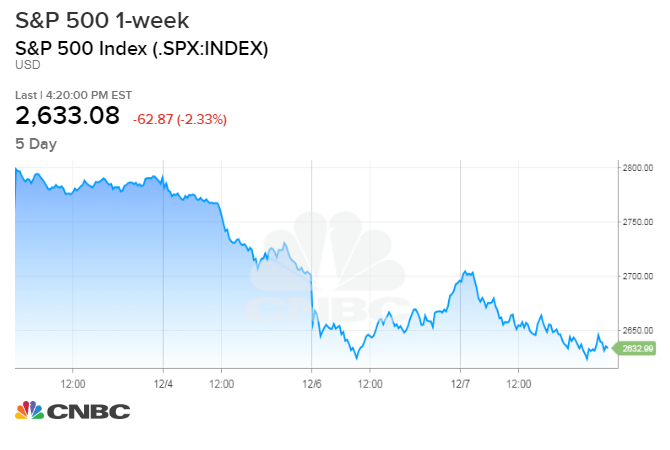 Stocks could continue to take a beating and aim for a retest of lows, after one of the most brutal weeks for the market this year.

As stocks melted down, bonds rallied, sending their own spooky message as the yield curve flattened and even inverted at some points — a sign of potential economic trouble ahead. The yield on the benchmark 10-year Treasury, which influences mortgages and other loans, started the week at 3.02 percent and was at 2.85 percent Friday, its biggest one-week move since October 2015.

There is some important data in the week ahead that the bond market will be focused on, including CPI inflation data Wednesday and November retail sales on Friday.

“I think we’re in a holding pattern, waiting to see if we get oversold on the S&P and look for some sort of oversold bounce, and I wouldn’t be surprised to see a lot of selling into that bounce until we get some substantive news, making investors feel confident. I think the market feels vulnerable,” said Sam Stovall, chief investment strategist at CFRA.

Investors have been fretting about uncertainty over U.S. trade relations with China, as well as the fact the economy looks to be growing more slowly. What appeared to be a promising meeting last weekend between President Donald Trump and Chinese President Xi Jinping sparked a one-day rally but gave way to skepticism and doubts especially after the arrest of a prominent Chinese telecom executive.

The Fed has been a big concern, but central bank officials seem to have been making a concerted effort to assure markets they will move cautiously, even if they raise interest rates this month, as expected. Fed Chairman Jerome Powell has said the Fed is close to neutral, the point where it can stop raising rates, and Fed Governor Lael Brainard was the latest Friday to emphasize that the central bank will be data dependent and make its rate decisions based on how the economy evolves.

Stovall said the market often touches a low point in mid-December, before taking off into year-end, but it’s not clear this year whether the market will right itself for much a year-end rally.

The S&P is sending some negative technical signals, and its chart formed a “death cross,” a technical pattern that suggests a bearish change in trend.

“The real question is are we headed for a global recession. That’s what I think the problem is, and I think that because the trade issue is so uncertain. That could end up being a pretty influential catalyst,” said Stovall. “Everyone keeps saying they’re worried about a recession in 2020. What if it ends up being 2019? On average, the S&P 500 tops out seven months before a recession. I don’t think we’re heading for a recession. I’m thinking this is a correction that will right itself, but until we get to breakeven the jury is still out.”

The stock market sell-off fits into a pattern the S&P 500 has experienced in 26 of the years since World War II. In those years, it dipped more than 5 percent and then fell again later in the year.

“In 70 percent of those observations, the second decline was deeper than the first,” Stovall said. The S&P fell 12.8 percent from late January to Feb. 9, and in October, it hit an intraday low of 2,603 that was 11.8 percent below its all-time high from September. It’s that low strategists say the market could retest in the near future. So if it is like the majority of years, there could be a deeper move.

“It does that because we need to reset the dial. We just didn’t reset the dial enough the first time around so we had to do it again. I was thinking a decline down to a pretty important support level like 2,550 on the S&P would be a decline threshold that would then be deeper than the first one,” he said. “It references the low, where we bounced in February of this year. It just gives me reason to think that that’s the kind of decline we could get.”

Scott Redler, partner at T3Live.com, said Apple helped add to the negative sentiment, losing its gains for the year in Friday’s trading, and the rest of tech was also a negative.

“There’s not much to stay positive about but there was really no reason to sell off. There was no shock move, there was just a weak tape [Friday],” said Redler. He said even with some positive comments from the White House on trade and a decent employment report, the market still could not rally.

Redler said he expects the S&P 500 to break the November low and test the October intraday low of 2,603 in the week ahead.

Ari Wald, technical analyst at Oppenheimer, said he also sees a retest of lows coming, but the market is getting oversold. “We’re due for a bounce,” he said. “Risk assets face formidable resistance on the way back up. I think it’s going to face significant problems in 2019. I think there’s a ceiling out there.”

In the bond market, strategists expect buying to continue, especially with the sell off in stocks. Bond yields move opposite price.

“I think (the 10-year) could dip below 2.80 percent,” said Ian Lyngen, head of U.S. rate strategy at BMO. Lyngen said the market is watching inflation to see if it shows signs of weakening as some expect. Core CPI is expected to rise 2.2 percent year over year.

Retail sales are expected to rise by 0.2 percent.

“I think the combination of those two all-important headline data points are going to further confirm a soft patch in the real economic data or we’re going to see a challenge to the notion that the Fed has gone too far too fast,” he said.

If the data misses the mark, it could continue to pressure the long end of the curve — or the 10-year note and 30-year bond. The 2-year to 10-year spread is the most widely watched, and the two yields edged closer together in the past week, reaching just 9 basis points Thursday. If they invert, with the 2-year yield moving above the 10-year, that would be taken as a recession warning.