Pound Tumbles as UK PM May Will Call off Brexit Parliamentary Vote, Abruptly 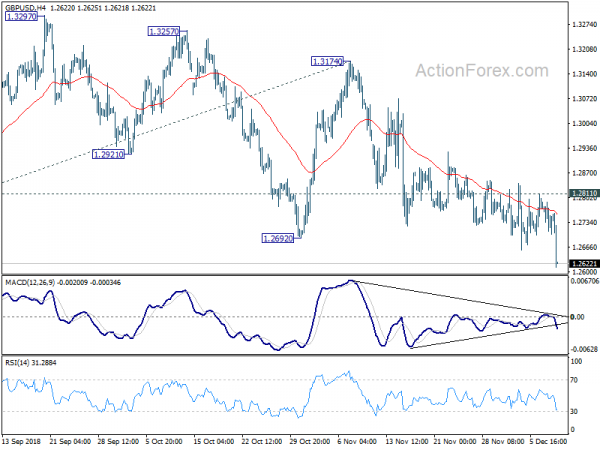 Pound is at the center of focus today as it finally shows some commitment on the downside. The trigger of the selloff is report that UK Prime Minister Theresa May is going to call off tomorrow’s Brexit parliamentary vote. Weak economic data of course also add to the pressure of the Pound. At this point, Sterling is overwhelmingly the weakest one for today, followed by Yen, and then Canadian. New Zealand Dollar is the strongest one so far. Euro shrugs off poor investor confidence data and follows as second strongest, thanks to rally to EUR/GBP.

Technically, GBP/USD’s break of 1.2661 key support now indicates medium term down trend resumption. EUR/GBP is heading to 0.9098 and break will put focus on 0.9305 high. GBP/JPY also breaks 142.76 support and is now on track to 139.88 key support. The forex markets are rather steady elsewhere though. Dollar trades a touch weaker against Euro and Swiss Franc but there is no follow through selling. The greenback is also bounded in familiar range against Aussie and Canadian.

May to call off tomorrow’s Brexit vote, to make a statement at 1530GMT.

It’s reported that May has abruptly called off tomorrow’s parliamentary vote on her Brexit deal. There is no confirmation yet but the news is widely reported and not denied. May is set to make a statement later at 1530GMT.

Scotland’s First Minister Nicola Sturgeon criticized that “this is a watershed moment and an act of pathetic cowardice by a Tory government which has run out of road and is now collapsing into utter chaos”. She added that “the Prime Minister’s deal should come before the (UK parliament) immediately so that it can be voted down and we can replace Tory chaos with a solution that will protect jobs, living standards and Scotland’s place in Europe.”

Northern Irish DUP deputy leader Nigel Dodds said “If anyone needs any further lesson or demonstration on how not to negotiate, look at the shambles today of the government in the House of Commons having to pull a vote on something that they said was the only way forward.”

Opposition Labor Party leader Jeremy Corbyn said “The government has decided Theresa May’s Brexit deal is so disastrous that it has taken the desperate step of delaying its own vote at the eleventh hour”. And, “We don’t have a functioning government … Labour’s alternative plan for a jobs first deal must take centre stage in any future talks with Brussels.”

As widely expected, the European Court of Justice finally ruled today that “the United Kingdom is free to revoke unilaterally the notification of its intention to withdraw from the EU.” And, “Such a revocation, decided in accordance with its own national constitutional requirements, would have the effect that the United Kingdom remains in the EU under terms that are unchanged as regards its status as a Member State.

Separately, European Commission Jean-Claude Juncker talked with May over night weekend. His spokeswoman reiterated the position that “we have an agreement on the table” and “we will not renegotiate”, regarding Brexit deal. And, She added that European Union is ready for “all scenarios” of Brexit.

Some volatility is seen in Sterling in early part of European session. It firstly declined against Euro, then was limited mildly by ECJ’s ruling on Brexit revocation. But overall movements are limited and not even a batch of weak economic data was economy to kick the Pound out of range.

UK GDP rose 0.1% mom in October, matched expectations. For the rolling three months Aug to Oct, growth to 0.4%, down from 0.6% from Jul to Sep. The slow down was even more noticeable, comparing to 0.7% recorded in both May to Jul and Jun to Aug periods. Services was the biggest contributor to growth in the Aug to Oct period, up 0.23%. Production rose merely 0.05% while construction rose 0.08%.

Also from UK, industrial production dropped -0.6% mom, -0.8% yoy in October versus expectation of