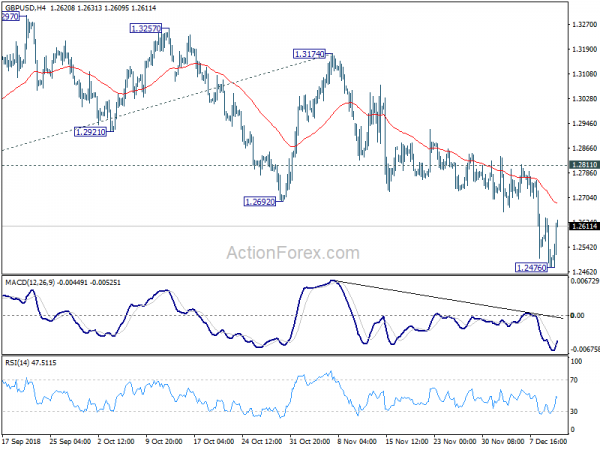 The UK is in the center of focus again today. Now the time has come for a leadership challenge on UK Prime Minister Theresa May. Sterling gains a lot of round as it looks like May could survive this big test for her Brexit deal. The Pound is so far trading as the strongest one for today., followed by Euro, and then Canadian. On the other hand, New Zealand Dollar is the weakest one, walking its own path. Yen and Swiss Franc are also soft on improving risk sentiments. US and China are making progresses on trade war. Dollar also turns slightly weaker after consumer inflation data.

Technically, GBP/USD and GBP/JPY should have formed temporary bottoms and EUR/GBP formed temporary top. There is some upside potential in Sterling, for the nearest term. But then, there is no indication of bullish reversal yet, and it could come back under pressure quickly. While Dollar trades lower, EUR/USD, USD/CHF, AUD/USD and USD/CAD are trading familiar range. Some more is needed to indicate Dollar’s near term weakness.

No-confidence vote triggered, UK PM May pledged to fight with everything she got

Sterling receive strong support today, the same as May who is now facing no-confidence vote within hours. In particular BC editor Laura Kuenssberg‏ tweeted that 158 Tory MPs have now said they will back May tonight. And that should be enough for her to win. Reuters also reported that at least 150 Conservative MPs have indicated support for May. 158 of 315 lawmakers are needed to secure May’s seat, theoretically. But the actual number will be slightly lower than that. And should May really wins, there’s a bigger chance for her to secure the needed tweaks, or “clarifications” from the EU, to come back and get the Brexit deal through the Commons.

Earlier today, Graham Brady, chair of the 1922 Committee, has received at least 48 letters from Conservative PMs for a confidence vote on May. The’s over 15% threshold for triggering the request. A ballot will now be held today between 1800 to 2000 GMT today. Brady didn’t put a firm number of the votes needed to oust May. Instead, he said he needed to see the full electoral lists to determine. Meanwhile, he expected to results to come out at around 2100GMT.

In a rather quick response, May pledged to contest the no-confidence vote with “everything I have got”. She believed the deal with EU is “attainable”. And she warned that a change of leadership in the Conservative now will “put the future of our country at risk and create uncertainty we can least afford it”. And she also warned that a change of leadership now would “hand the control of the Brexit negotiation to opposition MPs”. And the new leader will have to extend or rescind article 50, “delaying or even stopping ” Brexit.

Separately, European Council President Donald Tusk said in a letter to EU27 leaders that May would brief the other leaders before dinner on the EU summit on Thursday. And then, May would leave the leaders to “adopt Brexit conclusions. The EU27 leaders will discuss their preparations for no-deal Brexit.

US CPI slowed to 2.2%, Fed still on track for hike next week

Dollar dips mildly after US inflation data. Headline CPI slowed notably to 2.2% yoy in November, down from 2.2%. On the other hand, core CPI rose to 2.2%, up from 2.1% yoy. Both matched market expectations. Headline CPI peaked at 2.9% earlier in June while core CPI peaked at 2.4% in July. For now, Fed is still widely expected to raise interest rate again next week, and most likely another one in March. But diminishing upside pressure in inflation could start to tie Fed’s hand beyond March 2019.