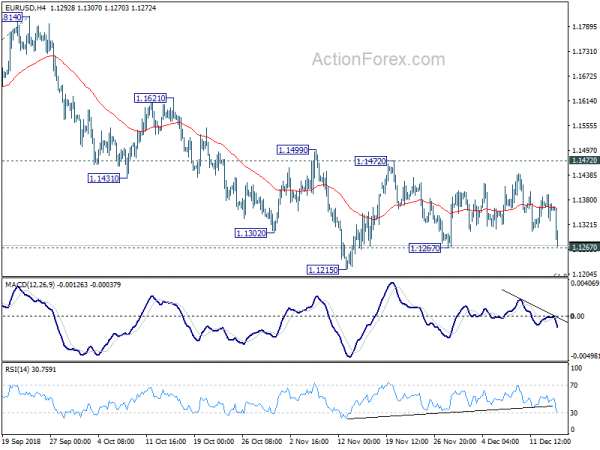 Yen and Dollar are the strongest ones today as global stock markets are back in selloff mode. Sentiments turned sour after weaker than expected Chinese sales and production data. Adding to that, Eurozone came showed further decline in growth momentum, verifying ECB’s concerns. China’s concessions on retaliation tariffs on US autos are a positive news, but couldn’t turn things around.

Dollar is gaining a bit extra advantage after slightly better than expected retail sales data. But that’s just a matter of 0.2% growth versus 0.1%. DOW futures are pointing to lower open, and we’ll see if selling would intensify onwards. Staying in the currency markets, New Zealand and Australian Dollar are the weakest ones on risk aversion naturally, in particular on Asian slowdown. Sterling is the third weakest today on Brexit worries. Euro isn’t too far away though.

Technically, AUD/USD is finally moving away from 0.7199 support, confirming near term reversal. Retest on 0.7020 low should be seen next. Steep selloff is seen in EUR/USD and EUR/JPY and they are likely having downside breakout finally. 1.1267 support and 124.79 support should be watched closely to confirm.

China Ministry of Finance announced to suspend retaliation tariffs on US autos and parts for 30 days, as a result of the meeting between Xi and Trump in Argentina. The statement noted that important consensus was reached between the two heads of state. And in order to implement the consensus, China will suspend the additional tariffs imposed this year on 211 items for three months from January 1 to March 31, 2019. The lists include 25% tariffs on 28 items in list 1, 25% tariffs on 116 items in list 2, and 5% tariffs on 67 items in list 3.

Chris Williamson, Chief Business Economist at IHS Markit said in the release that “While some of the slowdown reflected disruptions to business and travel arising from the ‘yellow vest’ protests in France, the weaker picture also reflects growing evidence that the underlying rate of economic growth has slowed across the euro area as a whole.”

And, “While GDP growth in the fourth quarter as a whole is indicated at almost 0.3%, the surveys point to quarterly GDP growth momentum slipping closer to 0.1% in December alone. Forward-looking indicators such as new orders and future expectations remaining subdued suggest that demand growth is stalling, adding to downside risks to the immediate outlook.

ECB Vice President Luis de Guindos defended the central bank’s decision to ended the asset purchase program this month, without any further stimulus exit said. He said that “We’re in a dark room that sometimes gets a bit darker, and when you are in a dark room you have to be very cautious and try to keep your optionality at the maximum level,”