Yen Trading Higher as Risk Aversion Spreads from US 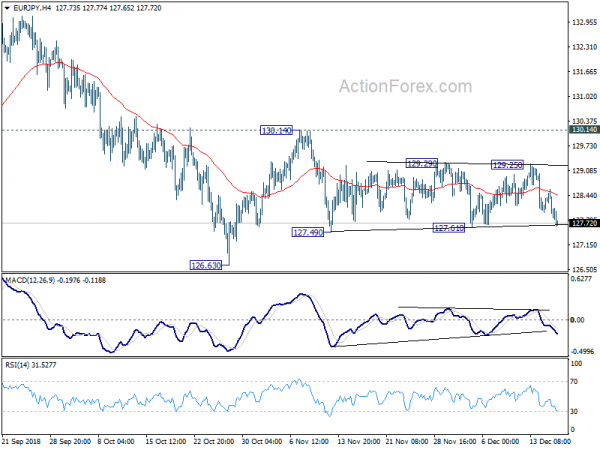 Yen is trading as the second strongest one for today, next to New Zealand Dollar, as risk aversions spread from the US to Asia. There were continuous rhetorics from Trump’s administration against Fed’s rate hikes. But the fact that Dollar and yields are weak argues that the free fall in stocks is due to some more fundamental challenges of the economy. And there has been clear flow from stocks to bonds in the US, Germany and Japan. Investors are clearly worried about a global slowdown. For today, Euro is the weakest one, followed by Dollar and Swiss Franc.

Technically, EUR/JPY is now pressing 127.61 support and break there will at least bring a retest on 126.63 support, with prospect of resuming recent decline from 133.12 to 124.89 support next. USD/CHF is also eyeing 0.9911 minor support and break will likely resume choppy correction from 1.0128 for 0.9862 low again. AUD/USD might now consolidate above 0.7153 temporary low but outlook will stay bearish as long as 0.7246 minor resistance holds. EUR/USD, GBP/USD and USD/CAD are staying in consolidation in familiar range.

White House trade advisor Peter Navarro said Fed shouldn’t raise interest rate, even this week. He said it’s “not because the economy’s slowing down, but because the economy’s growing without inflation”. Trump also blast Fed for “even considering yet another interest rate hike”. Whether Fed should or shouldn’t continue with rate hike is one question, they’ve got enough seasoned economists there to make their own judgement. But noting that Dollar and yield declined, there is apparently no linkage between Fed’s hike to the stock market crash.

Minutes of the December 4 RBA meeting maintained the same tone that “the next move in the cash rate was more likely to be an increase than a decrease”. But at the same time “there was no strong case for a near-term adjustment in monetary policy”.

For RBA, the “central scenario remained for steady growth in consumption, supported by continued strength in labour market conditions and a gradual pick-up in wages growth”. Also, “further falls in the unemployment rate were likely”. But it should be emphasized that was based on “expectation that the economy would continue to grow above trend”.

Also, the meeting took place before release of Q3 GDP, which showed merely 2.8%. That’s clearly lower than RBA’s own projection of 2.0%. And 2.8% could merely be described as being around trend, not above trend. Thus there is prospect of a dovish shift in RBA’s upcoming forecast in February Monetary Policy Statement.

Japan Cabinet Office lowered fiscal 2018 and 2019 growth forecast notably in the new economic projections. The move was due to impact from natural disaster as well as increasing downside risks from US-China trade war. Inflation forecasts was also revised lower. Though, private consumption is expected to pick up down the road, providing a bright spot.

China Xi pledged reform and open up markets, with no specifics

At the 40th anniversary of market liberalization, Chinese President Xi Jinping used one and a half hour to delivered some high level promises but failed to deliver any specifics. He said “we must, unswervingly, reinforce the development of the state economy while, unswervingly, encouraging, supporting and guiding the development of the non-state economy”.

He added that “Every step of reform and opening up is not easy. In the future, we will be inevitably faced with all sorts of risks and challenges, and even unimaginable tempestuous storms.” But he also emphasized that “opening brings progress while closure leads to backwardness.”

UK Prime Minister Theresa May told the parliament yesterday that her Brexit agreement is “not everyone’s perfect deal” but a “compromise”. But she warned that “if we let the perfect be the enemy of the good then we risk leaving the EU with no deal”. And she emphasized that “avoiding no deal is only possible if we can reach an agreement or if we abandon Brexit entirely.” She al repeated that EU had offered “further clarifications” on the Irish backstop and she’s seeking “further political and legal assurances”. On the timing of the vote, May said debate on the Brexit deal with resume in the week beginning Monday January 7. Vote will be held in the following week, that is, the week beginning January 14.

Opposition Labor leader Jeremy Corbyn lodged a motion of no-confidence in May for delaying the Brexit deal vote as “this is unacceptable in any way whatsoever”. Corbyn also criticized May as the architect of a constitutional crisis, “leading the most shambolic and chaotic government in modern British history”. But the results of such vote would be non-binding, even if it takes place.

New Zealand ANZ Business Confidence rose to -24.1 in December, up from -37.1. Looking ahead, Germany Ifo business climate is the main focus in European session. Later in the day, Canada will release manufacturing sales. US will release housing starts and building permits.