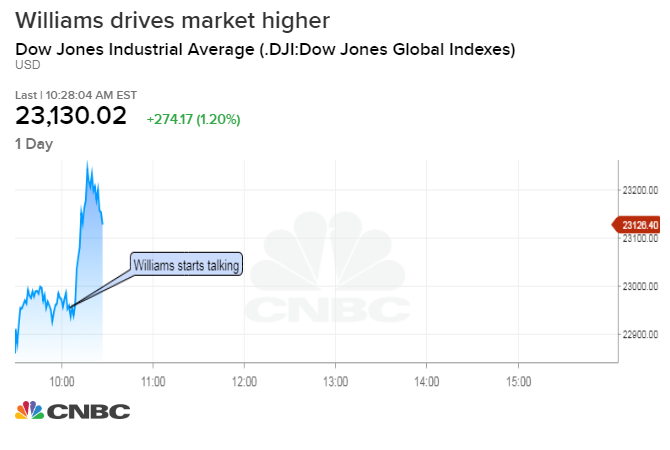 Federal Reserve Bank of New York President John Williams told CNBC on Friday the Fed is open to reconsidering its views on rate hikes next year.

“We are listening, there are risks to that outlook that maybe the economy will slow further,” Williams told Steve Liesman during an interview on “Squawk on the Street.”

Williams said despite this week’s forecasts, the central bank is not “sitting there saying we know for sure what’s going to happen” in 2019.

“What we’re going to be doing going into next year is reassessing our views on the economy, listening to not only markets but everybody that we talk to, looking at all the data and being ready to reassess and re-evaluate our views,” he said.

The market jumped after Williams signaled more willingness for the Fed to rethink rate hikes and its balance sheet policy. Stocks jumped 350 points after the interview.

Investors were focused on Fed Chairman Jerome Powell’s comments on Wednesday that the balance sheet reduction program is going well and will proceed as planned. Right now, the Fed is allowing $50 billion a month to run off the balance sheet, which is mostly a portfolio of bonds the central bank purchased to stimulate the economy during and after the financial crisis.

“We did not make a decision to change the balance sheet normalization right now, but as I said, we’re going to go into the new year with eyes wide open, willing to read the data, and reassess the economic outlook and take the right policy decisions,” Williams told CNBC.

Williams said the Fed could could rethink those the two hikes.

“Things can change between now and next year,” he said. “Something like two rate increases would make sense in a really strong economy going forward. But we’re data dependent, we’re going to adjust our views dependent on how the outlook changes.”

Powell also left the door open to other options next year. He emphasized “data dependency” on Wednesday and said if data do not hold up in 2019, the Fed may change course.

Markets stumbled up and down after the decision Wednesday, then ultimately turned negative during Powell’s news conference. Major equity indexes have moved into correction territory and are mostly negative for the year.

“The Fed wants to shrink that balance sheet, they know it’s big, it hamstrings them in the next downturn,” Peter Boockvar, chief investment officer at Bleakley Advisory Group, told CNBC. “The market knows it’s a steady drip liquidity drain every month.”

The Fed is also dealing with repeatedly criticism from President Donald Trump. On Monday, Trump said “it is incredible” that “the Fed is even considering yet another interest rate hike.”

— CNBC’s Jeff Cox and Patti Domm contributed to this report.