Risk Aversion Eased ahead of Holiday, But Yen Remains Strongest 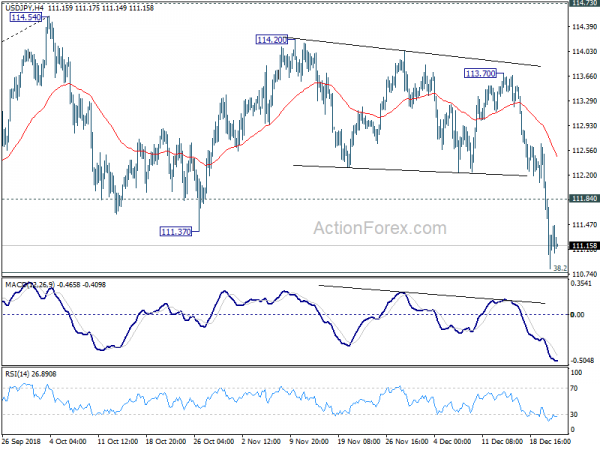 Yen remains the strongest one for today even though risk aversion eased a bit ahead of long holiday weekend. Dollar is following as the second strongest, reversing a lot of post FOMC losses against Euro and Swiss Franc. Commodity currencies remain generally weak. But today, it’s Canadian Dollar that’s leading the way down. Stronger than expected Canada GDP data provided little help. The Loonie follows WTI crude oil lower, as the latter is now risking 45 handle.

Technically, EUR/JPY is showing sign of downside acceleration and should have a take on 126.63 support soon. But for now, USD/JPY is holding on to 110.75 key fibonacci level and consolidates in tight range around 111.20. The development has actually dragged down EUR/USD. But EUR/USD is holding above 1.1364 minor support, so further rise remains mildly in favor.

US Q3 GDP revised down to 3.4%, ex-transport durable orders contracted

UK Q3 GDP growth was finalized at 0.6% qoq, unrevised. Annually, GDP grew 1.5% yoy, revised up by 0.1%. ONS noted that “services remained the strongest contributor to growth in the output approach to GDP in Quarter 3 2018, with growth easing slightly from the previous quarter; construction and manufacturing also contributed positively to growth.”

At the same time, ONS also said “In comparison with the same quarter a year ago, the UK economy has grown by an unrevised 1.5%. This is a slight pickup from previous quarters in the year, although the longer-term picture remains one of relatively subdued growth compared with historic standards”

From German, Gfk consumer sentiment was unchanged at 10.4 in January.

Of the JPY 101.5T, around JPY 2T will be spent specifically to ease the impact from the planned sales tax hike in October 2019, from 8% to 10%. Measures will include shopping vouchers to help low income households.

However, stimulus measures will altogether hit JPY 6.5T, far exceeding the estimated increase in sale tax revenue. Some economists noted that Abe has now set the precedence that rise in tax would actually be delaying fiscal reform.

Nevertheless, Finance Minister Taro Aso emphasized that “we were able to manage both needs of economic revival and fiscal consolidation with this budget.”

Released from Japan, national CPI core slowed to 0.9% yoy in November, down from 1.0% yoy and missed expectation of 1.0% yoy.