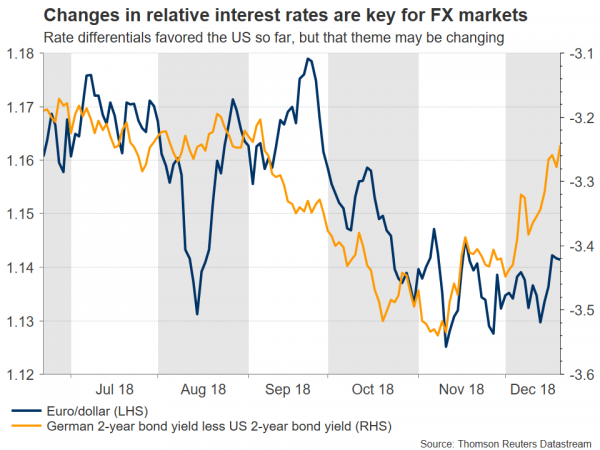 As 2018 draws to a close, the heavily sold currencies are set to end the year off their lows, while the US dollar – one of the biggest winners of 2018 – appears on track to start 2019 on a negative footing. While it’s too early to predict a new downtrend for the dollar, expectations that US interest rates are nearing their cycle peak could provide the greenback’s peers some much-needed relief. Yet, several risks remain – ranging from the Sino-US trade war to Brexit to a global economic slowdown – so any decline in the US currency may be limited should the latest bout of risk aversion linger.

Are the days of “king dollar” behind us?

Following a year of broad dollar strength – due to widening interest rate differentials, the US economy outperforming, and investors often seeking the reserve currency’s safety – the risks surrounding the greenback in 2019 may be tilted to the downside. The Fed is now approaching “terminal” rates at a period when other central banks are preparing to start their own tightening cycles. Hence, the monetary policy divergence theme may have largely run its course, and the dollar’s carry appeal could gradually lessen.

Separately, although markets have turned a blind eye lately, attention may soon shift back to the twin fiscal and current account deficits as well as the nation’s unsustainable debt trajectory. Political gridlock in Washington and the occasional threat of a government shutdown could also haunt the US currency.

Note two upside risks, though. A collapse in the US-China trade talks that gives way to a re-escalation in tensions, may see the greenback attract safe-haven bids. Likewise, if the US launches a massive infrastructure program that lifts economic growth and inflation, it could be a game-changer.

Despite starting 2018 on a strong note, the euro’s gains quickly evaporated, and the currency is set to close the year much lower amid cautious forward guidance by the ECB, slowing economic momentum, Italian and Brexit risks, as well as global trade worries. While things currently don’t look good for the common currency, better days may lie ahead. The Italian crisis seems to be subsiding, and more importantly, the ECB is preparing to lift rates late next year.

Markets still haven’t priced in much tightening by the ECB. This suggests the euro has lots of room to run higher if economic data pick up some steam again and allow the Bank to ‘take the next step’, especially since the Fed will be near “peak” rates by then. A potential euro comeback may also be amplified by an unwinding of heavy speculative net-short positions. The obvious risk is that the data don’t recover, leading the ECB to delay its tightening plans. A disorderly Brexit could also derail any euro rebound.

Delivering Brexit will be the British government’s top priority in 2019, and hence the primary driver for the pound. In mid-January, the deal agreed between Theresa May and the EU will head to the UK Parliament for a vote, where it may only pass if it contains strong assurances the Irish backstop will indeed be temporary, potentially lifting the pound towards the key $1.3300 resistance. Alternatively, a rejection could increase calls for a second referendum, simultaneously postponing the exit date scheduled for March 29.

Otherwise, the UK may leave without a deal, creating chaos in the UK economy, with May likely facing another leadership challenge – this time from opposition parties. Consequently, traders would probably see the pound revisiting the 1.2000 area.

On the monetary policy front, the Bank of England said a disorderly exit could cause a devastating recession, hence rate hikes would be off the table in this case. If, however, May persuades the EU to make further concessions that appease British lawmakers, and if the data allows, then the Bank could even deliver more than one hike next year.

Yen traders not holding their breath for BoJ normalization

The Japanese economy remains stuck in “low gear”, which has kept the BoJ from considering any major changes to its massive stimulus program. Consequently, the defensive yen has been trading mainly as a function of global risk appetite, paying little attention to economic data.

Although market chatter suggests the BoJ could start normalizing next year, that prospect remains remote. The economy contracted in Q3, underlying inflation is muted, and the government plans to raise the consumption tax in October 2019. The last time it hiked this tax, a recession ensued, so the BoJ will probably avoid any bold moves ahead of it. Hence, rate differentials between Japan and other economies may stay wide or widen further, which in isolation argues for a weaker yen over time. For the currency to soar, it may require an unexpected pickup in inflation, or more realistically, a sustained period of global risk aversion.

Franc stuck in the shadow of the ECB

For the franc, the most important drivers will be the SNB’s policy stance, and safe-haven flows. The SNB seems unlikely to dare making a hawkish turn anytime soon; Swiss data continue to tread water and the Bank will probably want to avoid tightening its policy in any manner before the ECB does, for fear of a drastic franc appreciation. Hence, absent some major deterioration in risk sentiment that generates haven-demand for the Swiss currency, the risks surrounding euro/franc may be skewed to the upside over the coming year, as markets increasingly price in ECB normalization prior to the SNB’s.

Loonie, aussie, and kiwi in the eye of the US-China trade storm

The loonie, aussie, and kiwi all had a difficult time in 2018 amid struggling commodity prices, a resurgent US dollar, and most importantly, flaring trade tensions between the US and China. Given that these economies (Canada, Australia, New Zealand) are heavily export-oriented, dwindling global trade volumes could impact them severely. For the loonie, collapsing oil prices were crucial too.

Does 2019 promise to be any better? That may depend predominantly on whether the US-China trade negotiations ultimately bear fruit, or fall apart. In terms of monetary policy, no rate hike is expected by either the RBA or RBNZ, and in fact, market pricing implies a small probability for a rate cut (~20%) by both amid slowing growth. Meanwhile, half a 25bps rate increase is priced in by the BoC, which seems overly dovish and assuming even a mild recovery in oil prices, argues for a firmer loonie.