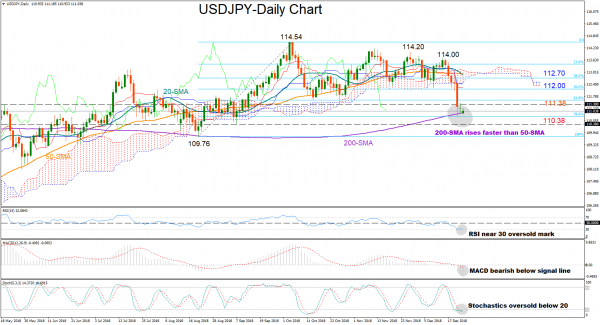 USDJPY closed marginally above the 200-day simple moving average (MA) last week, marking its second worst weekly performance for this year. With the RSI moving around its 30 oversold threshold and the Stochastics being ready to post a bullish cross below 20, a rebound could take place in the coming sessions, though the MACD suggests that bearish forces will dominate in the short term as the indicator continues to strengthen to the downside and below its red signal line.

Alternatively, if the price manages to drop below the 200-day MA currently at 111, traders could unlock additional selling orders, driving the market probably down to 110.38. Even lower, the way could open towards the 109.76 bottom where the market strongly rebounded in August.

Turning to the medium-term picture, the outlook remains neutral as long as the price holds within the 109.76-114.54 range. However, it’s worth noting that the 200-day MA has already started to curve up to meet the 50-day MA which looks to be losing steam, a sign that the market may soon resume its bearish profile.

Summarizing, USDJPY holds a negative bias in the short term, while in the medium-term the pair is neutral.