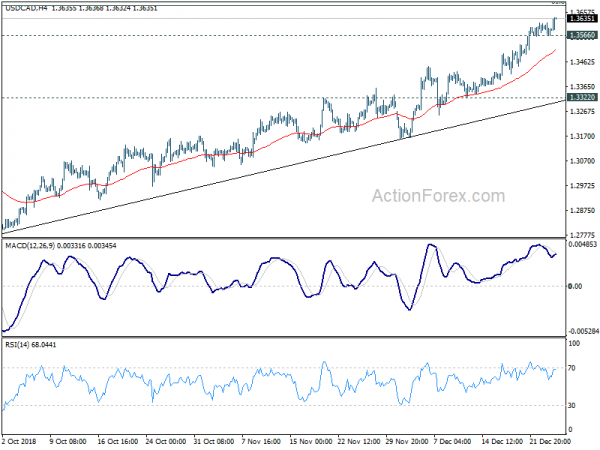 While the US markets staged an historic comeback yesterday, sentiments didn’t stay long. After Asian markets turned mixed, European markets are now trading broadly lower. DOW’s over 1000pts rebound yesterday was impressive. But futures suggest that it’s going to give back 300pts or more at open. Swiss Franc and Japanese Yen are currently taking turns to be the strongest ones as markets are back in risk averse mode. Australian, New Zealand and Canadian Dollar are the weakest ones. Dollar and Euro are mixed.

Technically, USD/CAD’s rally extends today and seems to be picking up upside momentum again. It’s on track to 1.3685 fibonacci level next. AUD/USD is staying in tight range but could resume recent decline soon. EUR/JPY and GBP/JPY are staying in consolidation but that should be relatively brief before decline resumption. The bigger question is the time for EUR/USD, GBP/USD and USD/CHF to finally have a breakout from range.

In the Monthly Bulletin released today, ECB warned that “signs of moderating momentum are emerging” in the global economy. And “activity is expected to decelerate in 2019 and remain steady thereafter.” And that “reflects the projected cyclical slowdown across advanced economies and in China.”

The central bank also noted that “The intensification of trade tensions between the United States and China should weigh on activity in both countries. While the global impact is still judged to be relatively limited, heightened uncertainty about future trade relations may adversely affect confidence and investment.”

ECB added that “While the temporary truce between the United States and China sent a positive signal, there remains considerable uncertainty as to whether the talks will lead to a significant de-escalation of US-China trade tensions.”

Nevertheless, ECB also said “All in all, the recent slowdown in growth has not, thus far, called into question the fundamentals of the current economic expansion.”

China accelerating laws on IP protection, face-to-face meeting with US in Jan

China is accelerating legislation to protect intellectual property rights of foreign investments. Draft laws has been submitted to the Standing Committee of the National People’s Congress for first review. Strong wordings were used in the draft like “official authorities and their staff shall not use administrative means to force the transfer of technology.” The Committee will being a session on Sunday and then hold “public” consultations until February 24.

China’s Ministry of Commerce spokesman Gao Feng said today that there are plans for face-to-face meeting with the US over trade in January. In the mean time, “intensive” phone calls are on-going despite the Christmas break. Separately, Bloomberg reported that a US delegation will travel to Beijing in the week of January 7. Deputy U.S. Trade Representative Jeffrey Gerrish will lead the Trump administration’s team, including Treasury Undersecretary for International Affairs David Malpass.

Reuters reported, citing three unnamed sources, that Trump is considering to sign an executive order as early as in January to indirectly limit US companies purchases of equipment from China’s tech giants Huawei and ZTE. The executive order could invoke the so called International Emergency Economic Powers Act that gives the president authority to regulate companies on national securities ground. It’s believed that, though, Huawei or ZTE wouldn’t be directly named.

China’s Foreign Ministry spokesperson Hua Chunying declined to comment on the order. But she said “it’s best to let facts speak for themselves when it comes to security problems.” She added, “some countries have, without any evidence, and making use of national security, tacitly assumed crimes to politicize, and even obstruct and restrict, normal technology exchange activities.” And, “this in reality is undoubtedly shutting oneself off, rather than being the door to openness, progress and fairness.”

USD/CAD’s rally continues today and reaches as high as 1.3639 so far. Intraday bias remains on the upside for 1.3685 fibonacci level next. Break there will target 1.3793 key medium term resistance. On the downside, below 1.3566 minor support will turn intraday bias neutral and bring consolidations. But downside should be contained above 1.3322 support to bring another rally.