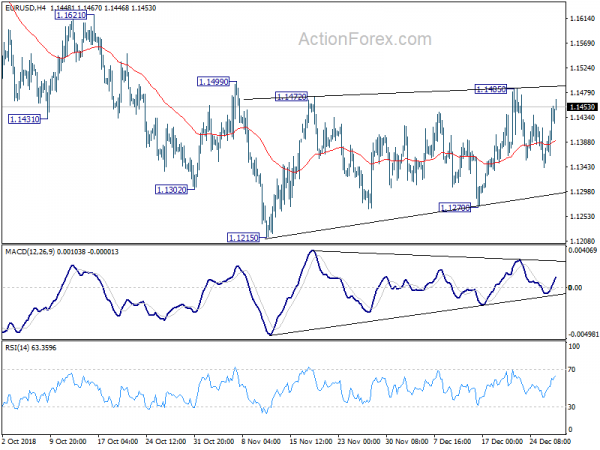 Despite initial setback, US equities extended the post-Christmas historic rebound overnight. DOW ended up 1.14% to 23138.82. S&P 500 rose 0.86% and NASDAQ added 0.38%. But the improvement in sentiments isn’t carried over to Asian session. Nikkei is currently down -0.39%. Hong Hong HSI is just up 0.09% while China Shanghai SSE is up 0.15%. Singapore Strait Times is the better performing one and is up 0.73%. In the currency markets, Dollar is trading as the weakest one for today, followed by Canadian. On the other hand, Yen is so far the strongest one, followed by Swiss Franc. But major pairs and crosses generally held in yesterday’s range.

Technically, AUD/USD and USD/CAD extended recent move but are both losing momentum. Dollar might start to top against the two. Also, EUR/USD will possibly challenge 1.1485 resistance today. USD/CHF is pressing 0.9848 key support again. There is prospect of some Dollar weakness before year-end. Yen crosses, including USD/JPY, EUR/JPY and GBP/JPY are staying in consolidation, with EUR/JPY being the stronger one. But recent decline in these Yen crosses are still expected to resume sooner rather than later.

There is no end in sight to the partial US government shutdown as it enters in the the sixth day. Trump continued to blame the Democrats for “OBSTRUCTION of the desperately needed Wall”. White House spokeswoman Sarah Sanders also said yesterday that “the president has made clear that any bill to fund the government must adequately fund border security,” without specially mentioning the border wall.

According to a Reuters/Ipsos poll conducted between Dec 21-26, more Americans blamed Trump for the government shut down. 47% said Trump was responsible, 33% said Congressional Democrats and 8% said Congressional Republicans. Meanwhile, 49% said they opposed to funding for the border wall, and only 36% supported it.

As shown in the Summary of Opinions at the December 19/20 meeting, BoJ board members sounded more concerned with global developments. The summary noted that “regarding the outlook for the global economy, risks have been tilted to the downside on the whole amid heightening uncertainties and a prevailing view that such situation will be protracted.”

Specially, it said “looking at the latest data on trade activities in China, both exports and imports marked negative growth on a month-on-month basis, which possibly indicates a deceleration in the Chinese economy”. For Japan, ” it cannot be said that the actual condition of restoration-related demand and production stemming from natural disasters has been strong”. Also, “recovery in exports to China has been weak, and exports as a whole also have shown weak developments.”

BoJ also maintained that “it is necessary to persistently continue with the current powerful monetary easing as the momentum toward 2 percent inflation is maintained.” And it warned that “trying to normalize monetary policy prematurely before achieving the price stability target could adversely strengthen the side effects.” The summary also noted that long-term yield should be allowed to “temporarily turn negative” and “move upward and downward more or less symmetrically from around zero percent”.

Later in the day, due to partial government shutdown, only Chicago PMI and pending home sales will be release from the US.