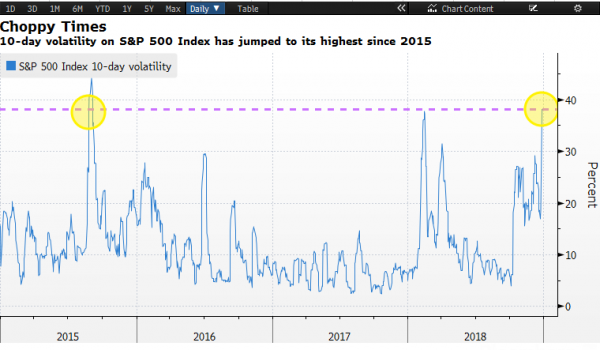 Talking about how aggressive the Fed is going to be towards their monetary policy in the coming year, traders have started to do something unusal. The argument of cutting an interest rate is becoming serious among traders and the odds of this event taking place in 2020 are standing at 50 percent. It doesn’t only stop there, because they also believe that the Fed will not be able to increase the interest rate next year.

This shows a clear disconnect, it seems like traders believe that Donald Trump will be able to get things done his way because the Fed has announced that there could be one to two rate hikes going in 2019. Remember, their previous projection was that there may be two to three interest rate hikes in 2019. Clearly, there is a disconnect between the Fed and the market expectations. This is only going to make the upcoming Fed meetings more interesting because everyone is going to dissect the Fed language even more intensely. Of course, this means more volatility for the dollar index and the equity markets.

Speaking of volatility, the wild swings on the Wall Street were able to push the Dow Jones back in green yesterday. The S&P 500 index experienced its biggest gain in eight years and the S&P500’s 10-day volatility soared to its highest level since 2015. The chart below shows that the 10-day volatility for the SPX has clearly surpassed its earlier level (formed in February). This means more opportunites for investors who like to day trade stocks.

Investors over in Europe are feeling optimistic and European futures are trading solid this morning as the 10-year bond spread between Italy and German narrowed to 251 basis points from its previous high of 326 basis points. Investors are somewhat comfortable with the idea that the current deal (about Italy’s next year target) between Italy and the EU is more favourable rather than adopting the path of fiscal penalties which would have created more chaos. Investors will be keeping a close eye on the upcoming German inflation data which probably have softened. The consensus is for a slowdown in this reading to 1.9% from its previous number of 2.2% and this is primarily due to lower oil prices already

Over in the United States, the US government shutdown is going to continue into 2019. House Republicans have said that they there have no plans for any votes this week. It is clear that Donald Trump is no mood of backing off from his current stance and he is determined that no bill will be signed unless the first priority is given to his agenda- getting the funds to build the wall.