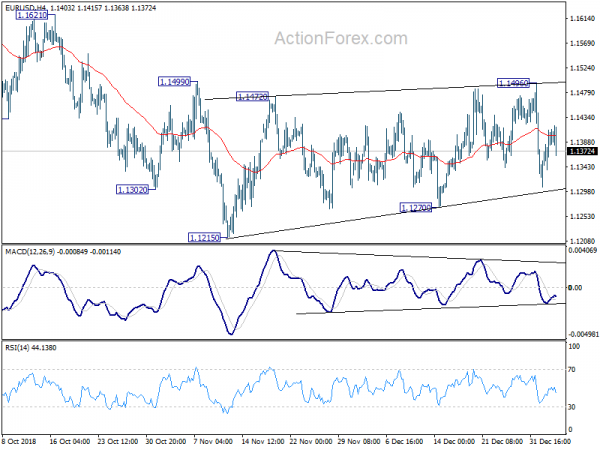 Global stock markets are staging a strong rebound today as China announced to cut bank reserve requirement to help the private sector and small companies. There is also a sense of optimism as China and US finally confirmed that trade talks will resume in Beijing early next week. US futures receive extra support from strong US employment data. DOW is set to open sharply higher again today. US 10 year yield is also trading up 0.0665 at 2.623, back above 2.6 handle.

Reactions in the forex markets are relatively muted though. Dollar is trading to rebound against European majors and Yen for now. But there is no clear commitment seen yet. As for today, Australian and Canadian Dollar are the strongest ones, followed by Sterling. Yen is the weakest one, paring this week’s strong gains. Swiss Franc is the second weakest as risk aversion eased. Focus will turn to Fed Chair Jerome Powell’s comments.

US non-farm payroll posted an overall impressively strong set of data. Headline jobs rose 312k versus expectation of 178k in December. It’s also the highest level since February 2018. Prior month’s figure was also revised up from 155k to 176k. Unemployment rate rose to 3.9%, up from 3.7%. But that’s due to surge in participation rate from 62.9% to 63.1%. Average hourly earnings rose 0.4% mom, above expectation of 0.3% mom.

China PBoC lowers RRR by 100bps to support the economy

The People’s Bank of China announced to lower the reserve requirement ratios (RRR) by 100 basis points to “support the development of the real economy, optimize the liquidity structure, and reduce financing costs”. The RRR will be lowered by 0.5% on January 15 and another 0.5% on January 25. Currently, the RRR stands at 1.4% for large banks and 12.5% for smaller banks. Additionally the Medium Term Lending Facility will not be renewed after expiry in Q1.

In the statement, PBoC pledged to “continue to implement a prudent monetary policy, maintain a moderate degree of tightness, not engage in flooding, reorientation and regulation, maintain a reasonable and sufficient liquidity, maintain a reasonable growth in the scale of money and credit and social financing, stabilize macro leverage, and balance internal and external balances.”

China’s Ministry of Commerce confirmed in a brief statement that there will be US-China vice ministerial level trade talks in Beijing on Jan 7-8. The date is confirmed in a phone call today. There will be “positive and constructive discussions” in following up to the agreement of Xi and Trump in Argentina. Deputy U.S. Trade Representative Jeffrey Gerrish will lead the team on the US side.

UK PMI services rose to 51.2 in December, up from 50.4 and beat expectation of 50.8. Markit noted “modest rises in business activity and new work”, “job creation eases to 29-month low”, ” business confidence at second-lowest level since 2009″.

Chris Williamson, Chief Business Economist at IHS Markit, noted that “the service sector typically plays a major role in driving economic growth, but is now showing worrying signs of having lost steam amid intensifying Brexit anxiety. The final two months of 2018 saw the weakest back-to-back expansions of business activity since late-2012 and highlight how clarity on Brexit is needed urgently in order to prevent the economy sliding into contraction.”

Also, “Combined with disappointing growth in the manufacturing and construction sectors, the meagre service sector expansion recorded in December is indicative of the economy growing by just 0.1% in the closing quarter of 2018.”

Eurozone PMI composite at over four-year low, CPI slowed to 1.6%.

Chris Williamson, Chief Business Economist at IHS Markit said “”The eurozone economy moved down another gear at the end of 2018, with growth down considerably from the elevated rates at the start of the year. December saw business activity grow at the weakest rate since late-2014 as inflows of new work barely rose.” Also, “the data are consistent with eurozone GDP rising by just under 0.3% in the fourth quarter, but with quarterly growth momentum slowing to 0.15% in December.”

Japan PMI manufacturing is finalized at 52.6 in December, up from November’s 15-month low of 52.2. Markit noted “solid output expansion on average over Q4, but demand pressures remain subdued”. Also, “business optimism at lowest since November 2016”. Joe Hayes at IHS Markit noted in the release that “Survey data provide reason to remain cautious on growth prospects. Most notably, demand pressures were relatively subdued. Exports also declined on the month amid reports of sluggish sales to Europe and China. The fall in confidence, the seventh time this has been the case in as many months, also suggests that companies are becoming increasingly less bullish on the year-ahead outlook. With the sales tax increase set to come into play, fears over the durability of demand conditions are worrying.”

EUR/USD dips notably after failing to sustain above 4 hour 55 EMA. But it’s, after all, staying in range of 1.1270/1496 and intraday bias remains neutral. On the downside, break of 1.1270 revive the bearish case that down trend from 1.2555 is still in progress. EUR/USD should then target 1.1186 key fibonacci level next. On the upside, however, sustained break of 1.1496 will revive the case of near term reversal, on bullish convergence condition in daily MACD. Bias will be turned back to the upside for 1.1621 resistance first. Break will target 1.1814 key resistance next.