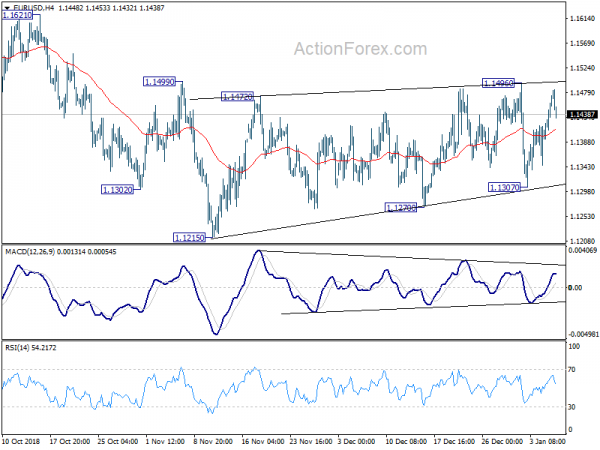 Dollar trades generally higher in Asian session today, rebound from near term support levels against Euro and Swiss Franc. The greenback is also seen losing some downside momentum against Sterling and Australian Dollar. Recovery in US treasury yields help and there is also some optimism on the result of US-China trade talks. Nevertheless, Canadian Dollar is even stronger for now, ahead of BoC rate decision on Wednesday. While BoC is generally expected to hold interest rate unchanged at 1.75%, it’s not a total consensus. There is risk of an hawkish outcome from he central bank

Technically, EUR/USD is held in range below 1.1499 resistance and eventual downside break out is still in favor. USD/CHF also recovered after testing 0.9789 temporary low. GBP/USD is held below 1.2814 resistance and thus, keeping near term outlook bearish. USD/CAD’s break of 55 day EMA now suggests that, at least, the decline from 1.3664 is going deeper towards 1.3118 fibonacci level. Yen crosses are now close to important resistance level and we’ll see if the rebounds could extend.

US Ross: Very good chance to get a reasonable settlement that China can live with

US Commerce Secretary Wilbur Ross expressed his optimism on US-China trade negotiation in a CNBC interview yesterday. He said “there’s a very good chance that we will get a reasonable settlement that China can live with, that we can live with and that addresses all of the key issues. And to me those are immediate trade. That’s probably the easiest one to solve,”

Regarding the slowdown in China, Ross said it’s a “big problem in their context of having a very big need to create millions of millions of jobs to hold down social unrest coming out of the little villages”. And that could create a “real social problem. But he added, regarding the slowdown, he is “not happy nor guilty. We expected this would happen.” But, “what has changed is China now understands how independent they are on us.”

US delegation is having the second day of trade talks in Beijing today.

Reuters reported, with unnamed sources, that the EU is considering ways to help UK Prime Minister Theresa May to secure support from the parliament for the Brexit agreement. The Irish backstop is the key issue in focus. It’s politically a solution to avoid a hard Irish border that is not intended to be triggered. Even if it’s triggered, the backstop would be temporary. However, legally, UK is not allowed to quit the backstop unilaterally. EU officials are said to be considering the reassurances needed. One resolution is a commitment by EU to have a UK-EU free trade agreement in place by the end of 2021. That would help avoid triggering the backstop.

Separately, there are rumors that UK and EU officials are discussing the possibility of extending the Article 50 withdrawal notice, if the Brexit deal cannot be approved by the parliament by March 29 Brexit date. But the Prime Minister office reiterated to Telegraph that “The PM has always said that we would be leaving the EU on 29 March 2019, and we would not extend Article 50.”

Debate on the Brexit agreement will resume in Commons this Wednesday. A meaningful vote is scheduled for Tuesday, January 15.

Australia trade surplus narrowed slightly to AUD 1.93B in November, and missed expectation of AUD 2.18B. Import rose 1.7% while exports rose 1.4%. Swiss unemployment rate, German industrial production and Eurozone confidence indicators will be featured in European session. Later in the day, Canada and US will release trade balance.

EUR/USD retreats mildly today as it faced some resistance from 1.1496. And intraday bias remains neutral for now. At this point, price actions from 1.1215 are still viewed as a corrective pattern. Thus, downside breakout is favored. On the downside, break of 1.1307 minor support will turn bias back to the downside for 1.1215 low. Break will resume down trend from 1.2555 to 1.1186 key fibonacci level. Nevertheless, sustained break of 1.1499 resistance will suggest near term reversal and bring stronger rebound back to 1.1621 resistance first.

Previous: GBP/USD Gaining Strength Above 1.2720
Next: Apple and Tesla shares on the blockchain could be the next big thing in crypto