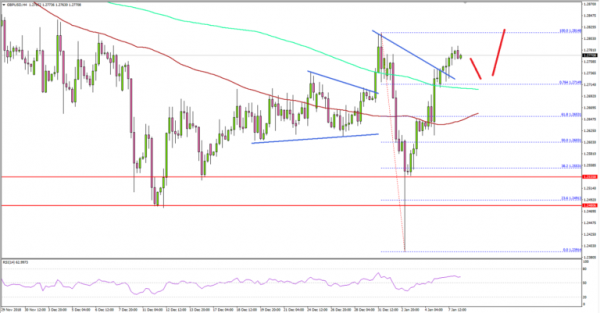 On the other hand, if there is a downside correction, the previous resistance near 1.2720 and the 200 SMA are likely to act as strong supports.

Recently in the US, the ISM Non-Manufacturing Index for Dec 2018 was released by the Institute for Supply Management (ISM). The market was looking for a decline from the last reading of 60.7 to 59.0.

However, the result was even disappointing as the decline in the ISM Non-Manufacturing Index was more than 2 points and the index dropped to 57.6.

Both EUR/USD and GBP/USD gained traction this week and it seems like there could be more upsides in the coming sessions.

Previous: A Bit Of The Feel-Good Factor Has Temporarily Abated
Next: Dollar Higher after Defending Support, Canadian Even Stronger