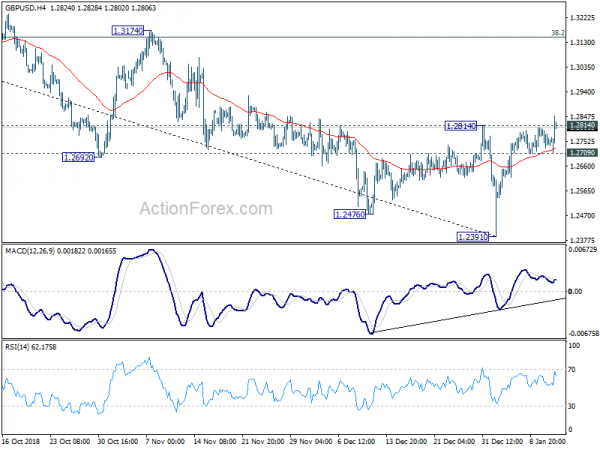 Sterling surges broadly today on rumor that there will be delay in the Brexit date. Even though the government came out quickly denying intention for Article 50 extension, the Pound stays firm. As next Tuesday’s Brexit meaningful vote looms, it’s just getting less and less likely for the Brexit bill to get through the Parliament. Prime Minister Theresa May will have to table a Plan B within days. And no matter what path May would seek, referendum or election or something else, a delay of Brexit is inevitable. So the rumor is actually not so much a piece of news.

Anyway, the Pound is the second strongest one for today, following New Zealand Dollar and followed by Australian Dollar. Dollar remains the weakest one for today and the week after CPI release provides little inspiration. Canadian Dollar is the second weakest as WTI crude oil seems to be losing upside momentum. Euro is the third weakest.

Technically, GBP/USD’s break of 1.2814 resistance is taken another an early sign of trend reversal. And that could add to the case of Dollar bearish trend reversal too. We’ll how things develop ahead. The more immediate focus just before weekly close is 51.59 in WTI oil and 1.3259 minor resistance in USD/CAD. Break of these levels would suggests short term topping in WTI and CAD.

US headline CPI slowed to 1.9% yoy in December, down from 2.2% and matched expectations. Core CPI was unchanged at 2.2% yoy, matched expectations too. Dollar release the weakest one for today and the week as Fed officials emphasized “patience” before the next rate move. In particular, as Fed Chair Jerome Powell said yesterday, “especially with inflation low and under control, we have the ability to be patient and watch patiently and carefully as we”. Today’s CPI readings don’t express any objection to Powell’s line of logic.

Sterling spiked higher earlier today after the Evening Standard reported that it’s increasingly likely that Brexit will be delayed beyond March 29. Unnamed senior minister was quoted saying “the legislative timetable is now very very tight indeed… certainly, if there was defeat on Tuesday and it took some time before it got resolved, it’s hard to see how we can get all the legislation through by March 29.”

However, Prime Minister Theresa May’s office was quite to come out to deny the rumor. Her spokesman Alison Donnelly said May has ruled out extending Article 40. And, “it’s government policy that this is not something we are going to do.”

Commenting on today’s GDP figures Head of National Accounts Rob Kent-Smith said, “Growth in the UK economy continued to slow in the three months to November 2018 after performing more strongly through the middle of the year. Accountancy and housebuilding again grew but a number of other areas were sluggish. Manufacturing saw a steep decline, with car production and the often-erratic pharmaceutical industry both performing poorly.”

UK CBI Director-General Carolyn Fairbairn is going to want the government that no-deal Brexit could cause -8% decline in GDP, in a speech today.

In an article at CBI’s website, Fairbairn talked about the “dangers” of no-deal Brexit. She warned that “The economic consequences would be profound, widespread and lasting. GDP would decline by up to 8%, meaning less money for our public services and those who rely on them.”

There would be “new costs and tariffs” and ports would be “disrupted”. Trade deals with countries like Japan, South Korea and Turkey would be “lost”. Services sector would be “at a sharp disadvantage”.

In short, She said “no-deal cannot be managed”. On next week’s vote in the parliament, she said “And next week, they face a test. If they meet it with yet more brinkmanship, the whole country could face a no-deal, disorderly Brexit. Use our Portfolio of forex robots reviews…

Canadian Prime Minister Justin Trudeau said in a televised Q&A that he’s working on pressuring Trump to drop steel and aluminum tariffs. The measures were imposed last May using national security as excuse. And it stays in place despite the signing of the so called US-Mexico-Canada (USMCA) trade agreement in November.

Trudeau said “We have already been working with members of Congress, with governors, with business interests who are being affected negatively by these tariffs … to put pressure on the President that in the process of ratification, they should remove those steel and aluminum tariffs”.

Asked why he still signed the USMCA with steel tariffs in place, Trudeau defended and said securing the deal “at a time of unpredictability and protectionism in the United States was a massive priority for all Canadians”.

NOTE: You can not find the right trading strategy? if you have no time to study all the tools of the trade and you have not funds for errors and losses – trade with the help of our Keltner channel forex robot developed by our professionals. Also you can testing in Metatrader our forex scalping robot free download .

In the bigger picture, whole medium term rebound from 1.1946 (2016 low) should have completed at 1.4376 already, after rejection from 55 month EMA. The structure and momentum of the fall from 1.4376 argues that it’s resuming long term down trend from 2.1161 (2007 high). And this will now remain the preferred case as long as 1.3174 structural resistance holds. GBP/USD should target a test on 1.1946 first. Decisive break there will confirm our bearish view.