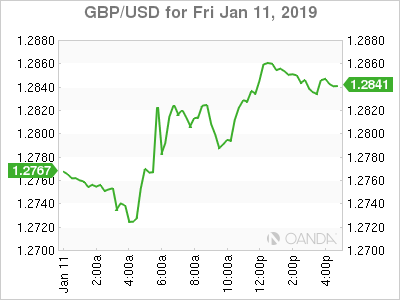 The US dollar continues to weaken in 2019, this week’s decline was supported by the Fed’s Minutes and a busy week of FOMC talk that cemented views that the Fed can wait on the next interest rate hike.  The narrative now shifts from central bank focus to Brexit and earning seasons.  Prime Minister May’s Brexit deal is expected to be voted down in Parliament on Tuesday.  There is no strong consensus as to what is next for Brexit, but after Tuesday, we will learn a lot more.  The other key driver for the next big move in risk appetite could come the beginning of a very long earning season.   We have seen many technology and consumer discretionary companies warn on their outlooks already.

Looking at cable, some might find it hard to believe that the end could be near for PM May.  She is widely expected to lose the Parliament vote on Tuesday and many are expecting the exit day or March 29th to be postponed, despite her office refuting any possibility of that happening.  After losing the Tuesday vote, there are 5 scenarios that could occur.  The scariest scenario for the UK is if nothing else happens and we see a no-deal Brexit.  Cable could fall anywhere from 5 to 10 percent and while it is the least likely result, it is still possible and should not be ruled out.  If she loses the vote by a close margin, she could renegotiate with the EU, but she will have only few days to try to come up with a Plan B and get EU concessions.  A general election is another potential scenario, but that would require May getting two-thirds of MPs supporting the call.  A vote of no confidence has a good chance of occurring as Labour has been very clear in stating they will call a formal vote of no confidence in the government following May’s defeat.  If the government loses the vote, we may not see a clear alternative choice and we could see a general election.  Another referendum could be a fifth scenario, albeit a longshot, that would require an extension of Article 50, this however is unlikely to occur before the March 29th deadline. (if you want to trade professionally use our forex advisor download, Look our videos of automated trading at forex… )

Oil had its best week in two years on a soft dollar and as the OPEC + production cuts are being implemented.  Friday’s round of profit taking saw West Texas Intermediate crude snap the longest streak of consecutive session gains in nine years.  This week’s rally took oil out of bear market territory and the backdrop of a patient Fed and progressive trade talks among the US and China have been very supportive for oil markets.

Fed Chair Powell’s latest interview on Thursday was a reiteration of the Minutes of the December 19th meeting, noting that policymakers regard the economic outlook as solid, despite intensifying downside risks.  The Fed is clearly going to be patient on the next hike and will wait for further clarity on risks to global growth and the affect to the US economy.  For the US, rebounds are expected in New Home Sales, Empire Manufacturing, factory orders, housing starts and the Philly Fed Business Outlook, while declines are expected with the PPI Final Demand, Building Permits, University of Michigan Sentiment, and Industrial Production.  Softer data prints could further support the Fed’s dovish bias. Use our Portfolio of forex robots reviews…

Two reasons stock markets have been roaring higher are from reassurances that the Fed is in a place where it can be patient and flexible and secondly, optimism from mid-level trade talks between the US and China.  Investor appetite for the next major move in stocks is likely to take a queue from the beginning of earning season.  Citigroup kicks the season off on Monday.  Tuesday we will see results from Delta, United Continental Holdings, and JP Morgan.  Goldman Sachs and Bank of America report on Wednesday.  Thursday we will hear from Netflix and several other financial companies. Schlumberger and Kansas City Southern report on Friday.

The government shutdown could also start having a greater impact on economic data.  A prolonged shutdown could end the longest streak of continuous job growth, which currently stands at 99 months.

The G20 Finance Ministers and Central Bank Governors meeting will take place between January 16th and 18th in Tokyo.  This is not to be confused with the major G20 Osaka Summit that will take place at the end of June.  The first day will focus more on technological innovation and development.  Bank of Japan Governor Kuroda will deliver a key speech on the second day, which focuses on monetary policy and financial system during demographic changes.  The third day is meetings amongst the governors and ministers.

Previous: Earnings season may turn up some stock market winners after December’s battering
Next: EUR/GBP: Levels to Watch Through a Critical Week